SAVANNAH has its share of women who own the national stage.

Some continue to elevate our city’s stature, like Flannery O’Connor and her legacy of blowing the minds of eleventh grade English students everywhere.

Others have built high-profile media careers only to bring us TMZ shame. (Dear Paula Deen, we will always adore you, but you might consider STAYING OFF THE INTERNET FOREVER.)

There are also those whose accomplishments were subsumed during their lifetimes but later revealed, notably Catharine Littlefield Greene, down in the history books as the spunky wife of Revolutionary war hero Nathanael Greene and now widely believed to be the true inventor of the cotton gin.

(How hard it must’ve been for feisty Caty to keep her bonnet on while Eli Whitney mansplained “his” miraculous contraption to the patent office!)

But nobody puts our brilliant babes in a corner these days, and July has been a banner month for talented women representing our fair little town.

It all started at the MTV Fandom Awards, when Hunger Games ingénue Willow Shields accepted a trophy while wearing a flowing red gypsy dress created by Connect’s 2015 Best Local Fashion Designer Brooke Atwood. Featuring Brooke’s signature heavy metal flourishes and emblazoned with cheeky naked baby dolls, the now-famous frock caught the eye of celebrity stylist Law Roach and has been splashed across Instagram and numerous “Eeek or Chic?” polls, demolishing the notion that Southern style must include grosgrain ribbon.

While our Brooke is used to A-Listers like Alyssa Milano and Vampire Diaries’ Candice Accola donning her fabulous duds (hello, even Beyoncé has shown interest), Shields’ red carpet tribute took her by surprise.

“I didn’t even know Law had picked the dress for her until I saw it online!” she exclaims. “I’ve had stars wear my clothes before, but this is a whole other level.”

Also experiencing a leap to a higher stratum this month is metalsmith maven Meredith Sutton. It seems the jewelry artist’s Instagram feed piqued the interest of iconic NYC menswear designer Michael Bastian, and he sent a message wondering if she might be interested in supplying some jewelry for the launch of his new women’s line. In less than two weeks, no big deal.

One of the SCAD jewelry department’s most prolific graduates, Meredith regularly supplies pieces to boutiques in Los Angeles and beyond, and her work is ubiquitous around Savannah (you may have seen her Kobo Gallery polo cuffs adorning the wrists of some of the city’s most prominent women; I’m almost positive that they can deflect bullets à la Wonder Woman, but don’t ask me to prove it.)

Not one to hem and haw in the face of a challenge, the artist ensconced herself inside her studio with her torch, her dog and a barrel of coffee and churned out a dozen new pieces. And voila! Last Wednesday at the first annual men’s New York Fashion Week, the world got a sneak peek at Bastian’s feminine debut, accessorized with Meredith’s oversized horseshoe necklaces and stacked brass bangles.

This creative feat is made even more impressive by the fact that Meredith is also the marketing force behind Service Brewing Co., the craft brewery started last year by her boyfriend, Kevin Ryan. SBC has achieved national recognition for its tasty brews and for donating portions of its sales to veterans’ charities. (Full disclosure: I compose SBC’s beer labels, so enjoy that 4-point type next time you crack open a cold Ground Pounder.)

As Meredith soldered for her Fashion Week spotlight, she and Kev were also soldiering through Georgia’s new-and-improved brewery laws and planning SBC’s first anniversary party this Friday, July 24.

(The Florence’s Kyle Jacovino is cooking, and Futurebirds is playing! Read more on page 45.)

It’s a lot of responsibility for this low-key lady, but not much fazes a woman who literally bends metal to her will.

And if it weren’t enough that Savannah’s designers are taking over the style pages, we’ve also got a woman in Washington.

And guess what?! GPB’s Sarah McCammon (r.) is going to Washington!

Georgia Public Broadcasting bureau chief Sarah McCammon embarks on a 16-month stint at NPR this week as a lead candidate reporter for the 2016 political campaign, a momentous election season for women everywhere, no matter how you feel about Hillary. Or Carly Fiorina.

Sarah covered the 2012 election for Iowa Public Radio and has brought accuracy and alacrity to the airwaves since she joined GPB Savannah in 2013, earning multiple awards from the Atlanta Press Club and the Associated Press. The native Midwesterner became excited by politics at an early age and worked as a Senate page when she was just 16, but realized a career in government wasn’t quite her scene, after all.

“I realized I didn’t want to take sides, that I’m more interested in observing. I think it’s really important for democracy that there is someone watching and presenting information in an impartial way,” she mused at a going-away gathering in her honor.

“Not that I don’t have opinions, but my job is to be objective.”

It was, to quote a refrain from female rapper Kreayshawn’s 2011 smash hit “Gucci Gucci,” “one big room, full of bad bitches.”

Sarah’s also a mother to two hilarious boys, and because the patriarchy is still hanging on to its terrible toupée with its liver-spotted hands, some of you may be wondering how she’ll manage her familial duties while she’s in DC. The answer is that her husband, Armstrong philosophy teacher Christopher McCammon, is perfectly capable of handling things at home while his wife covers this historic presidential election.

Maybe one day we’ll all learn to be concerned with how badass women and men figure out the whole work/life balance thing. (Hey, knock Bernie Sanders all you like, but paid leave for both parents and free childcare sounds pretty helpful, no?)

Until then, rest assured that our Savannah dames have it covered.

Speaking of equilibrium, I’ll be taking the next few weeks off to recalibrate and cultivate a state of restorative hebetude. I’ll be back mid-August with more (Civil) Society columns, but in the meantime, I guess I’ll have to figure out other ways to honor those whose triumphs might be overlooked. 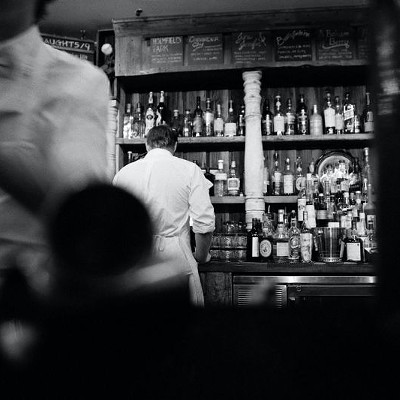