Notable concerts worth a closer look 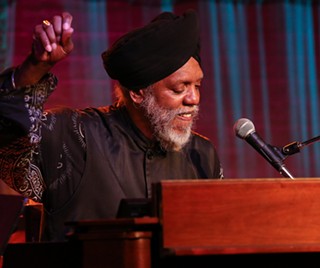 If you’re into Dave Rawlings Machine, Punch Brothers, or A Prairie Home Companion, it’s highly likely you’ve already heard the voices of Hawktail. The troupe’s talented members are all involved in those projects, and Hawktail was born from the trio Haas Kowert Tice (regular Savannah Music Festival attendees may remember their Fest performance in 2016). Together, the four-piece, featuring Brittany Hass on fiddle, Dominick Leslie on mandolin, Jordan Tice on guitar, and Paul Koward on bass, is blazing a new trail in acoustic music.

Catch them at lunchtime on Wednesday, or head to the Morris Center in the evening to see Hawktail share a bill with the acclaimed Barr Brothers.

Fans of the irreplicable tones of the Hammond B-3 organ won’t want to miss Dr. Lonnie Smith and his trio. A National Endowment for the Arts Jazz Master, Smith is 73 years into his life as a leading B-3 voice, earning “Organ Keyboardist of the Year” for countless years by the Jazz Journalist Association. It’s not unusual to hear songs by the likes of Beck, Jimi Hendrix, or John Coltrane coming from Smith’s organ.

Dr. Lonnie Smith and his Trio play at 12:30 p.m. and reconvene at 6 p.m. to perform with Sullivan Fortner Trio.

Jazz on the River

Looking for some Music Fest on a budget? Head down to Rousakis Plaza and enjoy a free, open-air showcase of the country’s most talented high school jazz orchestras. For over a decade, Swing Central Jazz has allowed high school students to learn from some of the nation’s best players, and that is something worth celebrating.

Anyone who caught Lee Fields’ 2017 Savannah Stopover or 2011 Savannah Music Festival performance knows how the talented singer can fill a room with warmth, love, and a whole lot of soul. As someone who’s been in the soul game since the ‘60s, the powerhouse performer isn’t one to miss. Fields performs with The James Hunter Six, another returning SMF soul favorite.

Experience two lifetimes of incredible musicianship. Bill Frisell, a master of his unique amalgamation of jazz, blues, and rock guitar, has worked with the likes of Elvis Costello, Los Angeles Philharmonic, Suzanne Vega, John Zorn, Ginger Baker, Vic Chesnutt, Marianne Faithfull, and many, many more. One of the most in-demand guitarists in contemporary music, Frisell’s command of six strings is a pleasure to witness live.

Julian Lage demonstrates acoustic prowess as a bandleader, composer, and educator. His talents were captured early on in the Oscar-nominated doc Jules at 8—since then, Lage has performed at Savannah Music Festival many times and is Assistant Director of SMF’s Acoustic Music Seminar.

Daniel Hope and his colleagues always dream up fantastic bills for SMF, and this year is no different. With violinist Simos Papanas, Hope will interpret works by reknown European composers and lesser-known Bulgarian and Greek composers. As the program nears its end, enjoy classic Balkan and Middle Eastern works and beyond.

The inimitable storyteller Rosanne Cash has earned three Grammys since she last performed at Savannah Music Festival. The daughter of Johnny Cash himself, she is Creative Partner with Carnegie Hall, served as Artist-In-Residence at the Country Music Hall of Fame, and has been inducted into the Nashville Songwriters Hall of Fame. At her last SMF engagement, Cash performed the entirety of her 2013 record The River & The Thread; this time, she’ll play with her co-writer, producer, guitarist, and husband John Leventhal.