Join the voyeurism at landingsbirdcam.com 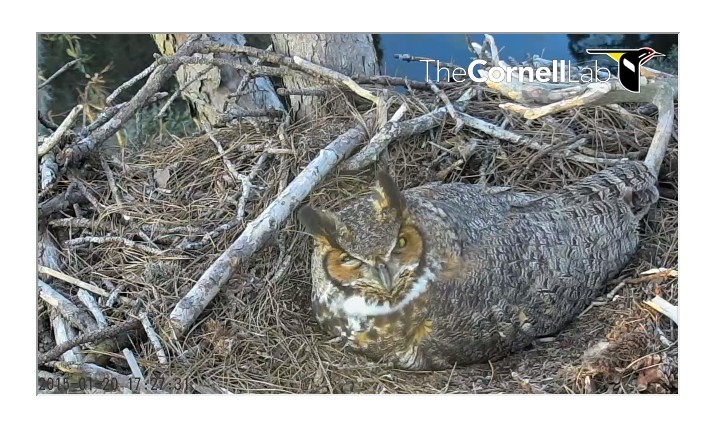 The Owl Who Shall Not Be Named continues to sit on her eggs atop a pine tree on the edge of a golf course on the Landings.

FORGET YOUR Buzzfeed quizzes and futzing with Instagram filters: There's a new timesuck in town, and it's broadcasting from the marsh next door.

The Landings Bird Cam went live two Fridays ago with a 24/7 feed of a female great horned owl brooding on a pair of eggs, and frankly, I haven’t gotten a whole lot of work done since.

Emails go unanswered and the laundry pile overfloweth as I click “refresh” throughout the day and night to watch this magnificent creature.

What is the owl doing now? is my first thought of the morning and every two minutes hence.

What about NOW? as I arrange my phone on the pillow before bed.

Not so much, but what could be sexier than real, live wildlife voyeurism?!

It doesn’t help that the quality of the video feed is so damn fine. Every striation of her banded feathers shows up in the sunlight, the outline of her heart-shaped face clear as a pen stroke and the imperial tufts on her head ruffling gently in the wind. At night, infrared keeps each twig of the nest crisp and clear.

We have the folks at Skidaway Audubon to thank for this alluring distraction. The local environmental nonprofit raised $15K to have international extreme video expert Tim Sears install two Sony SNC-WR630 cameras 85 feet atop the loblolly pine last summer with the intention of watching the aerie’s original inhabitants:

A couple of bald eagles had raised several seasons of eaglets in the five-foot wide lair, but only one of the pair returned for a short visit this fall—perhaps due to a tragic aviary drama of which we’ll never know the details.

Our rapturous raptoress laid her first egg on New Year’s Day and the other a few days later. According to Skidaway Audubon’s partners at the Cornell Lab of Ornithology, owl eggs take between 30-37 days to incubate, which could put the first shell crack as soon as this weekend.

Until then, it’s a subtle type of action. Our owl mama rotates her head 180 degrees one way, then the other, a golden-eyed sentinel of all that passes by her perch. Once a day or so, she gently turns over the eggs with her compact beak, making sure the warmth is evenly distributed.

She usually gives a couple of hoots at sunrise, but mostly the soundtrack consists of the peeps and caws of other birds and the occasional lawnmower.

Our feathered friend leaves the nest briefly at dawn and again at dusk, and the Auduboners believe these are rendezvous with her mate, who hasn’t been seen since the eggs arrived and may be bringing her delicious dead things to eat in another tree if he is any type of gentleman.

We all know owls are nocturnal, but like most mothers, this one seems to be perpetually half-awake and slightly annoyed.

Sometimes she looks straight into the camera and I swear, she can see me.

That’s ridiculous, of course. But a girl can fantasize, cain’t she?

“Sure, it would be good for publicity. But when biologists deal with wild creatures, they don’t give them names.”

Bummer. However, I am not a biologist, so we’ve been placing bets on either “Owleanor” and “Beyonceowl” around the office.

I was worried that my constant lurking made me some kind of secret owl pervert, and Siler kindly volunteered to show me the nest in person last week. I enlisted my colleague, the equally owl-obsessed Anna Chandler, to accompany me.

“Yeah! Maybe we can find a food pellet and dissect it!” grinned Anna, wringing her hands gleefully as we rolled past the Landings main gate into the serene paradise of Savannah’s toniest neighborhood.

We picked up Jim at his house and parked along the marsh. He led us past a small pond prickling with tadpoles, and we tiptoed through a backyard of manicured azaleas to the edge of the golf course. We could see the underside of the eagle-turned-owl’s nest in the bald branches, and Jim explained that the tree is already half-dead from a pine bark beetle infestation. Anna tromped off into the bushes to look for the neatly packaged remains of our owl’s last meal.

A retired computer consultant and a Georgia Master Naturalist, Jim has lived in the Landings for 20 years, enjoying the combination of amenities and access to nature. He admits he’s given up his golf membership for now, preferring to help Skidaway Audubon with its various projects, including relocating clutches of turtle eggs from diamondback terrapins that come up from the marsh to nest in the golf course sandtraps.

It’s generous of these Landings birdlovers to share their window that allows the rest of us up-close owl observation and appreciation, and I thanked Jim as Anna examined a small skull of an indeterminate species.

Ms. Owl Herself was only a mere 85 feet above us, but we didn’t even catch a glimpse of her. Yet it was just so lovely to be outdoors instead of staring into a monitor, and I inhaled deeply.

I had fallen into a brief meditative stupor when Anna sidled up next to me.

“I have a pocketful of bones,” she whispered, wagging her eyebrows behind her horn-rimmed glasses.

Poor Jim already seemed traumatized by his ride in the Absurdivan, which is short a hubcap and has a menagerie of plastic animals glued to the dashboard (including several owls), and he nodded wanly at Anna’s carcass collection. We were thinking of ourselves as owl superfans, but I think we might have come off as a little creepy.

Back at my computer watching the owl half-sleeping in her own browser window, I thought about what it means when our most intimate interactions with wildlife happen on a screen.

As I learned, being near an animal doesn’t necessarily afford the details we can marvel at via webcam. It is undeniably a wonderful use of technology, one that educates and helps protect habitats.

But does it really increase our connection with the natural world? Or is that just a convenient delusion as we spy on on it from the comfort of our desk chairs?

More uncomfortably, does peeping on wild animals somehow diminish their very wildness, the way the internet makes it so easy to remove the humanity from sex? Our society is already so detached from nature, and I’m not sure it helps to put it in the same streaming format as Real Housewives of Atlanta.

Maybe Jim is right; giving our owl a name only reduces her authentic magnificence.

Though nothing short of the Apocalypse is gonna keep me from watching those owl babies being born.

Still, I can’t help but feel like a creep—especially since she just looked right into the camera and turned her back. cs 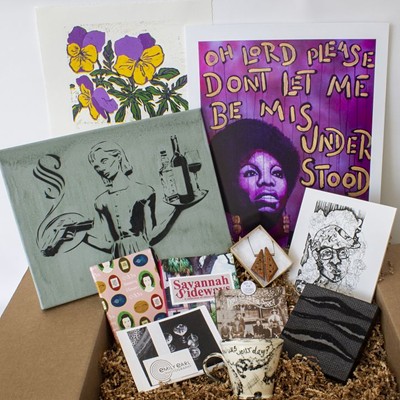