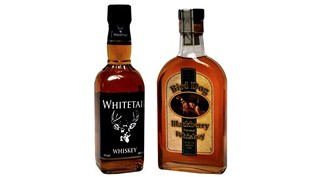 A tasty drop of Whitetail or Bird Dog Raspberry Whiskey, anyone?

Bow hunters may be practicing for the upcoming deer hunting season, but those of who score our bag limit at the package store may want to keep lookout for a whitetail of a different sort.

Whitetail Whiskey recently hit shelves and is proving there continues to be a market for classic liquors flavored to soothe the youth market.

Whitetail is caramel flavored — an abomination to whiskey purists on either side of the pond. Frankly, I like to think of it as a gateway whiskey that I can use to bring newcomers to the bar — and then introduce to truly fine whiskey.

My insiders in Kentucky tell me the base for Whitetail is Heaven Hill juice with added caramel flavoring. At 80 proof, its a lightweight for sure, and a perfect foil for creative mixologists and chefs who want more caramel from whiskey flavor.

And that’s what I experienced. Whiskey by nature has lots of caramel backbone, and Whitetail kicks that characteristic into overdrive.

This brand and the next whiskey each earned gold medals in the 2010 San Francisco World Spirits Competition. Each is so new that product websites are incomplete — and industry tasting notes are a mixed bag.

Bird Dog hunts well on cracked ice, but I suspect talented bartenders will find ways to may it howl.

It’s another 80–proof whiskey, which make it conducive to mixing with other spirits. I found the blackberry flavor pronounced but not so overwhelming as to cloud the underlying whiskey.

The quintessential New Orleans cocktail was named by John Schiller in 1859 upon the opening of his Sazerac Coffee House in New Orleans. Both most likely derive their name from a popular brand of Cognac, Sazerac–de–Forge et Fils.

To make a traditional Sazerac, an old fashioned glass was prepared with a swirl of absinthe, the legendary Green Fairy concocted of wormwood. When absinthe was banned in the US, it was replaced by pastis or Herbisant.

In 2007, absinthe was again allowed on U.S. soil and American producers began crafting the legendary spirit. I sampled one of them, St. George Spirits Absinthe Verte, and was blown away by its powerful nose, 120–proof wallop and tantalizing flavor.

Distiller Lance Winters has been fine–tuning his absinthe recipe for more than 11 years. His version is beautifully made, layered, complex and delicious.