Where: The Gallery at Sulfur Studios 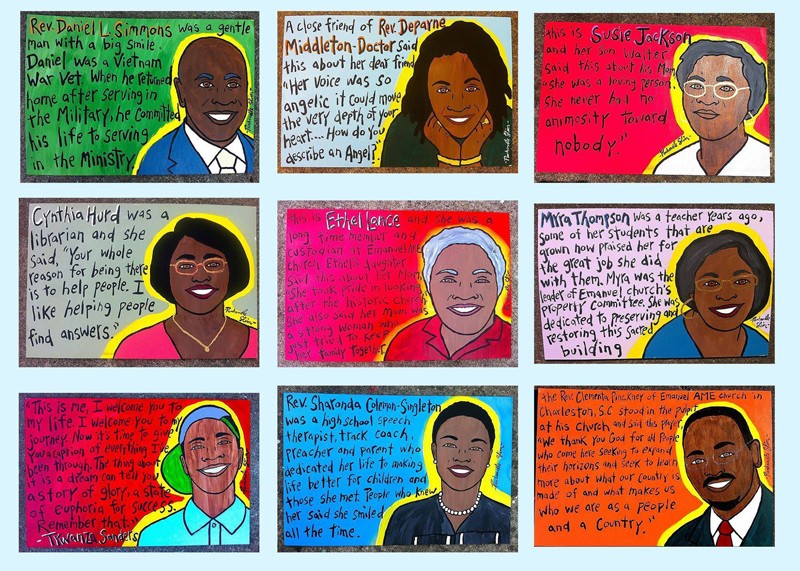 Slim’s tributes to the Emanuel Nine.

Perhaps you’ve scrolled past Slim’s bold paintings in your Facebook feed. Maybe you caught a glimpse of an original work on the side of the road while driving the kids home from school. You may have even seen his wooden “Wes Daniel for Mayor” petition down at Hang Fire this weekend (whether bar proprietor Daniel will take Slim up on his gentle nudge is to be determined, but by the end of the night, the petition was completely covered in signatures).

Slim’s work is easily recognizable, characterized by a flat headshot and accompanying quote.

“I like to keep it positive and let the paintings talk for themselves,” he says. “Since I use everyone else’s quotes, I let them speak, and they say something.”

A creator of “art for folk,” Slim’s garnered a kind of cult following for his pop-up galleries—he may corral a bunch of work for a showing in an abandoned lot, or leave a painting on the side of the road to be found by a lucky passerby. The beautiful accessibility of Slim’s art has created opportunities for his work to appear in a variety of spaces, including a recent exhibition at Jepson Center For the Arts.

“That was pretty easygoing,” Slim says of the big museum show. “I was surprised. The paintings were up there, then I had [a show] on 37th and Price at that little gas station. It was fun to have it in two places.”

For Slim, the most exciting element of the Jepson show was reaching a new audience: kids on field trips, including students from his own children’s school.

“Now when I go to their school, a lot of the kids notice me as an artist,” he says.

Slim’s work recently received worthy attention in the wake of the mass shooting at Charleston’s Emanuel African Methodist Episcopal Church. In response to the tragedy, he was inspired to learn more about the victims and create portraits honoring each of the Emanuel Nine.

“I took them over to the church I think a couple days later,” he recounts. “There was quite a crowd of people bringing flowers and notes. I went over with the paintings with my children and a neighborhood friend kid, was able to find a spot to put them, talked to the people of the church—it was a great experience.”

Leaving a note with his artwork, Slim hoped the pieces would make their way back to the victim’s families.

“I don’t know where they all ended up,” he says. “I know some ended up with family members—I’ve been in touch with them. They’re becoming friends, and it’s been really good. I get to learn more about them and what they’ve been doing since then. One woman, Ethel Lance—she was the oldest one out of the nine that died—I talked to her daughter, who lives in Dallas now. She’s doing a lot of activism against guns and speaks to Congress.”

Slim has taken his own grassroots approach to speaking out against gun culture, recently placing his paintings at the entrance of a local gun show.

“Basically, I was going to go over there and see for myself what this is all about,” he explains. “It’s a very different culture to me. It was scary. I wasn’t fearful, but these people going in, buying guns, and walking out just terrified me for how simple and normal it is to so many people.”

Slim arrived at the Savannah Civic Center with a painting of Dr. Martin Luther King, Jr., reading “after Charlton Heston heard Dr. King speak at the march on Washington in 1963 he said, ‘like most Americans I expressed my support for civil rights largely talking about it at cocktail parties I’m afraid”.

He stood nearby and watched the reactions of people encountering his work; it wasn’t long until the folks in charge politely asked him to take the piece and leave.

“They said it was making their customers uncomfortable,” Slim says. “I felt like my job was done.”

Though he doubts that the piece changed the minds of any gun show attendees, he points out that that kind of documented agitation brings comfort to folks who share his beliefs.

Slim has long used nontraditional spaces for his paintings, often placing works in juxtaposition with existing signage, snapping a photo, and uploading it to Facebook (a classic Panhandle Slim move was his placement of a David Bowie portrait with the quote “I am afraid of Americans” in front of a gun show billboard).

Meant to provoke, console, or inspire thought, Slim’s public works have become highly desirable, with fans keeping a sharp eye on his Facebook feed in hopes of snapping up a painting of their own.

“Sometimes, I wish they would stay out longer,” Slim says. “When I was first jumping on ship, I thought, ‘nobody would want this’—that wasn’t even the mentality. What’s going to happen? Somebody from the city will pick it up and throw it in the dumpster. And if that’s what happened, fine. But I’m glad people are taking them home and enjoy them.”

Some installations are originally intended to comfort the neighborhood’s residents. At the historic Meldrim Row apartments, set to be torn down and replaced with a new police precinct, Slim left a painting to, as the caption on his shared photo stated, “bless the place.”

“Sometimes, I wish they would stay out longer,” Slim says. “It is what it is. Once it’s up, it goes wherever. I don’t really think too much about it.”

Be it the Jepson, an abandoned gas station, or new venue like Sulfur Studios, Slim curates his shows using the same tried-and-true method: grabbing an assortment of paintings out of his expansive collection and taking them up to the gallery. He’s looking forward to utilizing Sulfur’s ample wall space and hopes to fill it with solo works as well as pieces he’s created with children.

The show runs from September 2-6.