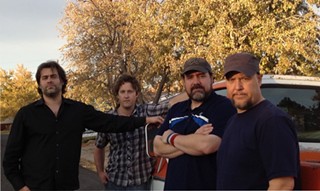 When Widespread Panic guitarist Michael Houser succumbed to cancer in 2002, he left behind a devastated wife and two small children, a band that loved him as a brother, and millions of worldwide fans.

In the latter two groups was Sam Holt, who'd been the innovative musician's guitar tech since the late 1990s.

Holt, who visits Savannah March 15 for a gig at Satisfied, had been a longtime Panic fan who religiously taped their shows from the audience (like many jam bands, Panic approved the practice and always had a roped-off area ready for "tapers").

A Tennessee native, Holt was in college, studying to be an audio engineer.

He was also a guitar player, and when he was offered — through a friend of a friend — the job as Houser's on-tour technical guy, he jumped at the chance.

Not that he knew what he was doing at first. In fact, he joined Panic on the road three days after getting the offer.

"It was trial by fire," Holt says. "I had to figure it out for myself. It was definitely shaky at the beginning, but it worked out."

The guitar tech's job is to keep the musician's instruments and equipment in top shape, and ready to go before the performance.

"He had a pretty straightforward rig," Holt explains. "His main effect was the volume pedal that went into the effects loop. He worked that thing like nobody, really. It was so trippy-sounding. And he was always moving it; it never really stayed in one place.

"Most people just plug their guitar into the volume pedal, and plug the pedal into the front of the amp. There was a delay pedal after the effects loop, so the more he pushed it down, the more delay he would get. He didn't have a big rack of effects — he did a lot of it with the volume pedal and his fingers. That was where his tone came from."

He clicked with the guys in the band — particularly with Houser — and before long was part of the family.

"It was pretty rewarding," he says. "I remember, at the end of that tour, he said to me 'Man, my rig hasn't sounded that good in a long time.' And that made feel so good. Because, you know, I put a lot of work into it. A lot of time and attention to detail."

Widespread Panic regrouped after Houser's death, and over time Holt began to get invited onstage. In 2006, he played lead for most of the band's summer tour, before Jimmy Herring — who was finishing other commitments — could come aboard as the new lead player.

Holt had his own band by then, Outformation, with an album produced by Panic keyboardist JoJo Hermann.

The Sam Holt Band formed after its namesake moved to Boulder, Colo. in 2010. "I just wanted to keep playing and doing what I do," says Holt, "so the Sam Holt Band is totally different from Outformation. That band was more collaborative; this is more ... I'm not saying I call every shot, but I write most of the songs, and sing most of the songs. Everybody definitely has input — it's not 'my way or the highway' or anything.

"These guys are so good, man, I'm just lucky to have 'em around."

Not surprisingly, the new group has been embraced by Widespread Panic's legions of fans.

Holt is quick to point out, however, that it's a different animal. "I think it has more of a country feel, country rock," he says. "We have a pedal steel guitar player in the band, and he plays steel probably 60 or 70 percent of the time, and then he plays electric guitar the other amount.

"I think maybe some of the jamming, some of the way I play, can be reminiscent of Mike Houser. It just sort of oozed into me through osmosis, I suppose. And every now and then we'll play one of Mike's tunes that Panic doesn't play any more."

More »
More The Music Column
All Music & Clubs
Comments (1)
Add a comment
Subscribe to this thread:
By Email