Parking up the wrong tree

ONCE AGAIN, it is back to parking.

Parking is always a source of simmering agitas in Savannah, bit it has erupted again into the public spotlight and conversation due to the city’s proposal to charge for spaces at Forsyth Park.

The proposed rate is $1 per hour, 8 a.m. to 8 p.m., Monday through Saturday. Proceeds would pay for improvements in and around the park.

There will be a public meeting and feedback session the day this column hits the web and the street, Tuesday April 24, from 4-7 p.m. at the Civic Center.

There will later be a table set up at Forsyth during SCAD’s Sidewalk Arts Festival on Saturday, April 28 to collect additional comments.

If existing Facebook comments are a good indicator, and I suspect that they are, there is not a lot of support for this move, and a great deal of outrage.

However, it should not come as a surprise to any regular readers that I am in support.

I am a parking sadist. I love to see it destroyed, and to torture those that wish to use it freely. This is because parking has a pernicious effect on urban form. 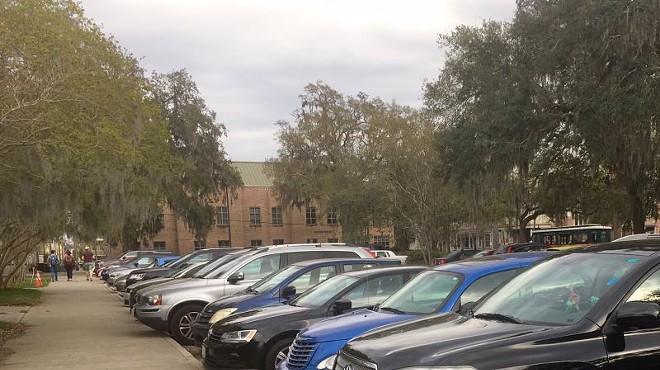 Both John Bennett and myself have previously mentioned in our columns Donald Shoup and his hugely influential book The High Cost of Free Parking (2005).

In its efforts to charge for these spaces, and then put the money into improvements to Forsyth Park, the City seems to be taking a page, or pages, directly from this book.

Skip all the chapters that tell you how and why free parking is bad, and how you and society at large actually pay for it in dozens of ways that you do not perceive, and go to page 601 towards the end.

There, Shoup describes two parking futures. The first is the status quo of Free Parking. The second is a future of Parking Benefit Districts:

“Cities can charge fair-market prices for curb parking, return the resulting revenue to pay for neighborhood public services, and remove the requirements for off-street parking. With this approach, the cost of parking will slowly become unbundled from the prices for everything else. Responding to this change, we will drive less. As a result, we will waste less time in traffic, consume less energy, import less oil, breathe cleaner air, and pay less for everything [housing, people!] except parking. We will also have more revenue to pay for local public services.”

If you think this is all just unrealistic academic theory, Donald Shoup also has a brand-new book coming out called Parking and the City (2018), primarily devoted to examining cases where his ideas have been implemented.

In the case of Forsyth Park, we should treat all of these spaces as curb spaces, even though most are within lots in the park itself. The price that Shoup considers “right” is the lowest price that tends to keep 1 in 8 spaces open, so that basically there is always a space available where you want to go. 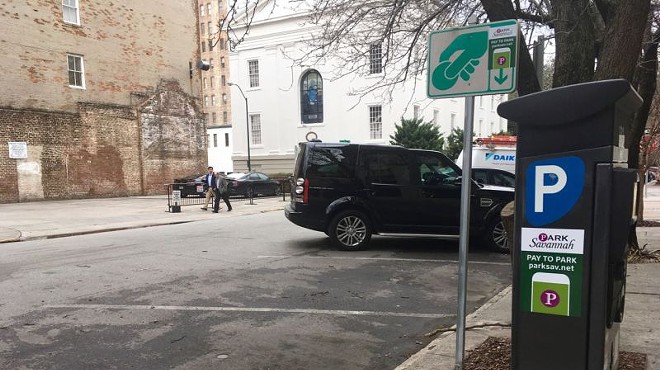 Getting the price right on parking

For the sake of argument, let’s say that the $1 per hour charge achieves this 1 in 8 equilibrium. I walked the area recently and counted the spaces.

That gives a total of 95 spaces (I will leave out the reserved spots). Of these, 12 should always be open if the aforementioned equilibrium is achieved.

Now we are going to dive into a little economics. If you ever took an intro econ class, you probably remember hearing the term “opportunity cost.”

If the City allows these spaces to be occupied for free, when it could alternatively collect over $300k per year - that is an opportunity cost.

Economically speaking, it is just the same as if you allowed Tony Thomas to withdraw $300k from the City’s general fund, put it into a cannon at the top of the Stone Stairs of Death, and blow it into the Savannah River (I create this image because it is amusing, not because I think TT is fiscally irresponsible).

But it doesn’t feel that way, and that is behavioral economics, specifically what is known as “mental accounting.”

Those that are against this fee typically don’t see the loss of revenue as a true loss, because the revenue is not yet in-pocket. But it is a revenue loss just the same – easy money down the drain.

First, there is acquisition utility – the actual value of the thing being purchased. Imagine that you are planning a trip to Forsyth Park, and some of your friends are already there. You plan to drive, but they say that no spaces open anywhere.

However, they’ve found someone else that is getting ready to leave, and they will wait for you to arrive and let you slip into their spot right after, if you pay them $3.

Is this worth the price? Probably yes. You tell the friend to pay the person, and you will pay them back.

But then there is transaction utility – this is the value that a purchaser puts on the deal itself, rather than the good or service being purchased.

If you arrive at the park and slip into that space, while watching other cars circle in frustration, your transactional utility will likely be high. What a great deal you made!

However, if you show up and pass five spaces open spaces on the way to claim the one waiting on you, your transactional utility will plunge. You will now feel ripped off.

An experiment very much like this one is described in Misbehaving: The Making of Behavioral Economics (2015) by Richard Thaler, who just won the 2017 Nobel Prize in Economics.

In it, subjects are asked to imagine being out in the hot sun on a beach. A friend offers to go find a couple beers and bring them back. Subjects are asked what’s the most he or she is willing to pay.

Let’s say the answer is $8. That is the acquisition utility of the beer.

If the friend returns with the beer, and says that it cost the full $8, the subject will be happy if he or she hears that the friend bought it from the bar inside the posh resort down the beach.

But, the subject will be unhappy if he or she hears that the friend bought it at the ratty bodega down the road.

Despite it being the same beer, for the same price, granting the same refreshment - different transaction utilities result from different expectations based on reference prices.

We expect a beer from a fancy resort to cost $8, but not the same beer at the bodega. Again, it’s about the feeling of being ripped off.

And when a reference price for something is zero, and then you have to pay for it, most people are going to feel ripped off, even if the good or the service is very much worth the new price.

My suggestion on that count is not to think of it as paying for parking, but paying for the availability of parking when and where you want it.

Demand is going up. If prices are not charged for in-demand parking, you are going to be circling a lot or parking far from your intended destination.

Finally, here’s another tip from a Nobel Prize winner and colleague of Richard Thaler – Daniel Kahneman (author of Thinking, Fast and Slow and a psychologist that also won the prize in Economics for behavioral work). At a conference on changing behavior he was asked for his best advice on the subject.

Crediting another psychologist, Kurt Lewin (d. 1947), Kahneman said that if you want to change someone’s behavior, it is always better lower barriers to adopting a new beneficial behavior, rather than trying to drive a subject away from the existing behavior (Freakonomics podcast #306).

This route currently loops Forsyth Park, its furthest reach being where much of the parking in question exists. Fellow Thomas Square board member, freelance bookkeeper, and friend Nichelle Stephens observed that this might be where the parking demand is coming from – people catching the dot.

So, maybe we should take this proposed parking revenue, and revenue from future expansions of paid parking, and use it to expand free shuttle service, create stops with more visibility and dignity, and maybe even some remote parking structures. Maybe then we can all get behind a future of Parking Benefit Districts.