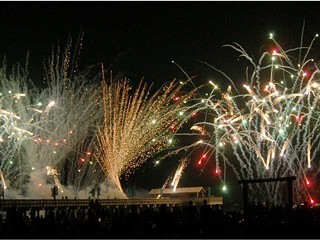 It’s a safe bet that New Year’s Eve 2013 will probably be the most fun Tuesday night of the year (Tuesdays, as a rule, aren’t particularly special).

Here’s a rundown of some of the great things in store for the Savannah area after dark on Dec. 31; of course, there are more DJ dance parties, and more live music, so if you don’t see your favorite holiday haunt in here, we suggest you give them a call to see what they’ve got planned for the Big Night.

Wherever you go, whatever you do, remember to celebrate responsibly – and we’ll see you in the New Year!

"Up the Cup": Woo-hoo! The River Street Savannah organization’s “To-Go Cup Countdown” starts at 8 p.m.; it’s the usual River Street festivities cranked up to a party-sized 11, with Rousakis Plaza music from A Nickel Bag of Funk and Those Cats. The city’s finest fireworks explode over the river at midnight.

On Tybee Island: Of course, wherever on Tybee your celebration takes you, you’ll have a good view of the fireworks they’ll be firing from the pier at midnight – a brilliant display on the ocean’s pitch-black canvas. The Christy Alan Band (with Roy and Martha) are gigging at Fannie’s on the Beach, just near the pier ($15 includes breakfast buffet), and the Tybee Island Social Club (on Butler) has two fantastic bands, Les Racquet and the Accomplices. There’s a party goin’ on at the Tybee American Legion Post, too, with music from the 8-Tracks.

Wild Wing Café: The Stepping Stones and Silicone Sister provide the music for the party inside ($10 cover); at midnight, the “bye-bye 2013” ball drops in City Market (that part’s free). Back inside, party guests get a complimentary breakfast at 1 a.m.

Britannia British Pub: The cool thing about the pub (on Johnny Mercer Boulevard, Wilmington Island) is that they celebrate New Year’s Eve twice – once at 7 p.m. local time, in honor of the U.K., and again at midnight for us Yanks. So that’s a double dose of champagne toasts, with music by the blues band Hitman.

Across the board, it’s party favors and champagne toasts at midnight. And sometimes there’s more! Here’s your live-music and proper-name DJ guide to the music at your favorite club, bar, bistro, et cetera:

The Jinx: Dance party with DJs D-Frost and Cheedoh Dust;