Born in Savannah and raised on the road, the reggae band is at its best 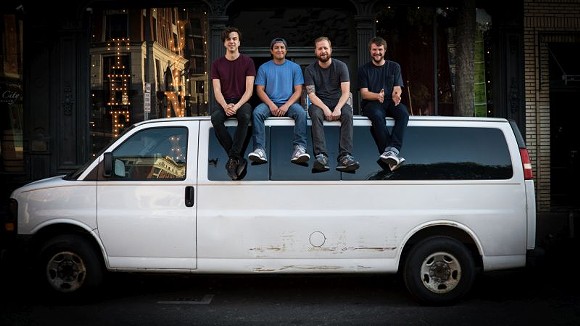 The Passafire guys kick their feet up outside The Jinx.

THEIR TOUR BUS may no longer have Chatham County plates, but Passafire still calls Savannah home.

The reggae troubadours have been creating genre-defying sounds, touring the world, and cutting records that fuse reggae, dub, and alternative rock together since 2003. With the release of their latest album, Longshot, the members of Passafire continue to challenge themselves as writers and performers.

Founded in Savannah by Ted Bowne and Nick Kubley, Passafire’s players are scattered across the U.S. these days—guitarist/vocalist Bowne lives in Saint Petersburg, Florida, drummer Kubley’s in Cincinnati, Ohio, bassist Will Kubley’s in L.A., and keyboard Mike DeGuzman lives in Columbus, Ohio. As college students in a brand-new band, they dreamt of performing on The Jinx stage; 13 years later, they’ll hit it right before they spend August playing amphitheaters with 311.

We caught up with Bowne about Passafire’s mature new sound, writing about what he knows, and his complicated love for the band’s hometown.

I understand you wrote this record in three different places.

We did three sessions. One was here at my home studio and then we have a mobile recording unit...we just take that anywhere. We brought it up to a place way up in the hills in California, did a writing session out there for a while, and another writing session at The Garage [Savannah]. They’re good friends of ours and let us use the studio.

Basically myself or Will or Mike will come in and play with an idea for chord structure. We’ll solidify lyrics and we’ll play around the drum beats for it. We’ll figure out the best feel for it throughout.

These writing sessions started with a batch of songs, the second was adding onto them and kind of going back over all the songs and coming up with a finalized version of demos for them, and we pretty much recorded the whole album at my house first. We’ll usually record it before we go into the studio in Texas so we have a perfect road map and then use their million-dollar gear!

Was there a specific sound you envisioned? There are a lot of atmospheric qualities on this [album].

Being that we are on a predominantly reggae label, we wanted to come to the label with something they could promote through the channels they’ve been building over the years. The only real focus on sound we had was focusing on coming up with a good bit of reggae elements to give the reggae fans and our label, then to create some songs that could potentially cross over into the alternative genre and get play on internet radio and regular radio. We definitely accomplished that. “Growing Up” just got picked up on the Starbucks Spotify playlist!

That song was so funny to me—lyrically, it refuses to grow up, but the sound is mature.

I think it’s showing that we have grown up...the lyrics are anti-growing up, but I guess the music shows you can’t stop it. You can’t stop the evolution of anything, our sound included. That one’s got sort of an afro-pop feel, as well. We’ve toured with bands like our friends here in St. Pete, The Hip Abduction—they’re steadily rising right now—and we just really dug their sound. We already do reggae and we already do incorporate African rhythms and a lot of Latin rhythms. We’ve taken all that stuff and put it into the formula we already had going. “Longshot” has an alternative rhythm to it that gives that exotic pop sound—the Phil Collins, Paul Simon sound.

We can’t deny our roots as rock fans! We grew up undeniably impressed by Nirvana, Green Day, Soundgarden...all these bands that helped form our fascination with playing live music.

A lot of that is dropping the distorted guitars and heavy beats—and another big influence to us, obviously, is 311—we look to those guys for how you mix the straight, heavy kind of funk-based heavy stuff with the soft reggae feel.

Lyrically, this seems pretty heavy on travel and life as a band.

That’s all we know at this point. We’ve been touring relentlessly for about ten years. The lyrics sort of reflect that it’s best to write about wat you know. You shouldn’t write about anything you don’t know...if you write about personal experience, it comes across as more timeless, and timeless and relatability are key to writing good songs.

Any thoughts on playing your hometown?

It’s always good to return. We have friends there we consider family. It’s nostalgic to come back to Savannah and there’s so much I like about it, but there was so much crime and violence before I left— and I hear it’s continued or gotten worse—and I didn’t want to be victim to any of that. I know other musicians there who ended up being victims of violence, and they’re not violent people whatsoever. That scared me.

But it’s crazy, because whenever I really think about Savannah, I think of it as a real quiet, tame little village where not a lot goes on, but when something cool goes on, everyone gets together and goes to it. I also know there’s this other side of Savannah that’s fucked up—‘scuse my French. I really hope for the best for the people of Savannah. A lot of my friends say, “No, I’m not leaving, I love this place.” I hope it’s safe for them to stay.

All that aside, I do like seeing Savannah grow, and I love The Jinx, it’s a staple. We sat on that stage back in the day and said, “Someday we’ll play here!”

I would like Savannah to have some kind of venue comparable to Music Farm or Freebird in Jacksonville. I think there’s a lot of things that have to change politically to allow for something like that. My brother was in real estate there for awhile and several venues came and realized with the laws in place they can’t have all-ages shows. You have 10,000 art school students in Savannah and they can only go see shows their senior year.

This year they actually created a special permit venues can apply for—some places are having 18-and-up shows on occasion or all the time...there’s a new all-ages venue, too.

Yeah, but we play all over the country and literally every type of festival and club. The ones I see that really make the local people happy are literally all-ages, kids, and up. I think there’s potential for that. But then you face noise ordinances and old ways of doing things that people don’t want to change. I want to be positive, I want Savannah to earn up to its full potential. I know people who drive to Music Farm all the time—why do they have to leave? Why can’t Savannah be the next stop instead of Charleston?

How’ve you been liking St. Pete?

I love it. There’s this area with ten bars that all have live music, and I’m just ten minutes from the beach. I’ll pick up my paddleboard, go to any waterway, and see manatees.

Anything you’d like the audience to know for The Jinx show?

We definitely look forward to coming back to Savannah. Come support hometown homies! I don’t think a lot of people there know about us...I just want people who haven’t heard of us to give it a listen and check it out.