Pedestrians are our native species

SAVANNAH’S RELATIONSHIP with tourism is complicated. Lately tension has centered on the ongoing hotel construction boom, as it seems ground is broken on a new property every 48 hours, and the proliferation of short term vacation rentals.

The STVR discussion has been punctuated by tales of the unsavory comportment of some short term vacation renters. In the background, however, there remains room for an older complaint about visitors: We don’t like the way they walk.

The clueless tourist who mindlessly wanders into the street is a popular archetype in the local imagination and a regular target of Facebook rants, comments called into the daily newspaper’s gripe line, grousing in grocery store checkout lines, and grumbling at public meetings. 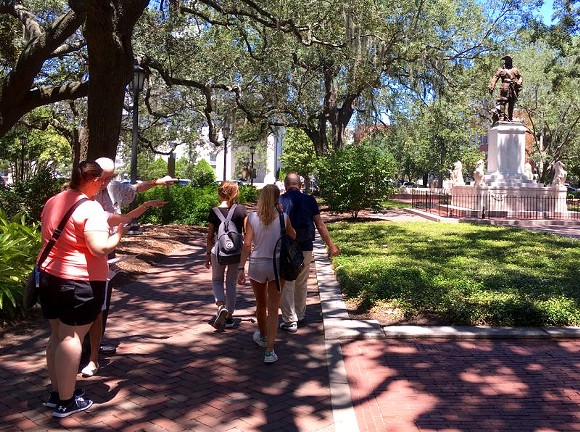 The fact is Savannah is like Disney World to many Americans who spend their lives in increasingly homogenous suburban landscapes. It’s a scenario James Howard Kunstler described in his 1994 book “The Geography of Nowhere,” a cantankerous critique of “America’s evolution from a nation of Main Streets and coherent communities to a land where every place is like no place in particular, where the cities are dead zones and the countryside is a wasteland of cartoon architecture and parking lots.”

If you live in one of these types of places, as millions of Americans do, Savannah is indeed a Magic Kingdom and a Land of Endless Enchantment. Visitors are intoxicated by our city, even if their lips never touch a to-go cup.

In such an environment it’s unreasonable to expect tourists, including Girl Scouts and other varieties of human children, to be on constant alert. No, the onus falls squarely on those of us who drive in Savannah’s historic neighborhoods.

It is we who must exercise increased caution and careful concentration on the task at hand. Even if we have (sadly) become immune to Savannah’s charms, we should recognize many people walking our streets are hopelessly bewitched by our city’s powerful spell.

For more than 20 years I’ve listened skeptically to Savannahians describing constant close calls with wayward walkers, as if pedestrians were dropping out of live oaks or leaping out of azalea bushes, causing them to slam on their brakes again and again.

Here’s a tip: If people are magically appearing in front of our cars as often as some of us claim, we are either driving too fast or not paying enough attention to what’s happening on the other side of our windshields. Or both.

Have I seen people behaving unwisely while they explore our city on foot? Of course. However, I know that when I am driving around Monterey Square, there’s a good chance a visitor will walk backwards into the street as he attempts to frame the Mercer House in his camera’s viewfinder.

When I see a family on a street corner, gathered around a map, I anticipate the possibility that little Tommy will become impatient and scamper over to get a closer look at the nice horsey hitched to a carriage across the street. I adjust my speed accordingly and prepare to stop if necessary.

And when I do slow or stop, I can count on at least one fellow citizen to register disapproval by laying on the horn. The very presence of people walking downtown seems to irk some residents. It’s like driving through the Savannah National Wildlife Refuge and complaining about seeing too many animals.

In our city’s historic core, pedestrians are the native species. Those of us who drive are the invasive creatures and relatively recent arrivals at that. For almost 200 years cars were absent from the city and not until the middle of the last century did they begin to exist in significant numbers in Savannah.

Gen. James Oglethorpe’s city plan, which serves as a model for planners around the world today, was designed for walking.

Attempts to retrofit Savannah to accommodate the speed and storage of private automobiles nearly destroyed the city, or to further the analogy, these misguided measures came close to crashing the delicate historical, social, and cultural ecosystems that make Savannah a place like no other.

Had efforts to modernize Savannah for the motor age been more successful, we wouldn’t have enough tourists to bother complaining about.

Yet the desire to maximize the convenience of drivers, even in the heart of what’s often regarded as one of the most walkable cites in North America, persists both in our attitudes toward the guests strolling our streets and distracts us from the need to create safer conditions for visitors and residents alike.