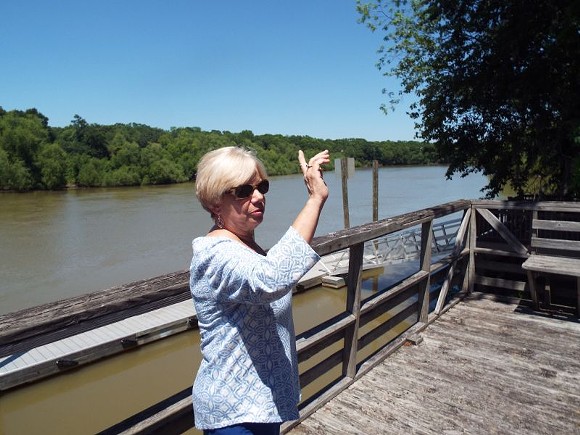 I’M HERE to tell you that the good guys sometimes win.

The bad guys are on a roll right now. But sometimes they lose. Or in this case they back down.

Just how bad was Republic Services’ proposal to dump 10,000 tons of toxic coal ash per day into a landfill near Jesup in the Altamaha River watershed not far from here?

Do I really have to answer that question? Coal ash contains lead, arsenic and mercury. It can leach into the water and waft into the air. And yet, regulators are powerless to stop it.

Peggy Riggins, a retired school teacher who until last year hardly followed politics and certainly wasn’t an activist, didn’t think she was powerless. She wasn’t going to accept it.

“It was just the idea that some company could come into our home and mess it up and we would not be able to do anything about it,” she says of her decision to fight Republic.

“I did not feel like it was true that we could do nothing about it,” she says. So buoyed by a community in shock, she organized the resistance.

Part of this resistance included newspaper publisher Dink NeSmith, whose tiny Press-Sentinel in Jesup showed just why we need “enemies of the people” (what President Trump calls journalists) now more than ever.

“If some smart people who care about this community had not been doing research on this, it would have never been uncovered,” Riggins says of evidence that the landfill already had taken toxic coal ash and leaked it.

The Press-Sentinel published story after story, at times sounding like a broken alarm bell.

For her part, Riggins brought together other “alarm ringers”: biologists, lawyers and PR types. Many of these people donated services worth tens of thousands of dollars.

“Those people just seemed to appear out of nowhere. It’s really almost miraculous,” she says. “Sometimes I just shake my head and go, ‘How did this even happen?’”

How? When people realize that “they can.” They have power. That “environmentalism” isn’t some esoteric urban liberal agenda. That it matters in conservative South Georgia.

As far as I’m concerned, Riggins had all the training she needed to lead the fight against anything terrible: She was alive in the world. And she gave a damn. That’s all it takes.

As to the blow-by-blow of how exactly Republic in April came to revoke its application to haul coal ash in Wayne County, there’s a book in that story, one larger than space here.And Riggins, now ever the cynic, doesn’t believe the story is over. The company hasn’t put anything in writing yet. Its statement on the landfill matter amounts to a short e-mail.

She’s still waiting to see what a more official response will look like. But still, “It gave us a big sigh of relief,” she says of that brief message. She started crying when she read it.

Now by the measuring sticks of the Savannah harbor deepening, the Ogeechee fish kill or the ongoing mess on Cumberland Island, this battle ended with an activist in happy tears.

But I’ll leave you with these thoughts. If not here, then where does this waste go? How do we prevent other places from going through this with maybe a different ending?

Riggins says, strengthen coal ash regulations for one and “develop more energy sources so we don’t have to use coal” for two. Harness the power of the wind and the sun.

Large investors already know that the smart money today is in clean energy. And I have another investment tip for you: Bet on anything Peggy Riggins does next.

And bet on yourself, while you’re at it. You have everything you need.