IT TOOK me almost 10 years, but I finally did it. I’ve been on Twitter since February 2009 and just last month one of my Tweets finally received more than a dozen likes. Here it is:

“Persistent misconception I encounter in my work: The belief that all cycling is elective. People like to rant about “fools” who “choose” to ride on busy streets early in morning/late at night. They never consider people are just trying to get to/from work by only means they have.”

As I write this it’s been liked 62 times and retweeted 16 times.

I suppose the sentiment resonated with people who want streets that are safer for everyone, no matter who they are or how they travel. I’ve written frequently about the “windshield perspective” that many people have when they view our community. 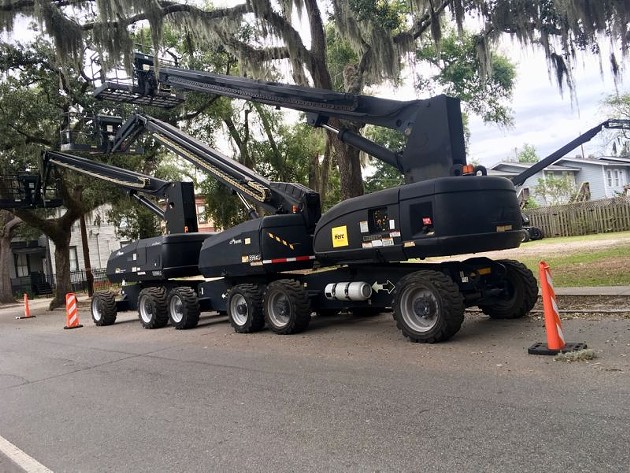 These telescopic boom lifts were placed on Lincoln Street for most of October while a movie was being shot nearby. Yet local residents did not slash their tires or set them on fire to protest the loss, if only temporary, of our most cherished local resource: on-street parking.

It’s not a term I coined, but I think it’s effective in describing our collective inability to understand why others “choose” to put themselves in harm’s way by walking or biking on dangerous streets.

Our mistake is presuming that everyone has a choice, but that’s not the end of our failure to comprehend the realities many of our fellow Savannahians face every day.

First, those of us who are fortunate enough to have the option to drive, may forget that in a significant number of Savannah neighborhoods, the majority of households do not have access to motor vehicles. These are often in lower income neighborhoods where residents must travel long distances to reach their jobs.

People who work in the hospitality, service, warehouse and retail sectors are especially vulnerable to injury or death while commuting on foot or by bike. Why?

Think about where these types of workplaces are typically located. That’s right, they’re situated on busy, multi-lane thoroughfares with high speed traffic.

Not only do the cars and trucks move terribly fast, thus increasing the mortality rate for people who are hit, but streets often lack sidewalks. And crosswalks may be spaced hundreds of yards apart.

It’s also worth noting that people working these jobs are unlikely to have 9-to-5 schedules. Depending on their shifts, they may be walking or biking to and from work before sunrise or late at night, adding to the precarity.

Yet, when reports of crashes that cause serious injuries or death are published, we can depend on the comments section to blame the victims for “choosing” to engage in risky behavior.

Because so many of us travel almost exclusively by car and because so much of the built environment has been configured to make motoring quick and convenient, our perceptions and priorities have been skewed in ways we may not realize.

Take on-street parking, which may be the most highly energized of all local third rails. The fact that we seem to value it above all else, but still fight tooth and nail to avoid paying for it, is perhaps the best example of our cognitive dissonance when it comes to our streets.

A proposed redesign of the Lincoln Street bike lane, which would have increased safety significantly, was ultimately abandoned because it would have necessitated removal of on-street parking near some intersections. The expected backlash, it was feared, would scuttle or at least indefinitely delay implementation of safety improvements.

We probably overestimate the importance of on-street parking because of the sacred status to which we have elevated it, however.

I was pondering this as a trio of telescopic boom lifts occupied half a dozen parking spaces on Lincoln Street for most of October, while a movie was being shot nearby. More production vehicles and equipment were staged in other parking spaces, taking dozens out of service at various times.

Yet there were no riots or marches on City Hall. Everyone seemed to carry on as usual, even when most of the parking spaces on some blocks were inaccessible.

Now, it is possible that residents were compensated for their trouble. I was on the receiving end of such a deal in 1991 when I lived in the Castleberry Hill neighborhood, just south of Downtown Atlanta.

Orion Pictures paid me $50 a day to park several blocks away. It was like manna from heaven and why I will always, despite awful reviews, defend “RoboCop 3” as a cinematic triumph.

Lo, the park-pocalypse did not come to pass during filming on Lincoln Street, suggesting the negligible effect of removing some spaces would have been a small price to pay for a street that would be safer for everyone, those of us who drive included.

Unfortunately, as long as we operate under inaccurate perceptions, we’ll continue prioritize parking and cars over people and community.