Pick up good vibrations at ManiFest 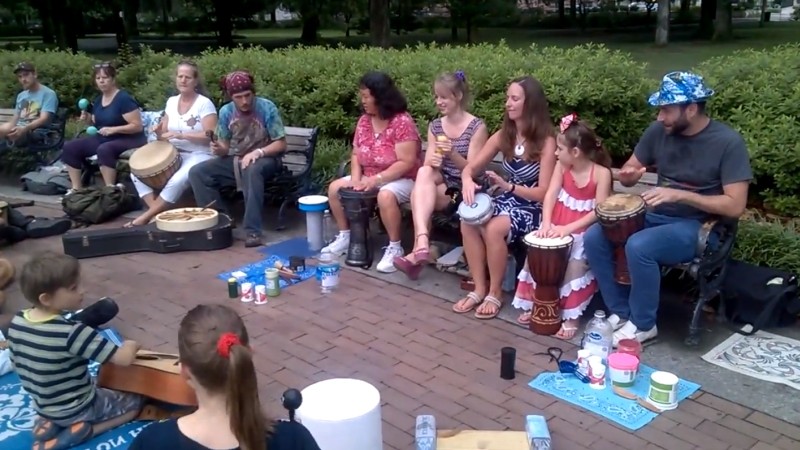 Keeping the beat in the Forsyth Park drum circle; a similar circle will be formed at ManiFest

MATT DUPLESSIE is a believer in the power of sound.

As a musician (currently in his solo project, Clandestiny, formerly of Word of Mouth), he explores the transformative power of positive vibrations and tones; as someone involved in the healing arts, he’s fascinated with sound’s connectivity, remedial abilities, and transformative communal bonds.

In fact, Duplessie says, music and sound’s crucial role in our lives can be traced all the way back to sacred texts, like the Bible.

“‘In the beginning was the word,’” he quotes. “That’s how the whole thing starts. It’s the uni-

verse. I see all these musical sound relations. I even like to quote Nikola Tesla: ‘If you want to find the secrets of the universe, think in terms of energy, frequency and vibration.’”

The Savannah community now has an opportunity to explore the healing power of sound for themselves: ManiFest.

A day-long festival down in Morrell Park, Duplessie says the idea has been years in the making, traced back to his days in Savannah band Word of Mouth.

“We always talked about, ‘wouldn’t it be cool if we had some conscious music festival where people could come and share some of this healing art information, bring that conscious, community vibe?’” he recalls.

“And that’s where the term ‘ManiFest’ came from. After the band broke up, that idea was still in my head.”

After recently spending time in New Mexico for yoga teacher training, he decided to go for it.

Duplessie utilizes an array of tools to create sounds.

“I started reaching out to my friends in the community,” he says. “Every time I would put my probe out there, someone would come back with support. ‘ManiFest’ is perfect, because everything has been manifesting so quickly.”

In Duplessie’s own musical projects, he has always connected with “world sounds and ethnic-type sounds.”

“In my own personal expression, I’m learning more about tapping into my voice,” he explains.

“That’s been the biggest kind of insightful aspect for me, seeing the power of our voices and the words we use—even thoughts, we have in an energetic and vibrational fashion. These are the type of things I want to raise awareness about, to help show, in a way.”

“It’s something that we’ve intrinsically found within ourselves: we love expressing ourselves musically,” Duplessie says.

“I feel like that’s just a key element to being human.”

In his personal studies, Duplessie’s learned to consider everything in terms of energy and vibration—when we think about our words and thoughts, we can get into habits of thinking and saying certain things.

“When we can start learning how to move that energy around in new ways, it starts shifting our perspectives and reality,” he explains.

“Whatever you think about, talk about—you attract those things into your life. We’re bringing in that type of language and ideas, and using music as a vehicle.”

Duplessie hopes that, through the power of sound expression, folks will discover a cathartic and powerful way to find inner healing and peace.

ManiFest offers a variety of forms of expression and connection: Vince Green will lead a storytelling session with handpan drum accompaniment. Olga Khalina and Rick Cody will demonstrate the art of Argentine Tango Dance; shortly after, Larry Cooperman will perform songs on the guzheng, a Chineze plucked zither, and native flute.

Experience connection and community through Duplessie’s Sacred Sound Circle Chants (where voices will unite to create chants from around the world), Anastasia Melchina’s Laughing Yoga Circle, and the Angel Walk.

“I learned the Angel Walk up in Asheville at a three-day singing gathering called Singing Alive,” Duplessie elaborates.

“You get two rows of people lined up facing each other and create a column of space in between. One at a time, you send someone down through this space that we create. They can have their eyes closed, and we’re guiding this person like they’re going through a new birth—it’s a welcome experience into community. We offer praise, compliments, kind words...there are different songs we can sing as a group.”

After the Walk, Duplessie and friends will perform a sound healing and movement concert; the event concludes with a rhythmic interactive drum circle.

ManiFest’s healing isn’t just applied to the folks in attendance—the event’s location in Morrell Park, right on the water, has become a vital element of the festival. Duplessie recently learned that the Savannah River is one of the most polluted rivers in the country. Referencing the ideas of Doctor of Alternative Medicine and researcher Masaru Emoto, Duplessie will kick off ManiFest with a blessing of the water.

“Dr. Emoto would label one vessel of water with negative words or phrases, and another with positive,” Duplessie explains. “Then they would study the water molecules—the ones that have more harmonious words attached had more harmonious geography than the more dissonant, jagged, lower vibrations of the hateful words.”

Using that same principle, Duplessie will use a friend’s crystal singing bowl, adding water from holy rivers around the world, including the Ganges.

Putting positive vibrations into the bowl, Duplessie will pour the water back into the river, with the intention of it spreading through the river and right into the ocean.

Duplessie advises that attendees don’t need any musical or singing history to participate in ManiFest.

“It’s not about being a performer,” he says. “It’s about learning that line between performer and audience, and making it really participatory, interactive, and leading by demonstration.”

He hopes = attendees will have the opportunity to make friends, walk away with newfound inspirations and contacts that they can reach out to if they seek to explore sound healing after ManiFest—whether they’re looking to buy a drum, take singing lessons, or start a yoga regimen.

“Sometimes, it just takes one person to get out on the dance floor to inspire others to just be free and have a good time,” he smiles.