Pie Society aims for the sky 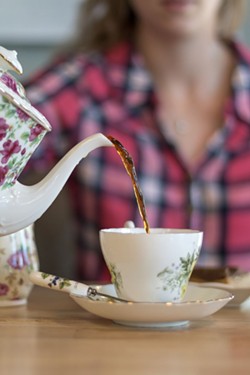 'TRADITIONAL’ is a word that gets thrown around a lot in the food industry. I must say, if I was forced to pick a single term to describe the menu, ambiance, and attitude of Pie Society, I would be remiss to not describe it using that pesky term.

I ain’t talking about saying the blessing while holding hands before a meal, I am talking the type of tradition that makes the food of our ancestors so delicious.

Founded in 2013, Pie Society opened its first location in Pooler, and only a year later opened a second location in the historic district of Savannah. This restaurant and bakery is steeped in tradition and is owned by a family, the Wagstaffs, born and raised in England; they relocated to Georgia to bring Savannah its only authentic British bakery.

Co-owner Gillian Wagstaff, mother to the other co-owners, brought a refrigerator from her home in England and placed it in the store — you cannot miss it behind the counter with a giant flag on the front.

The walls of the Pooler location are adorned with photos as time-honored as the recipes  cooked daily within the confines of the business. Most notable is a blown up picture of the Wagstaff’s family’s shoe shop, in Birmingham, England. Pictured in black and white, you can see their great grandfather, Thomas Sylvester Wagstaff, second to the right. Co-owner Melissa Wagstaff proudly poses in front of the picture.

The Pooler location “is much bigger...and we sell more things such as British groceries and frozen items like English bacon and sausages” says Melissa, setting itself apart from the sister location in City Market. 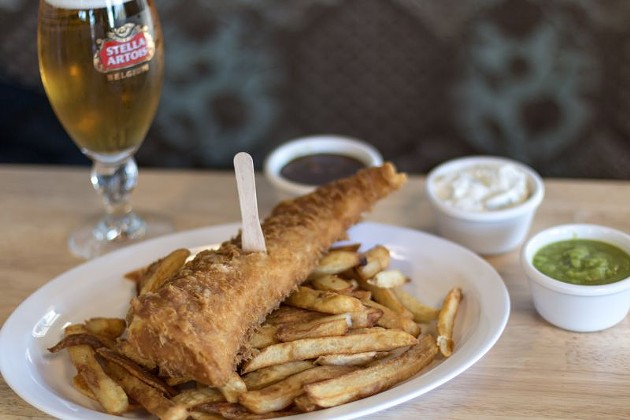 The dish is so authentic, any Englishman would be proud to dub Pie Society a Chip Shop or Chippy, a title given to most fish and chips shops across the pond.

Each plate is cooked to order to ensure optimal flavor and that it arrives at your table piping hot, which only takes about five minutes. With the full portion of fish you get an eight to ten ounce deep fried filet of Alaskan cod that is balanced atop on a mound of thick hand cut “chips,” or fries as we defectors call them here in the States.

According to co-owner Emma Wagstaff, “the fish is fried in beef tallow (fat) in accordance with the traditional British method” to make these fish and chips as proper as the Queen herself.

The tallow is what lends the fish its unique flavor. The cod is meaty yet moist with oversized flakes, and coated in thin crisp batter that makes an audible noise when you tear off a chunk.

The fries that sit beneath are golden brown with a crunchy outer layer, and a pillowy, salty potato inside. At lunch the restaurant offers a half portion of fish that still comes with chips, a sauce of your choice, and a drink.

If you are of the belief that fish and chips must include a cold frothy beverage to wash it down, Pooler’s Pie Society offers several options in beer in wine, including Stella Artois and Newcastle.

As for sauces, the choices of pairings for your fish and chips are limitless considering each accompaniment is as good as the last. The extra creamy tartar sauce, a classic southern pairing for fish, is robustly chunky with bright parsley, sharp shallots, and briney capers.

The second option is preferred by most Brits: fresh mushy peas that are made from lightly blanched garden peas and finished with a touch of mint. It’s sort of a British version of refried beans.

Gravy, a third sauce pairing, is served warm with tiny chunks of steak floating about. This gravy is made using all of the leftover pie gravy from each morning’s bakes, and is hearty like a steak sauce but with a deep flavor of beef.

Lastly, yellow curry is available as an option to dunk your fish and chips in. Again, made from scratch in-house (like most everything on the menu), the curry is studded with caramelized onions and has the ideal amount of spice.

Emma Wagstaff recommends mixing the curry and gravy, her favorite way to eat fish and chips.

To finish your meal, a pastry and some tea is a must considering the head baker and co-owner, Ed Wagstaff, along with his team, begins baking every morning at one am to ensure both stores have the freshest baked goods available. 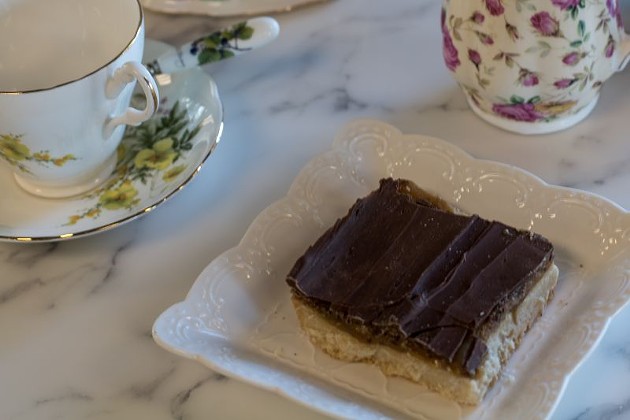 The millionaire shortbread, an upscale take on a Twix candy bar, comes layered with chocolate and caramel resting smoothly a top a base of shortbread.

A true bake of love, the caramel is just thick enough to ensure it does not overpower the slightly bitter chocolate. Each bite finishes with the sandy texture of a textbook shortbread that dissolves in the blink of an eye leaving behind the sapor of butter.

To wash it all down, the Wagstaff’s recommend the PG Tips tea, a tea that can be found in every English home. The drink is reminiscent in flavor of an Earl Grey, but coats your palate in a subtle floral flavor.

I ask Emma her recommendation on how to dress up the tea:

“Absolutely with milk...sugar if you like, but you must first let the tea sit and brew,” she says.

As for the optimal amount of milk is almost a science,but the right amount results in a subtle caramel color.

As the recent winner of Best Savory Taste at Savannah’s Food and Wine Festival, Pie Society will have much more to come in the future considering they beat the competition with a Thanksgiving meal featured in a pie.

Melissa says her family would “like to open another place in Savannah that’s more accessible to locals.”