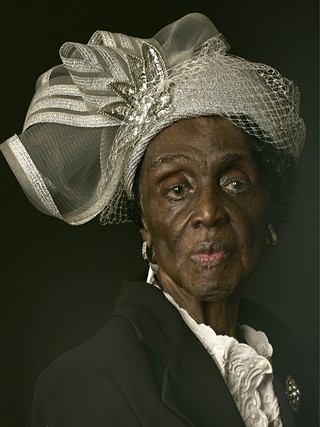 Gonnord's work hangs at the SCAD Museum of Art until January 26.

The timing was impeccable. Within a week of one another, the Nobel Prize announced the recipients of this year's awards, and the SCAD Museum of Art opened the exhibition of French photographer Pierre Gonnord's Portraying the South, a collection of 10 photographs commemorating the 50th anniversary of the death of American author and Nobel Prize winner William Faulkner.

The exhibit is on display until January 26.

As a French artist living and working in Spain, Gonnord photographs marginalized communities that include gypsies, the blind, the homeless and the outcasts of the world. In 2012, he turned his attention to the American South. During his sojourn in the South, Gonnord traveled to Alabama, Mississippi, and Georgia, photographing people and places along the way.

What resulted are 10 photos that capture the people that were born in the South, the vines that grew from its soil and the red bricks made from its clay earth, but something is missing. Faulkner's portrayal of the south was a lifelong endeavor. Gonnord's encounter lasted only 90 days. Although these images were intended to pay homage to the Nobel Laureate and the South, they merely serve as a reminder that three months is not a lifetime, it is only a brief tryst.

It is easy to understand why Gonnord came to the South for his residency. There is an inexplicable draw to this region that is not only embedded in the American psyche but also extends to those curious about history and the places that people call home. What is difficult to understand is whether his anachronistic approach to these images portrays Faulkner's south or the artist's own.

Perhaps Gonnord arrived in search of the old universal truths that Faulkner spoke of, the truths that the South is said to still uphold, "love and honor and pity and pride and compassion and sacrifice." Perhaps Gonnord sought these verities among the ruins of churches or in the eyes of those he photographed but after viewing these images, it is evident that these truths remain hidden from him.

There are three landscapes in this collection from across the region, each projecting sweeping romantic notions of the south. Cumberland is of an oak grove where the permanence of the southern summer can be felt in the stillness of the trees and the coolness of the shadows. Close up, the image is blurry but further away it becomes focused; the impenetrable branches can be seen as a metaphor for the entanglements of time or of a place that time has forgotten.

Capturing haunting memories of an unforgotten history, Old Sheldon is of the Sheldon ruins in Yemassee, South Carolina. In the center of the photograph a single vine hangs from the branches of a roofless brick building as Spanish moss drapes from the boughs beyond the archways of the church, but the photograph is taken too close, and the past is too far away.

In Dickensonia II, rusted balconies rise above a doorway that can no be longer entered; even the brown vines have given up their hold on a house defeated by time and neglect. These three photographs document the south that one expects to encounter; churches destroyed by the fires of war, plantations overrun by disuse, and inaccessible groves of live oaks. But as a whole they remain conventional landscapes that lack reverence.

Perhaps if they had been taken in the gloaming that Faulkner describes so perfectly in his novels, rather than the seemingly obscure times of day that the shutter was released, then these images would truly commemorate one of the greatest literary figures of American history.

Interspersed between the landscapes are portraits and it is evident that this where Gonnord finds strength. While the people that Gonnord photographs may not be the characters that one might find within the pages of Faulkner's novels, they are their own characters on display in larger than life, high-gloss prints with black backgrounds that force the viewer to return each unwavering gaze.

The photographs reflect off of one another, as if each portrait is telling the other of their hard lives hidden behind soft skin. The last photograph on the left is Karl with his brown eyes and wild white beard. With one brow raised his glance is at once playful and penetrating, resistant and acceptant.

Also along the wall is Douglass, who is on the verge of words and the edge of life. Each portrait is a reminder of things that time has not forgotten; the promise of youth, the strength of years and the frailty of time.

Anyone who ventures to the South brings with them preconceived notions of the area and its people. Pierre Gonnord is no exception. To capture the essence of the South is no easy feat and Gonnord should be commended for taking on a task so daunting.

And yet, Portraying the South leads viewers from beyond this region to believe that the South is something that can be experienced in a single photograph, in a single hallway, and in a single day. But for those of us that live in the South, we know that that is not possible.