WHEN THE pandemic cancelled Maria Borowik’s summertime travel plans, which included a trip to attend a friend’s wedding in Europe, she came up with a Plan B.

“I drummed up my very own Tour de Georgia,” she said. “This was not meant to be a revival of the acclaimed professional cycling stage race or an ambitious bicycle ride across Georgia. The premise was to ride my bicycle on as many multi-use paved paths I could find throughout the state in three days.”

Borowik — who works at Hagen Rosskopf/Bike Law Georgia, a Decatur law firm that represents people who are injured in traffic crashes — visited trails in Columbus, Macon, and the Atlanta area for a total of 172 miles of riding over three days. 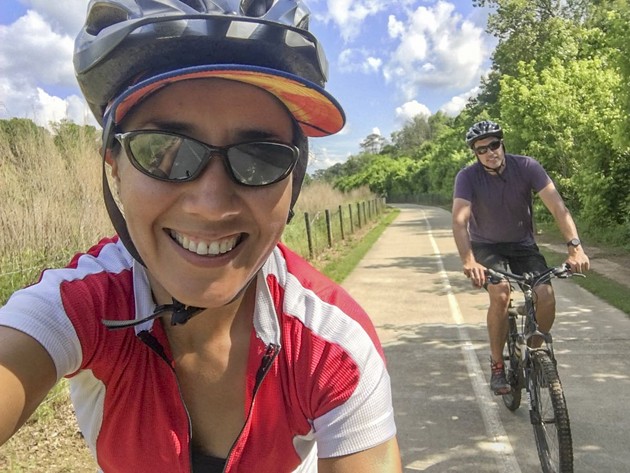 Maria Borowik undertook a tour of Georgia’s trails in a single weekend.

“I’m often reminded of the vision behind The Appalachian Trail. Benton McKaye and Myron Avery expressed concern about the increasingly fast pace of life even in the 1920s,” she said.

“They wanted to create a space where Americans could connect with nature and that was easy to access near towns and cities. I believe that more than ever we live in times where this vision is vital and the trails we have in place are providing space for people to de-stress and find much needed mental repose both in recreational and daily transit use. We need more of them.”

Maria Borowik undertook a tour of Georgia’s trails in a single weekend.

While some may regard trails as purely recreational, Borowik encourages people to think about their potential to provide access to everyday destinations.

“Something that struck me about some of the trails I visited during my trail tour was how they were connected to public transportation or to commercial areas in town. I would imagine what my life would look like if I lived in that specific town,” she said.

“Would the trail allow me to connect my house with my job? Would I be able to ride my bike to a restaurant using the trail? Could I afford to live near the trail?”

Borowik described this as “a mental exercise” that residents should undertake when thinking about trails in their communities.

Brent Buice, the Savannah-based South Carolina and Georgia coordinator for the East Coast Greenway Alliance, said the plan will be useful to the 10 counties and 35 cities within the CRC’s jurisdiction.

“Communities from Savannah to St. Marys can point to this document when applying for grants to fund trail development. Being acknowledged in this planning document will greatly aid local efforts to plan, design and build a continuous paved trail through coastal Georgia.”

Buice explained the potential benefits to Savannah and Chatham County, in particular.

“Bike + Walk Coastal Georgia identifies several such trails envisioned for the region, including Tide to Town, a planned network of 30 plus miles of trails throughout greater Savannah. The northwest portion of Tide to Town will also serve as Savannah’s main segment of the East Coast Greenway.”

The plan underscores the opportunity to expand through links to other parts of the county, describing Tide to Town as “connecting all of Savannah’s neighborhoods, from the heart of the city to its marshes and waterways.

Tide to Town will serve every aldermanic district within the City of Savannah, with the potential to expand to unincorporated Chatham County, Tybee Island, Garden City, Thunderbolt, Bloomingdale, and Port Wentworth, integrating with long distance walking and bicycling trails like the East Coast Greenway.”

Unfortunately, Georgia is dead last in construction of the East Coast Greenway route, which runs from Maine to Key West. But Buice thinks the new plan could help the state catch up to its neighbors.

“I want to publicly thank Russell Oliver, a senior planner at the CRC, for allowing the East Coast Greenway Alliance to collaborate on the Bike + Walk Coastal Georgia plan. I’m confident this new and improved plan will help coastal Georgia move up from last place in greenway development,” he said.