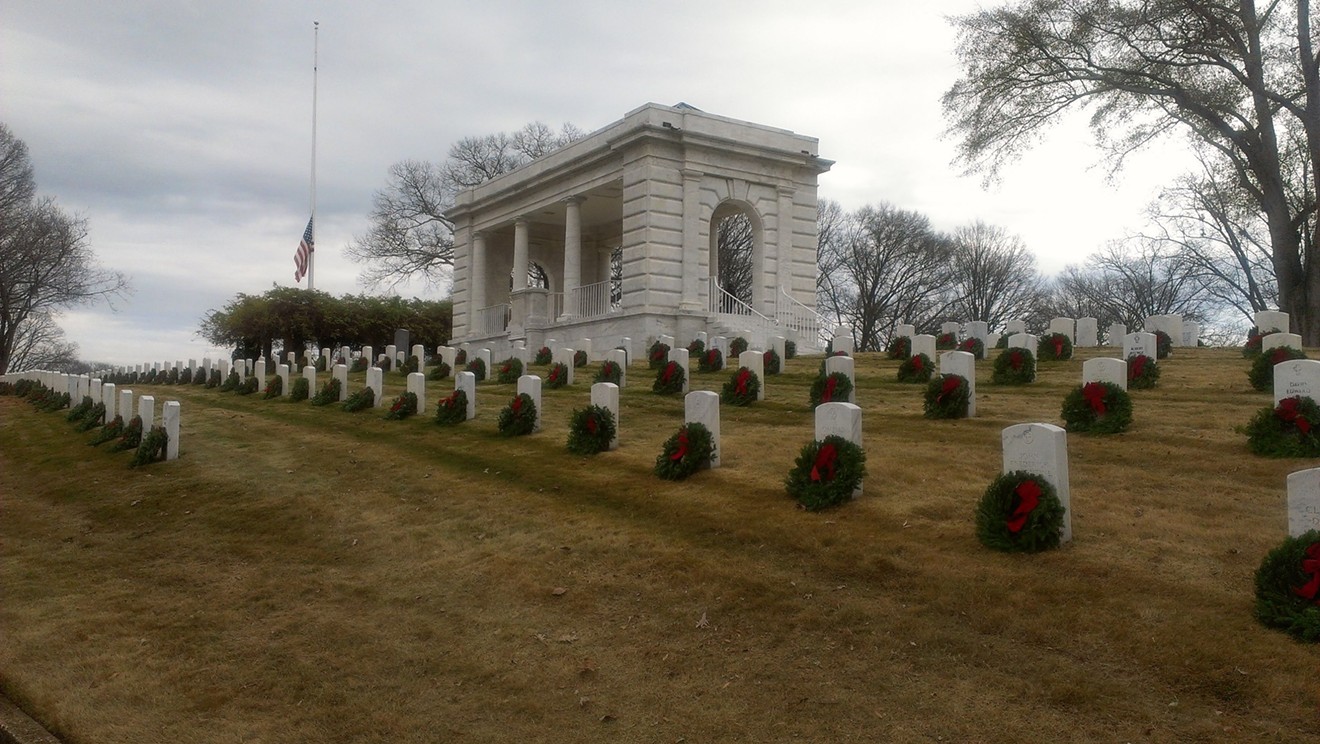 Photo Courtesy of WAA
The American flag and a Prisoner of War/Missing in Action flag wave over the Marietta National Cemetery on a previous year’s Wreaths Across America Day in December.
The gravestones of fallen service members are adorned with wreaths each December, thanks to Wreaths Across America, but the fundraising starts well before that memorable day for veteran-supported organizations across the country. U.S. Air Force Maj. Adam Davidson, commanding officer of the Georgia Wing Headquarters Group 2, Southeast Region-Georgia-119, has been involved with Wreaths Across America for 10 years and said it is a fundraising effort as much as it is a memorial effort. “Wreaths Across America is one of the best fundraisers out there,” Davidson said. “This is just one that teaches our cadets how we honor those that came before us. We have living veterans that need help, but we can’t forget our past.” This year, more than 2,500 cemeteries will participate in National Wreaths Across America Day, including more than 50 in Georgia – Dec. 18. Thousands of local sponsorship groups are working in their communities to raises funds and awareness to honor the local service members with the placement of veterans’ wreaths made of fresh Maine balsam. Throughout the month of July, national nonprofit WAA will be featuring its annual Giving in July campaign — a month dedicated to the groups and individuals giving back in their communities. Davidson explained his unit is the Civilian Auxiliary U.S. Air Force, whose core job is to provide open land search and rescue, and cadet programs and aerospace education. He commands the eight squadrons within the group, complete with 322 members in Northeast Georgia. Davidson’s unit generally sells about 2,000 wreaths, which he said is basically funds the squadron’s utility bills, rent and activities. “On top of that, it teaches our cadets how to honor our veterans,” Davidson said. In December, all cemeteries across the globe which participate in laying wreaths will operate off of eastern time, in line with Arlington Cemetery, the final resting place of over 400,000 service men and women. Since its founding in 2007, WAA has partnered with hundreds of like-minded charities, community programs, and civic groups throughout the country to remember and honor our nation’s veterans and active-duty military all year long. Giving in July celebrates these groups and highlights the opportunity to ‘do good twice’ through the sponsorship of veterans’ wreaths through the organization’s Group Sponsorship Program. “I have long said, it would be disingenuous for us as an organization whose mission is to Remember the fallen, Honor those that serve and their families, and Teach the next generation the value of freedom, if we do not support other like-minded programs doing just that in their communities,” said WAA Executive Director Karen Worcester. Through the program, donations received in fact ‘do good twice’ because WAA gives back $5 of each $15 wreath sponsorship made to support the local group’s own mission, which include programs helping veterans, military families, youth and more, in communities across the country. The wreaths Davidson’s unit receives will be placed on the more than 18,000 graves at Marietta National Cemetery. “They have a [veteran] who was buried there that served in the Revolutionary War, and every war until the War on Terror,” Davidson said. “The big thing that we do is to honor and not to forget. As families grow older and pass on, these graves do not get visited. It’s very humbling to go in there just thinking that certain people have never actually gone to certain parts of the cemetery just because there is no one left of those families, or especially those unknown markers.” The Warriors Walk on Fort Stewart and the Georgia Veterans Memorial Cemetery - Glennville have already surpassed their goals to honor each of their fallen service members on site with a wreath. Every wreath will find its home on a grave this winter, however, as the surplus go to cemeteries which need them. “Our Group Sponsorship Program is a year-round effort, but through Giving in July we hope to remind people that veterans and our current military serve and protect us 365 days a year and it is never too early to make a difference in your own community,” Worcester said. Visit wreathsacrossamerica.org to sponsor a wreath through a local organization or to volunteer to lay them in December for Wreaths Across America Day. To sponsor a link through Davidson’s unit, follow this link, wreathsacrossamerica.org/GA0026P.