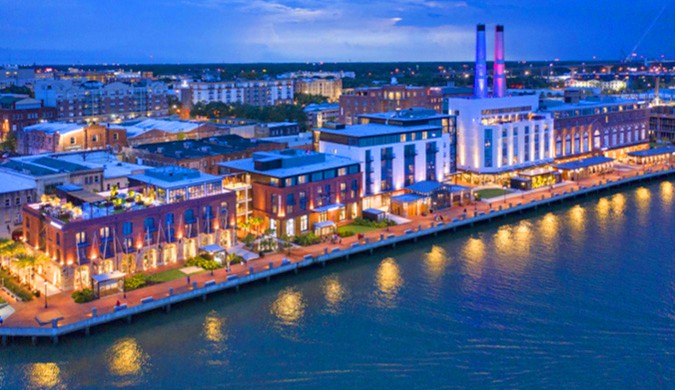 Courtesy of Plant Riverside District
The revitalized Plant Riverside District has received numerous accolades and has even earned Savannah placement on TIME Magazine’s annual list of “World’s Greatest Places.” TIME credits Savannah’s inclusion to the developments along the riverfront which are “transforming underutilized space” and “bringing more of the city’s hidden treasures into view.” Plant Riverside has also been named the 2021 Charter Awards Grand Prize Winner by the Congress for the New Urbanism—an organization whose mission is to “champion walkable urbanism...socially just, economically robust, environmentally resilient, and people-centered places.” The Urban Land Institute has awarded the district the 2021 Americas Awards for Excel-lence, and Savannah’s own Historic Savannah Foundation bestowed Plant Riverside with the 2021 Preservation Award. “I’m proud of each of the awards we’ve received for Plant Riverside District,” says Richard C. Kessler, Chairman & CEO of The Kessler Enterprise, Inc. “It’s truly an honor to be recognized locally, nationally, and internationally for our efforts to transform an abandoned power plant along the Savannah River into a world-class destination for local residents and guests.” Many locals will remember that the west end of River Street was once underwhelming to say the least. The formerly abandoned 1912 power plant, though historically intriguing, consumed 1,100 linear feet of underutilized space along the Savannah River. Kessler set his sights on transforming the area into a space devoted entirely to amusement and intrigue. “Plant Riverside District is truly Sa-vannah’s Entertainment District,” says Kessler. “We emphasize the importance of music, art, and history in all of our lives.” Music lovers especially have cause to celebrate. Savannah has long wanted for new performance venues. Not only does Plant Riverside host live music every day, but it answers the call for a proper concert venue with District Live by Live Nation. The venue will host artists to meet all tastes including the recently announced Molly Hatchet, country artist Kendell Marvel, and reggae group Pas-safire, among many others. “Mr. Kessler created this to be Savannah’s entertainment district,” says Tyler Gray, Plant Riverside’s Director of Entertainment & Programming. “When I met with him the first time, he looked at me and said, ‘Plant Riverside is about three things: beauty, natu-ral sciences, and water.’ The common idea behind these elements is the entertainment they create within us.” Gray has a background in designing entertainment for cruise ships. With 15 food and beverage outlets at Plant Riverside, he approaches the property’s entertainment programming like a cruise ship on land. It’s all about generating attention and excitement for everyone no matter their age or background. “We’re designing entertainment for all visitors,” says Gray. “We’re finding music that appeals to all ages, making this a comfortable environment for everyone, and creating a wow effect that people will always remember and want to come back for more.” So how did Mr. Kessler begin to transform this landmark site into a modern entertain-ment complex without sacrificing its historic integrity? It certainly required patience and a heap of vision. “There were a multitude of surprises along the way, but we dealt with all of them. Plant Riverside District was a particularly challenging preservation project,” says Kessler. “I’m extremely pleased with the end result. It gives me great joy to see children playing in the fountains and to see people enjoying the different restaurants at Plant Riverside District and being wowed by 100 million-year-old amethyst on display.” Plant Riverside is now a symbol of progress comprised of three buildings each with its own personality, dining options for all tastes and budgets, rooftop bars, exceptional nightlife, parks, entertainment programs for children, art galleries, and a built-in natural science museum complete with meteorites thousands of years old from Mr. Kessler’s own private collection. “Savannah is such a special place that has always been close to my heart,” says Kessler. “I want to leave this area better than I found it. I hope Savannah residents and visitors will enjoy Plant Riverside District for many generations to come.” 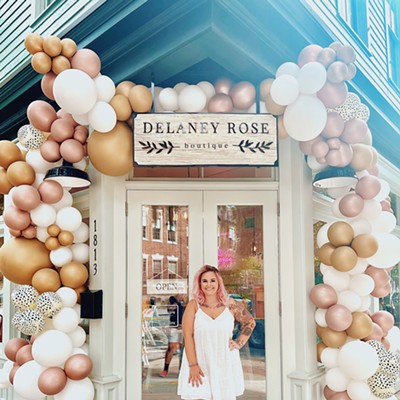 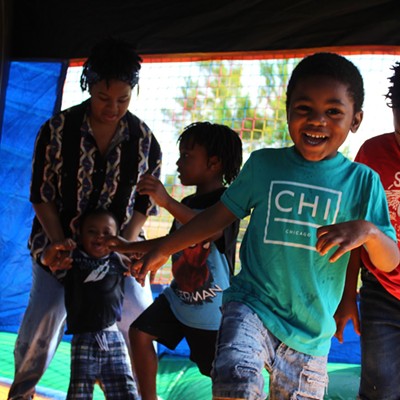