BEER AND BASEBALL have long been linked as a perfect pairing. What could be better than the green of the field, the crack of the bat and good beer in hand on a warm summer’s day at the park?

So linked are beer and baseball that a number of baseball teams use beer in their names, whether through naming rights or a part of local history: Coors Field, Busch Stadium and The Milwaukee Brewers and minor league teams like the Hillsboro (Oregon) Hops. 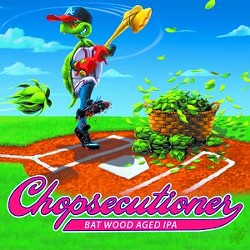 Our local Savannah Bananas offer a large selection of craft beer at Grayson Stadium and just knocked out a double header beer festival a few weeks ago.

When the Atlanta Braves announced they were moving out of Turner Field, their home since 1997, many met the news with trepidation.

One of the marketing moves the Braves made to counter the voices opposed to the move from downtown Atlanta to an area ten miles to the north west of downtown was to play up the food offerings at the new park.

Dubbed the Terrapin Brewpub and ATL Brew Lab is a five-barrel brew house that will serve up Terrapin favorites, brewed onsite, along with some new specialty brews.

Three baseball themed drinks have already been announced. On Deck IPA and Swing Batter Brown Ale are fun sounding beers but standard styles that will be good thirst quenchers while watching the game.

The third beer of the lineup is the interesting one. This beer, appropriately named Chopsecutioner, is a variation on an old favorite.

Terrapin first made a session version of Hopsecutioner, one of its flagship beers. This session beer is then aged on Mizuno bat chips, making it truly part of the game.

No, Terrapin didn’t grind up game-used bats to make these chips; the resin used on the bats wouldn’t make that a good idea. The chips used are the leftovers from the bat making process and are thus clean of resin, sweat and field dirt.

Mizuno’s bats are made from maple so when you try this don’t expect a strong oak flavor found in many barrel aged beers. According to Terrapin, Chopsecutioner has more subtle wood flavors.

Hops are embedded in the name and with a hop bill made up of Warrior, Centennial, Simcoe, Amarillo hops expect a beer with a heavy hop kick.

Though with an ABV of only 5% Chopsecutioner should be a easy beer to drink while watching the game.

The Terrapin Brewpub and ATL Brew Lab is built into the Suntrust Park but faces “The Battery,” the shopping and entertainment center that surrounds Suntrust Park and will be open all year round, not just during the games.