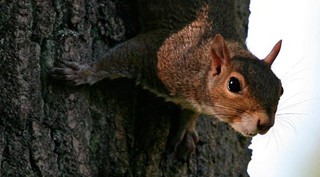 There it goes again, that skreeky garbled chatter.

Two squirrels are noising it up in the water oak in my front yard, bickering over who left the top of the acorn open, or whatever it is squirrels argue over. From the ground it sounds like Charlie Brown’s teacher and her friends downed too many Red Bulls. Since I already have two human children nattering at me, I throw a pinecone into the canopy and watch them scatter.

Usually, I go gaga over Savannah wildlife—I almost crashed my bike yesterday following a massive hawk through Daffin Park—yet I tend towards the apathetic about squirrels. My spirit droops every time I see one of them flattened in the street, but there’s no denying they look like big–eyed, bushy–tailed rats. And rats simply don’t count—there’s the whole bubonic plague thing, plus the fetid little f@#*rs snarfed all the peppers in our garden this summer.

Squirrels fall into the same nebulous category of urban wildlife as pigeons: Cute critters that will eat out of your hand or disease–ridden pests? A wholly unscientific inquiry conducted on Facebook last week revealed that it can go either way, depending on how many of them are breeding in the fiberglass insulation in your attic.

There’s also another role these beguiling rodents can play that many of us haven’t considered, since we are soft and spoiled and like our meat already skinned: Apparently, squirrels make pretty good eatin’.

I wasn’t aware that Georgia’s official squirrel hunting season opened up a month ago, but Dept. of Natural Resources regional supervisor David Mixon assured me that it’s a venerated fall pastime across the state.

“It used to be more popular, and in certain areas it still is,” says the Brunswick–based regional supervisor. “It’s a good way to introduce young people into sport hunting.”

To legally hunt squirrels until the season closes on Feb. 28, you must first obtain a license, use a registered firearm and observe the maximum daily limit of 12 dead ‘uns. Before y’all go around shooting up the neighborhood, please note that discharging a gun anywhere in the city limits will bring a SWAT team down upon you and get you permanently disinvited to block parties. If I need to tell you that hunting squirrels in parks and other public property is a no–no then you may need a short vacation somewhere with straightjackets.

These are the legalities for small game, but Mixon told me that the game warden isn’t going to cause you any issues if you off a squirrel with a BB gun or air rifle in your backyard for eating the birdseed. Though I’m not sure I want to come over for a BBQ anytime soon. Then again, I’ll eat pretty much anything as long as someone else cooks.

Speaking of which: According to Mixon, squirrel does not, as the old adage goes, taste like chicken, but rather has a taste all its own. His recipe? “I wrap it in bacon and bake it. It turns out great.”

Our family has been watching episodes of Man, Woman, Wild on Netflix lately so it’s heartening to know there’s a plentiful food source should our minivan break down on the Truman Parkway and we must survive off the land while waiting for AAA, which in our experience can take upwards of three days. I’m pretty sure my husband can start a fire with a Styrofoam cup and marsh gas.

Please know that I am NOT advocating the death of any squirrels here; I am simply providing information to the subset of the population that has a special revulsion for them. I personally have nothing against squirrels and think fondly back to when my son would only wear a white shirt to Forsyth Park so his furry friend Rico—distinguishable by a notched right ear—could recognize him.

Many of you adore squirrels and find their ubiquitous chatter delightful. You may have even, so help me, touched one. But there is a line:

A few weeks ago, my daughter and I were sitting in front of Brighter Day enjoying some tempeh salad when a couple and their son came out of the store and sat down. The mother cuddled a tiny squirrel while the father shmushed what looked like peanut butter into an eyedropper. We watched with eyebrow–raised interest as the mom, wearing a strapless maxidress, made a nest of paper towels on the ample shelf of her bosom and nestled the animal into her cleavage.

My daughter looked at me in horror. A baby anything is pretty darn cute, but this was getting weird.

Over the next 10 minutes, several people stopped to coo over the mother’s breasts, sharing their squirrel rescue stories while we tried to finish our lunch. A lady came out with her groceries and squealed.

“Oh, wonderful! Have you raised squirrels before?” The family admitted they hadn’t. The lady commenced an informative lesson for the new squirrel parents, explaining that the most important thing was to keep it hydrated. She then relayed that the last squirrel she raised after it fell onto her porch seemed to really enjoy breastmilk.

At this, kombucha sputtered out my nose. “Excuse me, ma’am, but did you just say you BREASTFED A BABY SQUIRREL?”

All of them looked at me. The woman sniffed as the other squirrel mother shifted her chest nest around to protect it from such rudeness.

My daughter exploded into a hacking cough designed to cover up an acute case of the giggles.

The woman turned back to her squirrel–raising proteges and continued her lecture on imprinting, pouring a slosh of her $4 coconut water into their eyedropper.

I could take no more. We tossed our recycling and got on our bikes. I may never be able to hunt a squirrel—no matter how dire the circumstances—now that I cannot shake the image of the lady breastfeeding a baby squirrel.

What’s worse, someone just told me that Hilton Head has squirrels the size of small dogs.