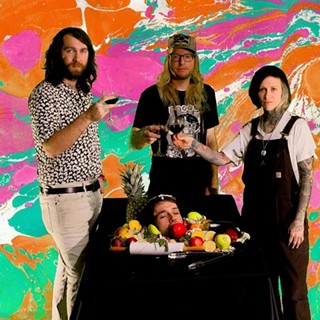 ST. PETERSBURG, Florida, is a place where art seems to flourish. There’s a wealth of visual art and music for a considerably small area, and there are certainly people there doing some great things. Pleasures, the St. Pete-based dark groove band, is no exception. The band, currently touring with Atlanta buzz band CHEW and set for an El Rocko Lounge gig on May 23, has an extremely unique sound and an engaging live show to match.

We spoke to keyboard player Riley Morgan before the band’s local stop.

When did the band get together?

Morgan: I’m a relatively new addition to the band, but it actually was born out of a previous project that our singer Katherine and our bass player Morgan were in called Sons of Hippies. That project kind of imploded, but they had a tour booked after the band broke up. They kind of threw Pleasures together. They wanted to do something new and had been planning it in the background, but then that band fell apart so they just changed the name and went right back out on the road with a new band.

So they’ve been touring pretty religiously since the band’s inception in 2016.

You can definitely hear all of these influences coming through like Hiatus Kaiyote and Unknown Mortal Orchestra, mixed with the kind of psychedelic groove thing. How exactly did you guys land on what it is you do?

Morgan: Everyone has really different influences, and I think it’s more of the combined effect of each person adding a little spice. I think the Hiatus Kaiyote sounding stuff is probably Roger’s crazy drumming. He loves all that type of stuff. Katherine is super influenced by, like, The Knife and weird electronic stuff.

The songwriting is super democratic. Everyone adds a little something and we kind of change it and evolve it as we go. I don’t think it’s ever really intentional.

Do you guys usually get together with the intention of writing?

Morgan: Definitely. Pretty much every song you’ve heard is something that happens from an idea. Someone brings an idea, and will bring it to the table. Then we’ll start trying to structure it out to see if we can come up with something interesting from there.

For you as a synth player, do you let the song dictate parts and patches? Or do you have reference points in mind usually?

Morgan: Yeah, it’s really interesting creating synth tones. I usually just let the song dictate it. I’m actually pretty new to the process, so it’s pretty fun and engaging because it’s completely new and open to me. The song will be taking shape and I’ll end up kind of working with a tone that isn’t quite right yet. I’ll be thinking about where I want to take it, and then go back to the drawing board and reshape it towards the sound I hear in my head.

As far as touring goes, has there been a show since you joined the band that stands out in terms of the overall experience?

Morgan: That’s a good question. We had a really cool one recently at home, where we kind of did something different. We normally have this aesthetic of really psychedelic, crazy colors and a light show. It’s a really over-the-top, sensational rainbow thing.

For this recent show we said, “Let’s do sort of an anti-Pleasures thing.” We played only dark songs and made all the video components all black and white negative-filtered. We cut certain songs that we’d normally play, and it was really well-received and fun. It was really fun to take our own dynamic and flip it, and everyone really responded to it.