After the loss of its co-founder, Spitfire Poetry returns from hiatus newly energized. 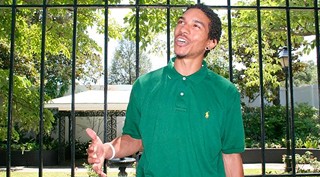 "This will be the rebirth of Spitfire through this performance," says Marquis Williams. "After this one, it's only going to get bigger and better."

After the untimely passing of Spitfire Poetry co–founder Clinton Powell in January, many questions about the future of the organization remained.

For years, Spitfire had been a hub for poets and artists in the community, and its open mic sessions and poetry slams were nearly as beloved as the man who helped organize them. But with many of the organization’s elders now living in other cities, what would happen to the group without Powell’s direction?

The answer appeared as suddenly as the fliers advertising the return of Spitfire for a poetry slam and open mic at Muse Arts Warehouse on Saturday, July 30. The young man who took the organization’s mantle was Marquice Williams, a former mentee of Powell’s.

“After Clinton passed, everything kind of died down, but this will be the rebirth of Spitfire through this performance,” says Williams. “After this one, it’s only going to get bigger and better.”

The 20-year-old has big shoes to fill, but he’s accepted the responsibility of carrying on the legacy he’s inherited.

“I’m just hoping to live up to the expectations that everyone has for me, and for Clinton’s dream, because that’s what it’s about, making sure that lives on,” he says. “Spitfire was really like the only one doing poetry slams in Savannah, so I want to make sure we keep the tradition and keep the spirit going.”

The open mics were a place where young talent got a taste of performing in front of a crowd, and where more experienced poets got to test new material or experiment with style before a slam. They were also a rare opportunity for many to share openly of themselves in an accepting environment; a chance to vent joy, frustration, confusion, anger and anything else on their plate.

While its weekly and monthly events were perhaps the most visible, Spitfire’s footprint in the community is much larger, including the annual Spoken Word Festival and poetry programs run in the school system.

Williams had started working in the school program in November, just a few months before Powell passed away. He taught workshops for kids at Southwest and Myers middle schools last year, and will expand the offerings this year.

“I understand what Clinton was trying to do because when we show the kids that they have a voice and they can say what’s on their mind freely you can see a different aura around them,” says Williams. “Just to see the smiles on the kids’ faces inspires me to keep doing what I’m doing.”

After spending several months dealing with the grief he felt, Williams has chosen to dedicate himself to pursuing and promoting poetry and the arts.

“After Clinton passed, I had to sit down and think about what I wanted in my life. I just wrote. I kept writing. Within a week, I’d written 15 poems,” Williams says. “The last poem was empowerment. I found who I was. I’m comfortable now.”

For the first few months, while Williams settles into his new role, the slam and open mic will share time (the difference between the two is that the slam is competitive and poets are judged; whereas the open mic is just about sharing), until they are each ready to stand on their own again. For Saturday’s event, the open mic (open to all types of performers) will precede the slam.

“I’m trying to do everything with Clinton’s best interest in it. More than anything I’m trying to stay humble,” says Williams. “It’s not about me. It’s about the arts. It’s about spoken word.”