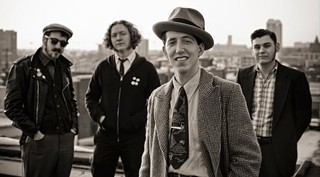 Can you guess which one is Pokey LaFarge? Yep, that's him in front.

Ships of the Sea Museum, 41 MLK. Tickets $12 at savannahfolk.org

A presentation of Savannah Stopover

“As far back as I can remember,” he says over the phone from his home in St. Louis, “I was being exposed to early American history, but not so much the music. Civil War and World War II history. My grandfather was kind of an amateur historian, and we hung out with the grandparents a lot as kids.

“I always had an eye and an ear directed towards the past. So when I heard the old blues music at 13, that was really it. That early blues. That was the living, breathing thing I was looking for. The history was speaking to me. It was like the past was speaking to me. I kind of instantly became an amateur scholar of the music.”

The sort of kid who devoured the writings of John Steinbeck and Jack Kerouac, Pokey was already writing songs that spoke in a different language, as if they’d been written by spirits long gone. “So words and music were falling through my head at a young age,” he says.

When he heard Bill Monroe, at 16, he traded his granddad’s guitar for a mandolin and began to find his voice as a performer.

And yes, it made him stand out.

“That music’s 100 years old, but in a lot of ways it’s always been a rejection towards pop music. I enjoy some pop music from back in the ‘20s. I love Tin Pan Alley songs, and Irving Berlin, Gershwin and Hoagy Carmichael and the like. But at the heart of this, it’s revolutionary music, man.”

LaFarge does not think of himself as a revivalist – although there are a few covers in the set, he writes most of the tunes that he and his band of multi–instrumentalists play. And unlike many roots musicians who are content to recycle the same stuff until they drop, he has plans to augment his sound. Big plans.

“I like early dance orchestras and some Big Band music, you know, but it starts to get too square,” LaFarge explains.

“Not square like in a ‘hip’ and ‘square’ way, but where they’re squaring off the tunes. Where it’s all so damn predictable. It lost its rawness in a lot of those Big Bands.

“That’s why I like Western Swing so much, because it’s a mixture of all these different genres. It’s kind of the most conducive genre for me to play and get away with. I’d like to have some piano on there, some horns, definitely some lap steel – kind of a mixture of a lot of different instruments would help me progress this sound I’m trying to create.”

It’s always a pleasure to welcome Savannah native Andrew Terrett back to town. You know him as Tubby Love, a reggae/rocking singer/songwriter of considerable talent and charm. He’s at Live Wire Friday with Dopapod, and Sunday he'll be part of the Savannah Songwriters Series (6 p.m. at Cha Bella on Broad Street).