Local couple chronicles life and times of one of Savannah’s, and the nation’s, most interesting heroes 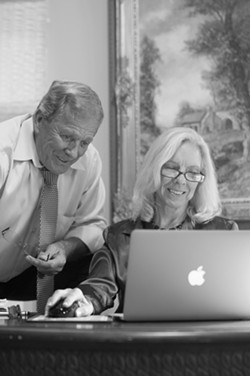 Mel and Joan Gordon at work.
By J.R. Roseberry

HIS NAME is ubiquitous. Virtually every one of our states has a county, city, street, park, school, bridge or monument named Pulaski. Savannah even sports a fort with his moniker.

But most folks--even those living in the towns bearing his name—know little about Casimir Pulaski. Here's a guy who sailed to America from his native Poland to help in our fight for freedom.

Nowadays he'd be referred to as an illegal immigrant but it was his action that may be responsible for our very existence.

He saved George Washington's life at the Battle of Brandywine and created the first American cavalry, a vital mounted force which played a key role early in the Revolutionary War.

Without Washington's leadership and the new fighting strategies introduced by Pulaski, our militia would likely have been defeated early on by the superior British forces.

Mel and Joan Gordon, who reside on Wilmington Island, have spent the last four years visiting battlefields, prisons and musty museum and church archives across Europe and the U.S. ferreting out information about this diminutive hero in hopes of introducing him to a new generation and bringing him the recognition he so richly deserves.

It's appropriate that the two, who have just published a historical novel, Pulaski: The Forgotten Hero, based on their research are residents of Savannah since it was in this city that the gallant Gen. Pulaski died fighting for our freedom at the age of 34.

Their research has revealed numerous little known facts about the man, at least one of which most Polish people are reluctant to talk about.

This hero of battles for freedom in Europe and America, who may be the only man to serve as a general in wars for two different countries, was born with a hormonal anomaly which often prompted parents of that era to abandon such children at birth.

The Gordons, however, believe this syndrome, which leads to a blending of female and male characteristics may well be responsible for Pulaski's amazing success on the battlefield and in seemingly contradictory areas such as clothing design, showmanship and emotional empathy for others.

They provide the facts and secrets they discovered while following in his footsteps across two continents in their book. It's a tale of political intrigue, battles for freedom and poignant love affairs, sprinkled with famous world leaders of that time. The fast paced tale describes events as they may have occurred in Pulaski's short life.

The Gordons will be present for a book signing for the first edition of their novel between 7-10 a.m. Monday, Oct. 9, as part of the commemorative service honoring Gen. Pulaski at the Siege of Savannah Battlefield near the Savannah History Museum. (Their initial introduction of the book was held at a Polish observance in Brooklyn, NY on Sept. 30.)

During their research in Europe, they spent an extended time living in historic villas in France, a country with which they became enamored, Joan perhaps more than Mel. She says she hopes to persuade him to move to that country permanently.

Joan left her home in Morehead, a small town in the Appalachian mountains of Kentucky, to attend Georgia State University, where she received her MBA degree with a 4.0 G.P.A.

She was employed in the financial services industry in several central European countries following the fall of the Berlin Wall and was later responsible for awarding government grants to non-profit housing organizations in the U.S. Following her retirement she wrote a weekly column about animals for a newspaper in north Georgia.

Mel, a native of Ludowici, Ga., attended the University of Georgia on a voice scholarship before performing as a singer, actor and model in New York. Between off-Broadway acting gigs he made ends meet serving as a chauffeur for the Rockefellers.

After plying him with a couple of glasses of wine you may be able to prompt him to talk about his formerly close connection with that family via one of the daughters. (Their relationship faded fast when she found Ludowici left something to be desired. Nuff said.)

Mel headed for Hollywood when he was tapped for a role in the movies but was sidetracked by the draft during the Vietnam War. Following military service he became a successful real estate developer and broker in California and later in the mountains around Cashiers, N.C. and coastal south Georgia. More recently, he briefly operated a hotel on Tybee Island, where he has been active in community theater.

The two now live and write in their home beside the Wilmington River, though France is beckoning. Prior to a permanent departure however, the Gordons plan to travel extensively visiting many of those Pulaski namesake sites throughout the country lecturing on history and promoting their book. In addition to a second edition, they are planning an audio version featuring different speaker/actors for each character.