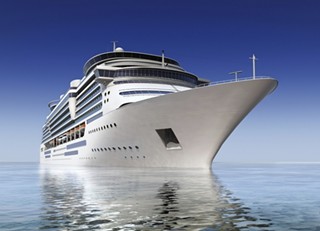 Rendering of a beautiful cruise ship that will never, ever dock in Savannah

So. A cruise ship terminal in Savannah ... is not going to happen.

On June 27, City Council unanimously voted to deny the Phase II study of a cruise ship terminal on the Savannah River Landing site. That'll be the end of that for a while, maybe even longer.

The City Council meeting was filled to the brim with citizens, all of whom seemed to oppose the cruise terminal. Some were allowed time to speak and subsequently denounce the idea.

Dr. Ken Sapp of SCORE and the Downtown Neighborhood Association questioned information the City Council paid nearly $200,000 for, calling it "invalid and incomplete."

Pam Miller, of Be Smart Savannah, a cruise terminal opposition group, pointed out that tiny Savannah would have little clout among heavyweight cruise companies if they ever wanted to pull out of an agreement with us.

Moreover, she said, "there'd be no boost to local businesses and any jobs created would be low-paying and seasonal."

That was the gist of the 12 or so people who spoke, including downtown residents and business owners. No one spoke in favor of the terminal.

Councilman Tom Bordeaux went furthest against the terminal, calling the whole concept "a dumb idea from the start." But most people echoed the sentiment that cruising from Savannah was right to be explored, was looked into, the people spoke and now it's done.

Most every Council member thanked Alderman Tony Thomas, a vocal backer of the terminal, for his diligent work and follow-through. However, even Thomas had to admit that after examining the facts of the most recent study that the cruise terminal "is not the best idea for Savannah," and ended up voting against it.

He also noted that if the same kind of deep inquiry was done with the Hutchinson Island racetrack, "things could have turned out differently over there."

That portion of the meeting ended with Mayor Edna Jackson summing it up: "We had to look into this for the sake of job creation, tourism, for another way people could experience the city. It came about ... to help the local economy in tough times."

The Council profusely thanked citizens for their input, and all reveled, albeit briefly, in a moment where government actually worked correctly and didn't ramrod an issue through.

ANOTHER, somewhat shocking, undertone also emerged from this discussion, however.

According to her, a rail system to Tybee is being explored by the Metropolitan Planning Commission.

Bordeaux called for "new ideas" and "out-of-the-box" thinking to make Savannah a better place and create jobs. Councilman Van Johnson even said the concept of "casinos on Hutchinson Island" is being looked into and Savannah needs "innovative ideas" to stay relevant.

Maybe on the face of it, having a few cruise ships come through Savannah sounded good: Boatloads of people with wads of cash turned loose on the city with insatiable appetites for public drinking, candy and T-shirts. Some of our local leadership obviously regarded this kind of tourism as an economic boon.

And, maybe it would have been, if not for all the negative external costs, including the projected $100 million terminal price tag, cruise ship pollution and the heavy pressure on an aging downtown infrastructure.

But should we have really looked into cruise ships at all? We could have asked Charleston about economic idealism and promises of cruise ship money. They spent a lot of money for a cruise ship terminal... and now they hate it. Charleston's Historic District is currently on the World Monuments Fund list of most endangered cultural sites. That sounds like killing the tourism golden goose, degradation of history aside.

However, it still seems like something does need to be done with the dormant Savannah River Landing site. The vacancy is costing local taxpayers almost $2 million a year in bond servicing — money that was supposed to come from sales and property tax revenue on SRL developments.

Despite the cheerleading of local officials to continue with the SRL project in 2009, especially guided by the rosy economic predictions of county staff, the economy remained stagnant and SRL developers bailed.

Whoops. No construction, no tax revenue and no motivation to start fixing up President Street as promised.

Possibly, what our local government needs is some creativity, and maybe even a little out-of-the-box thinking when it comes to the SRL site. They said as much in the June 27 council meeting. Verbatim.

Ideally, Savannah would like to be a regional, national and global destination — because of our rich history and pretty architecture, sure, but also for our culture, people, and our own unique song. A cruise ship terminal was an "iffy" idea for many reasons, but most poignant, maybe, was that it was a spirit killer. It just wasn't "Savannah." It didn't feel right.

If the city wants to develop the SRL land, 54 acres right on the Savannah river, let's really seize the opportunity and seek out a spirit enhancer – something that benefits local quality of life, bolsters tourism and solidifies Savannah as a world-class destination.

Now, as our community considers what to put on the SRL site, let's really explore our options.