Preaching the gospel of America

Granted, there’s a considerable gap between the Good Book and the Rat Pack, but Clay Johnson has been able to bridge it with ease and grace. Johnson, who preaches at Parkway Church of Christ, is also the lead singer of the Equinox Jazz Orchestra, Savannah’s professional purveyors of big band, and swing, and Sinatra–style ring–a–ding.

These, the 35–year–old Johnson believes, are his twin callings (well, if you ask his wife Kayla, they’re two of his three callings).

The 20–member ensemble’s sixth annual Independence Day concert, Savannah Swings, takes place Monday at the Savannah Theatre. A portion of the proceeds will go to benefit the next phase of Savannah’s WWII monument on River Street.

Johnson’s longtime best buddy is Jeremy Davis, the saxophonist who put Equinox together in 2005. They both hail from West Monroe, La. “We met in the 7th grade,” Johnson laughs. “Our moms made us be friends, and study and do projects together and all that kind of stuff. Neither one of us were crazy about it.”

Ah, but they were both horn players (Johnson is also an accomplished trombonist), and they bonded over music, eventually playing together in school bands and in a funk/rock group. At Louisiana Tech, they were both accepted into the Jazz Band and performed at the New Orleans Jazz & Heritage Festival.

At this early stage, however, Johnson wasn’t entirely sure what he wanted. “In college, I couldn’t decide,” he says. “I had five different majors. It was pathetic – engineering, architecture, all that stuff, until I realized that I sucked at math. So I had to do something different.”

He studied literature and English, vaguely thinking he might become a teacher. Finally, he recalls, “They gave me a general studies degree, put a cap on me and sent me on my way.”

Along with the band work he was doing with Davis, Johnson – the son of a preacher – paid his way through school by sermonizing in Louisiana, Arkansas and Oklahoma. “I was going around to all these country churches and preaching, but I was also playing this funk music and doing the whole jazz scene,” he says.

Music had always played an important role in his life. His grandfather had been a member of the Stamps–Baxter Quartet, a famous touring gospel group. Both his mother and father were gospel singers, too, and often brought little Clay onstage during performances.

In 1997, an acquaintance invited Johnson to spend a summer in the Savannah area, holding revivals and youth rallies, and preaching in local churches. Eventually he and Kayla began spending a year at a stretch in the city.

This is when Jeremy Davis re–enters the picture. During one of those summers, both old friends and their wives stayed in town, and enjoyed themselves so much that Davis began talking about moving to Savannah.

“That boy had never lived more than 30 miles out of his hometown in his whole life,” Johnson remembers. “I told him ‘I promise you, if you ever move to Georgia, I’ll move to Georgia. That’s how sure I am you’ll never do it.’”

Davis, of course, promptly packed up and moved.

It took a few years, but the Johnsons, with their two kids in tow, finally followed their friends to the Hostess City. It was 2008, and Davis’ bold experiment – creating a classic–looking and –sounding big band, playing songs from the Great American Songbook and blending them with fresh arrangements, was paying off.

“Everything he touches turns to gold,” Johnson marvels. “He came out here and put the orchestra together right away, got it going and started impressing everybody.

“He would call me to come and sing, and when I was here, some of the church members I knew would come and see me and say ‘Come and preach for us when you’re in town.’ One thing led to another.”

Savannah Swings includes the stuff that Equinox has made its name on – classic swing tunes, jazz and R&B, with Johnson sharing vocal duties with Adam Jones (and, on a few select numbers, Huxsie Scott). This particular show puts a special emphasis on patriotic songs, too.

Davis and Johnson work it all out with arranger Hoppy Hallman. “Our basic mission is to take these old, beautiful songs – some of the greatest songs that were ever written – and have Hoppy arrange them in a still–classic style,” Davis says. “But fresh and hip so it doesn’t sound dated. And that’s difficult to do.”

Although he’s poised and confident in his onstage role as the finger–snapping crooner, Johnson admits he arrived a little late to the party when it came to classic Americana.

“I did not grow up learning this stuff,” he says. “It was southern gospel, country and western, that was it for me.

“Jeremy asked me to learn ‘Luck Be a Lady,’ but I’d never heard it before. I got it and it really grew on me, so I started buying Sinatra albums, or just downloading them, and started getting all this Sinatra wealth, and Dean Martin wealth, and Tony Bennett wealth. 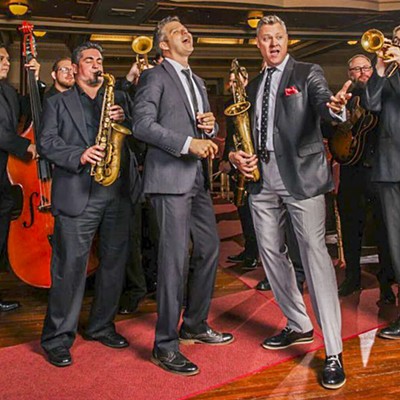