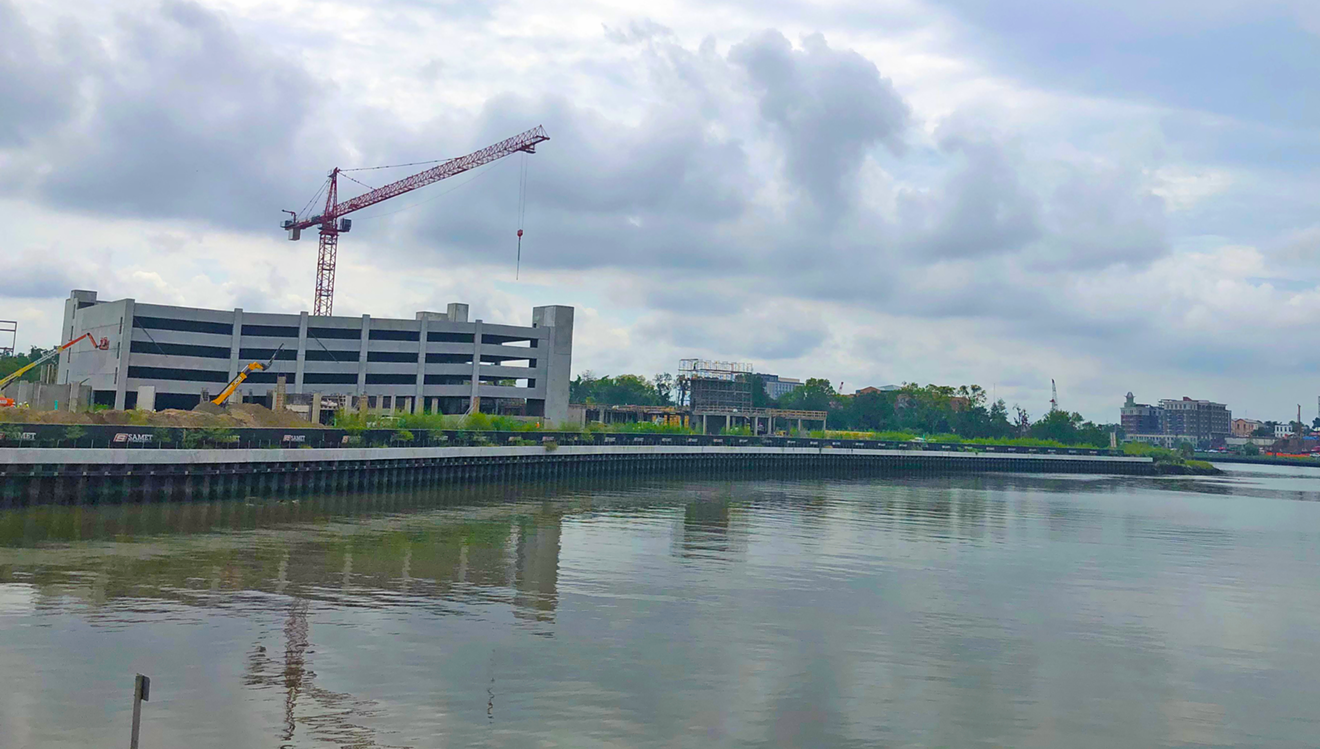 The adaptive re-use of the old. The development of the new. It’s all right here, with some million dollar muck in the middle. And here I am, more than happy to to dig it up for ya. 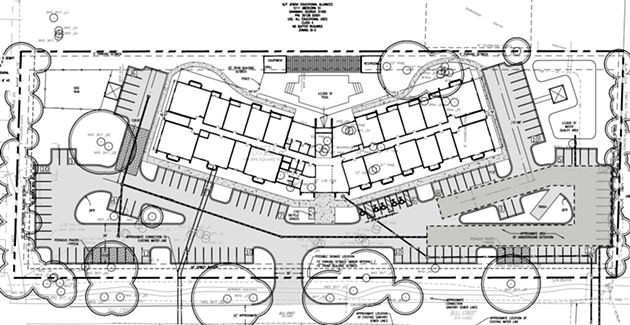 The plan by Coleman & Company shows the proposed layout of the apartment building.

A general development plan has been submitted for a 4-story, 93-unit apartment building behind the Jewish Educational Alliance building, commonly known as the JEA.

Atlanta-based RPM Living submitted the plan last month for the site, which is bounded by Bull Street on the west, the JEA building along Abercorn Street on the east, and 67th Street on the north, with DeRenne Avenue near the south side. The north side along 67th Street is lined with single-family homes.

RPM Living Development Manager Dave Lemco, who submitted the application, declined to comment when reached by email on Aug. 25. And JEA CEO Adam Solender did not respond to an email sent Aug. 25. 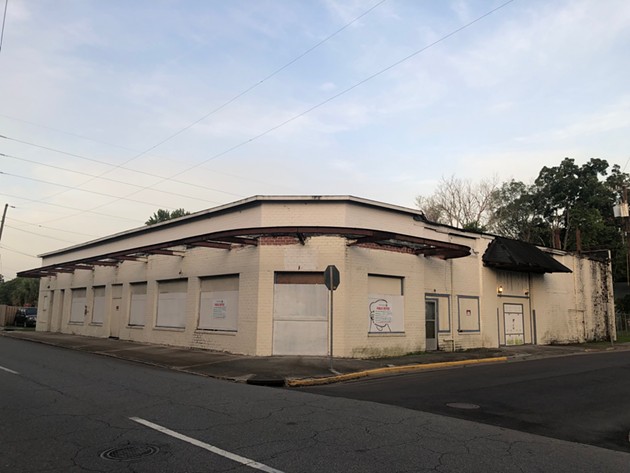 While dead people are the basis of the business, dead vehicles could kill it. To protect ten converted hearses from the wicked elements, the owner of Hearse Ghost Tours is planning on resurrecting the vacant building at 1501 East Broad St. as a parking garage for the Savannah tour company’s vehicles, as approved by the Savannah City Council last week.

The building now sits vacant and boarded up, but will be renovated as part of the plan, as submitted by the tour company’s co-owner, Carol Higgins. The project will provide an an alternative parking option to the outdoor lot across the street that the tour company currently uses. That outdoor lot will in turn be used for employee parking. 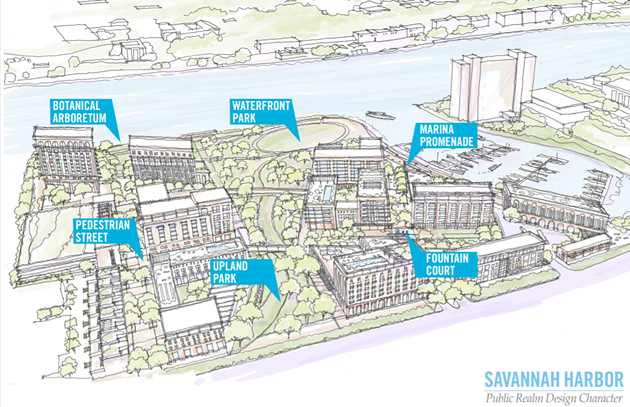 The Chatham Co. Commission is expected to approve dredging to accommodate a marina being developed as part of a $400 million mixed-use community on Hutchinson

The amount of sales-tax revenue available for a $3.36 million dredging contract won’t cover the cost of the voter-approved project, which will accommodate a marina being developed as part of a $400 million mixed-use community on Hutchinson Island.

The dredging of the slip, east of the Westin, will accommodate the marina planned for the under-construction Savannah Harbor parcel 5 development. The 27-acre site along the Savannah River and east of Slip 1 is where Savannah Harbor Partners is developing housing, retail and lodging, along with a public waterfront park, medical complex and marina. While the marina will be developed by private entities, Chatham has committed to removinag the soil materials within the slip area to a depth that allows use by boats. The work covered by the proposed contract includes the removal of accumulated sediment and native soils by hydraulic dredging and off-site disposal. 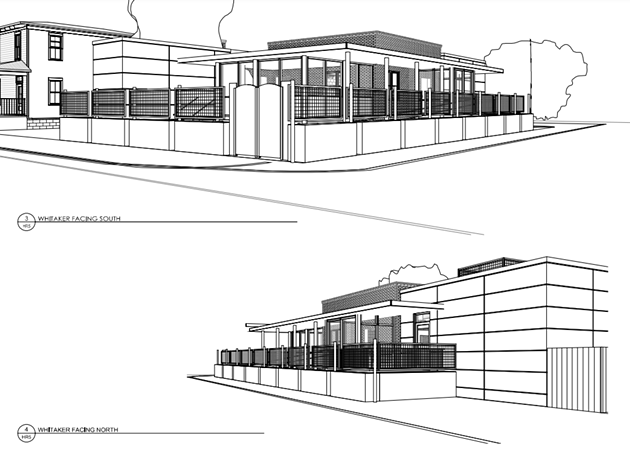 The owner of the Victory North event venue and two nearby restaurants is planning on adding to his growing portfolio of businesses in Savannah’s Streetcar Historic District in the area known as the Starland District.

Mohamed Eldibany is planning to rehabilitate the historic building at 15 W. 43rd St., across Whitaker Street from Victory North, for use as a restaurant, according to an application and associated documents submitted for the project.

The red brick building was originally built between 1936 and 1940 and operated as a cold storage “icehouse”, but has been vacant for 30 years, according to the project’s architect, Kevin Rose of Savannah-based Rose Architects. The proposed rehab will preserve the existing structure, while adding a kitchen addition on the south side, along with a small entrance vestibule onto the existing stoop on the west side. In addition, a small restroom addition will be added to the easternmost corner of the north facade, along with a glass indoor/outdoor seating area.

The rehab project was approved, with some conditions, by the Historic Preservation Commission last month.

The restaurant would be the third developed by Eldibany, who also owns The Garage at Victory North restaurant next to the concert venue. He also restored the historic Victorian house at 9 W. 43rd St. to house Troupial Cafe. the area between Randolph Street and the Bilbo Canal downtown.

Long-dormant, the planned Riverview development may one day mirror the newly developed Eastern Wharf mixed-use community across President Street, with hotels, apartments, shops, restaurants and roof-top bars. First things first though. Some zoning changes had to be made.

Located between Randolph Street and the Bilbo Canal on one of the most heavily trafficked corridors into downtown Savannah, the property just east of General McIntosh Boulevard is on an almost 20-acre former industrial site that has sat vacant for years, with remnants of dilapidated warehouses sitting amidst overgrown vegetation.

While city staffers agreed that the current industrial zoning classification is inconsistent with the growing development pattern in the area, Riverview’s zoning request was recommended for denial since it would lack some of the standards that control development downtown. Instead, staff recommended, and the city council approved, D-C (Downtown Commercial) as an alternative zoning classification, with restrictions, which allows similar uses while providing better protection against potentially negative impacts.

The approved D-C zoning and conditions require that a general master plan be approved by the Metropolitan Planning Commission prior to the adoption of the zoning change. In addition, buildings would be limited to five stories or 50 feet in height when they are located within 100 feet of property lines of existing residential or institutional uses.

A drawing of the potential development submitted with rezoning request indicates a grocery store may be on tap for the east end of the site.