Matreyek’s silhouette adds a human touch to her high-tech process.

PERHAPS THE most exciting element of PULSE is the opportunity to step into and interact with artists' worlds. Helming the incredible showcase of talent is animator, video artist, and performing artist Miwa Matreyek, whose work is taking "interactive" to a whole new level.

Matreyek projects storybook-like moving images into her performance space, stepping into the work herself. Her shadow moves among starry skies, cityscapes, and oceans.

Fans of TED may have seen her stellar TedGlobal 2010 performance, Miwa Matreyek: Glorious visions in animation and performance, an ambitious piece that’s a wonderful example of Matreyek’s interdisciplinary style.

Under the soothing element of whimsy, there is a deep exploration of self-discovery, of finding one’s place in a swiftly-changing world. That line from poet Mary Oliver’s famous “Wild Geese” comes to mind: “...over and over announcing your place/in the family of things.”

At PULSE, Matreyek will present two of her best-known performances: Myth and Infrastructure and This World Made Itself. She spoke with us about her process and making her unique worlds come alive.

CS: I understand you have a background in collage. What first interested you in implementing that kind of layering into video?

MM: In undergrad, I was just a general art major, taking classes in photography, drawing, painting, sculpture. Collage became a way that I could combine what I was doing in various mediums and assembling them together, along with found images, textures. I was originally working a lot with cutting up things, pasting them, Xeroxing the image to create a flat image...very zine-like process. I started making collages in the computer and that soon became animation, as I could move the components of the collage images to music I was recording on a four-track.

I started grad school at Calarts (Experimental Animation program) thinking I would just make a bunch of short animations and get out, but being in an environment where film, theater, music, dance, fine art, writing, etc., etc., are all under the same roof, I started to meet people from other backgrounds and thinking about how stories can be told outside of the standard screen or monitor—that lead me into my first collaboration with a theater student, Chi-wang Yang, from my first year, combining animation and performance

The next year Anna “Oxygen” Huff joined us and we started making short perforce works as a group, later we became Cloud Eye Control. This then informed me to explore bringing my work also in to performance, in my own way. 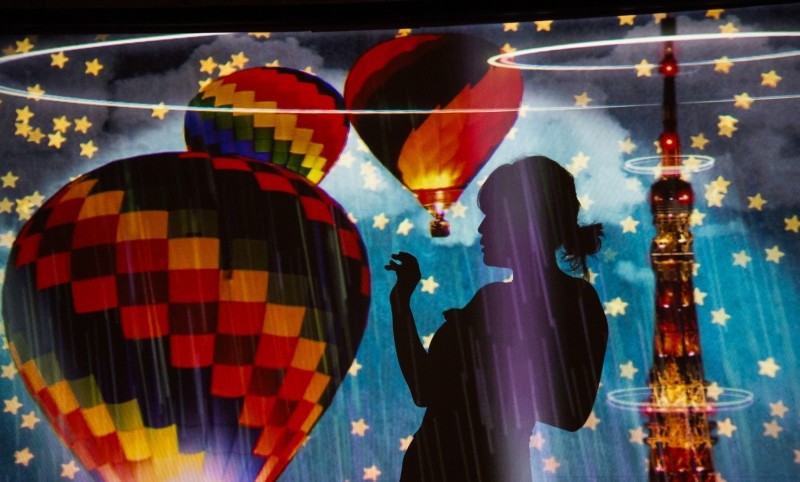 Catching fire: Matreyek interacts directly with her animations via projection.

Your work has a storybook-fantastical quality to it. Where do you look for inspiration?

Inspiration comes from many different places. I think the look you mention comes just from my own aesthetic for composition. Sometimes if I track back the origin of an inspiration, I’d remember that it was from a dream—an image or a feeling I was trying to reproduce. Sometimes it’s really just the things I find around the house—like an apple, a cup, a plate, and ways that I can use them playfully in my work.

What is your process like? Do you storyboard, or do preliminary sketches, or is more like a script?

I tend to make things pretty intuitively. Often I do start with sketching down of ideas, or thinking about visual moments. Often, there is a physical gesture or a movement I want to create with my body, then I try to think of how to visually or technically execute that. Sometimes, I start with a technical puzzle for an illusion, trial-and-error through carious test to find a good way to create this trick, then think of which visual moment/physical movement I can compose around that.

I don’t really storyboard...I tend to just start making compositions (visual with my body in mind) and scenes, then start to piece them together into a flow.

I tend to take a lot of photos and video in the process of figuring out the piece moment to moment (I use the projectors and screen throughout the process of making the work, so I can physically test out the images) so that helps me keep track of what I’m creating as I go that I can piece together.

How does the use of animation and technology allow you to expand your reach and vision as an artist? How do you maintain that human element?

The human element is definitely the live body. A piece visually very similar to mine can be made just with pre-made green screened silhouettes...but what the audience sees would be a completely different experience.

Having the real body, and seeing me as a real person who can sometimes flawlessly fit in to the animation, and at other times clearly struggle to do so (like my muscles quivering to hold a pose) is part of the experience that gives a visceral immediacy to my work. I really enjoy that with the work that I do, I can create a sense of the body becoming a little bit fantastical in the context of animation (a little bit weightless, magical) and the animation can seem a little bit more real and tangible.

Speaking of Telfair Academy Of Arts And Sciences