PULSE's Mark Dixon: 'There's a serious lack of control in this stuff'

He tinkers with sound contraptions as you watch

As a founding member of the ad hoc performance art ensemble Invisible, "sound thinker" Mark Dixon invents and builds as he performs.

Generally, Dixon and Invisible's work involves crafting a pre-conceived "artstrument" live onstage while you watch. Then they play it, and you listen to whatever sounds happen to come out of that contraption.

Usually, they sound great. And even when they don't, it's still pretty awesome.

Famous Invisible bits include wooden chairs which double as marimbas, and the "Selectric Piano," in which the classic IBM office appliance — which conveniently has the same number of keys as a piano — is repurposed as a fully functional musical instrument.

At this year's PULSE, Dixon brings a two-pronged performance: creating a drum machine/turntable of sorts ("Rhythm 1001") using only analog/mechanical technology, and "Elsewhere's Roof," which incorporates and amplifies the totally random sounds of dripping water. 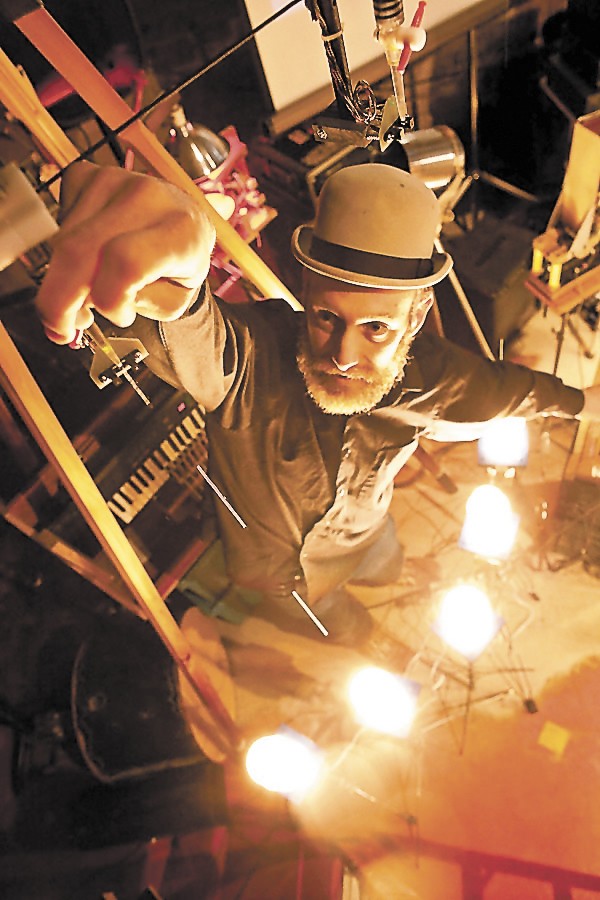 Sounds like the building of the project onstage is as important as playing it at the end.

Mark Dixon: It's very process oriented. The difference between what I do and what a band or other music ensemble does is I'm asking questions about what would it sound like if, for example, the tracks of a drum machine didn't know each other, don't have repetition. The performance then becomes more about the audience being able to listen than it is about me performing something exactly as intended. There's a serious lack of control in a lot of this stuff (laughs). I'm sort of an audience member myself. There's a stereotype of artists that make machines, and the stereotype is the machine doesn't work! It's like, uh-oh, the thing is crapped out for the day, and the artist flies back over and fixes it. But my devices tend to work. On the other level though, there is a lack of control that I love and embrace. I'm a devotee of John Cage's thinking about these things. I have to challenge myself. I have to be a good listener and a good player, in the sense of the word "play."

You're not bringing the Selectric piano to town?

Sounds like you have a bit in common with jazz musicians, the improvisational aspects.

Mark Dixon: It's quite a bit a stretch to say it's like jazz, but essentially for this show we'll have a template, but there also has to be a lot of spontaneity and improvisation. We want it to count that we're flesh. It's about transparency. See, we have this device in the world called a drum machine. If you told a little kid, "I'm gonna take you to see a drum machine," their face would fall. It's a little plastic box with buttons and a few LEDs. My drum machine is in the vein of people who understood their TV as a box full of tiny little actors. My drum machine is my explanation of what's going on inside that little box. I'm not against digital technology, but what I miss is that little box. Digital can't draw me in the way the physical, mechanical, kinetic stiff draws me in.

I'm guessing you must be totally down with the whole vinyl renaissance.

Mark Dixon: I still can get misty at the idea you can take sound, which is so intangible, and make it into a texture. And then by dragging it across another texture you can make sound. It's a lot easier to have an app on your phone, but when I come your way, it needs to be with 150 pounds and be accident-prone (laughs).