With Niche, Savannah boys Justin Dick and Michael Redmond move their music down the road 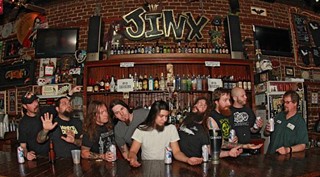 That's Justin Dick in the center, with Michael Redmond on his left, and Scott Johansen on his right. The others are the Savannah musicians, technicians and other cool people who contributed to the Niche album "So Be It."

What happens when punks grow up? Ask Justin Dick, who wrote 10 years' worth of brutally aggressive songs, with angsty lyrics about blackness, alienation and despair, reflecting pretty much the way he felt every day of his 20s.

“I’m trying to steer away from the word maturity,” says Dick, 31. “It sits well with me, but I’m definitely not in a place where I feel like I know everything.”

Dick wrote the songs, sang and played guitar in the post–hardcore band Two Days of Freedom, alongside Mike Redmond, his bass–playing best friend going all the way back to Calvary Baptist Day School.

“Not being the cool kid at school can breed some angst and anger,” laughs Redmond “We were definitely not the most popular kids at school.”

Two Days of Freedom was born out of the musicians’ love (and empathy) for the pained pummeling of Kurt Cobain and Nirvana; they also related to the rugged stance taken by such scenic stalwarts as Black Flag and Dead Kennedys. “‘I feel like this, and I’m not the only one who feels like this’ - that’s what I was trying to convey at that point,” Dick says.

“Now I want  to express when I’m happy, when I’m sad, or if I just feel like there’s something that needs to be said. But do it in a way that can grab more people.”

He’s not focusing everything inward any longer.

“Music is always cathartic, but that was me at a more volatile time in my life,” Dick adds. “I realize now that I don’t have to focus on this one aspect of my life, because I’m honestly not that person any more.”

“We played that for almost a decade in two different bands,” says Redmond. “But I think we got all that out of us. It’s still underlying, because that’s where we came from, and that’s how we used to write.”

But their new band, Niche, creates music with more of a structure. There’s emphasis on melody and lyrics now, as opposed to simply creating an atmosphere.

“We’re so close, that change was kind of natural for both of us,” Redmond explains. “It wasn’t really a conscious effort to try to be a different band, or to make a different kind of music. It was a pretty organic thing.”

Dick is even more direct. “I’m a lot more sure of myself,” he says, “and I feel a lot more comfortable in my own skin.”

Although Two Days of Freedom put out an EP and a 7-inch split with another local band, Dick figures they were probably doomed right from the beginning. “Unfortunately, we were all young in that band and we were all partying pretty heavy,” Dick laughs. “Not too much else got done. So the ambition was there, but the focus wasn’t quite there yet.”

This time around, he wanted the band to be “something different. I was tired of all the fast and screamy music, and I wanted to get back to stuff I grew up listening to, stuff that my dad drove into me, like the Who and Zeppelin.

“And to me, some of the earlier punk bands like Television and X, they still have this good rock ‘n’ roll sound but with a little more of an edge on it.”

Niche’s drummer is Scott Johansen (Futbol Bats, Flaming Yawn, Mass Plastic), and the three of them – joined by guest organist Corey Barhorst of Kylesa – will perform Friday at the Jinx. The Train Wrecks share the bill.

Niche is debuting its first CD, So Be It, engineered by Chris Adams of Dead Yet! at Elevated Basement.

“I feel it’s a lot more broad in spectrum, as far as emotion,” Dick continues. “Because we still do some harder, edgier stuff but it’s blended with a lot cleaner melodies ... as far as emotion goes, it’s not all from this one source of desperation or loss. Now, I feel a lot more grounded as a person.”

While the ghosts of punks can be heard rattling around in the floorboards of So Be It, the moody, progressive sound is sometimes reminiscent of Rush, or the (live) Who, with the bass, guitar and drums playing separately – yet somehow together – to create a fascinating electric tapestry. It’s metal, it’s punk, it’s even southern rock. It all flows together extremely well.

“The bands that I’ve always really liked a lot are power trios, like the Who and Nirvana,” Dick says. “Bands I found myself listening to all the time. The Jimi Hendrix Experience. And even when he did Band of Gypsys it was that initial three–piece.

“We want the live show to be a little more raw, but still sound full. Me and Mike have been doing it for years now, and we’re still progressively getting better.”

Dick prefers the power trio approach, and doubts that Niche will add a second guitarist – or a permanent keys player – any time soon.

“It keeps you on your toes a whole lot more,” he says. “It makes me personally focus on the music more – if a melody can stand on its own without all the extra instrumentation then I know it’s going to be a pretty decent song.”

And Redmond – not surprisingly – totally agrees with his lifelong friend. “To me, it’s almost a creative tool,” he says. “It forces you to do things a four– or five–piece band wouldn’t do.

“The biggest plus of being a three–piece is that we really have to bring more to the table, so we sound bigger than we are.”

With the Train Wrecks