GREG RETTIG is the manager—or Lieutenant— of Cup to Cup Café, which operates as both a coffee roaster and a café. With restaurant demand completely halted, Cup to Cup is now selling local food items to help those partners out as well as drive a little revenue.

This is Greg’s Quarantine Chronicle.


How are you doing? How’s everything with you? I’m good. Life is normal-ish. We had to change and adapt to still do anything. One of the biggest changes we did notice was noting a lot of our friends’ businesses closing. We snatched up a bunch of local grocery items and, since we can’t have seating, turned out back room into a pantry so we could have a mild grocery. Normally, our café is so tiny that I can’t keep anything. But with the back room closed, I can just fill it with stuff.

That was our first thought: the grocery stores are going to be in panic, and we can absolutely control this space down to the point where it’s one person in, one person out, and almost no interaction. Which, there is the craziness: when I’m there for eight or nine hours and my interactions with people are fleeting at best, when normally I have two to three people sitting at the bar talking to me. It’s very different. It’s a very social business with no social aspect anymore.

Routine is very important, I think. It’s so silly to think that, “Oh, no one needs to go get a coffee,” but if you’re still trying to work and do your daily routine. I’ve worked from home before, and it ended up being wildly unproductive. When your work desk is next to your bed and the fridge, you just give up. I learned I have to have complete separation of space or I’ll never get anything done. So, routine—if you don’t get up, get ready, act like the day is happening.

One of my main regulars is a city employee, and obviously they’re not working in the office right now, but he still gets up every morning and is there first thing when I open at 7 a.m. to get his coffee. And he says that doing that is the only way to lock into step getting the work done.


It must be such a relief for them to be able to come get their coffee.

Or the idea that they still could. The business patterns are very different. I have a couple people that still do their normal thing, but most of them don’t, and that’s okay. They still interact with us online, and they still have the chance to come pick up. Maybe they would normally have me make their coffee every day, but now they’re at home and they’re buying bulk coffee, so they can make it themselves at home. But the idea is, we’re still there. I guess it’s mildly comforting in the aspect that some normalcy still exists.

For us, a major part of the business is supplying restaurants and other cafes. As the coffee roaster, we supply a lot of places, and almost all of them are completely closed, so business is very different.

There are two different entities: there’s the coffee roasters and the café, and we operate them independently. Right now, the roaster is almost completely shut. We’re basically making for the café and selling what’s there, but we’re not doing our big wholesale accounts. That is making an interesting time.

Another social change for us is normally, I’m in restaurants and bars all the time, taking them things, setting up, that kind of stuff. Now there’s no restaurants and bars to go to. I get to go to mine, and that’s it, and it’s only because I’ve turned it into a small grocery store.


Is the business doing okay without the roasters?

We’re very, very small and we have very little overhead. Right now, everything that runs under the café is fine. The things that run under the roaster is a difficult path. We have applied, like everyone else, for payroll protection [via] the small business loan. Since we’re so small and the overhead is so small, if we get those things in place, then our payroll would be covered and the business would feel rather normal because our main expense is covered.


Have you heard back from them?


I think it’s hard for people to understand why some businesses remain open, and that it’s essential, especially for very small businesses, to keep going and make some sort of revenue.

Because of that wholesale model, we always ran everything very economically. It’s as minimal as possible. The numbers we do are surprising to some people for how much we actually move.

Beyond that, our friends like Mitla Tortilla and Geechie Boy Grits, we were like, “I have a little store. Let me buy some of your stuff upfront and we’ll sell it.” We were doing really well before his, so we had some surpluses, so we used those to help our friends. And almost everyone who’s bought from us, it’s the first time buying those products.

The food supply chain is really interesting. There are a lot of small companies that just supply restaurants and grocery stores. At the [Forsyth] Farmers’ Market, there’s a farm that had a really great growing season, so he had pretty good weather, and now he can’t unload his crop because he supplies restaurants. Like many of the farmers in America, he’s doing his best, and what doesn’t get sold just gets thrown out.

In modern society, another thing is our supply chain for the grocery stores was never meant to operate without restaurants. It’s an insane disproportionate figure for how much we eat not from a grocery store. So that’s why there’s all this massive waste and everything. 80% of a lot of food supply goes to commercial outlets, not your grocery store direct outlets, but restaurants and conveniences and those kind of things.


How else is life going for you?

Even though I do a lot of social things, I’m not a super outgoing person. There are very few times I’m out not on the clock in some way, either playing music or supplying or courting a new account or something like that. I’m not just going to the bar to hang out at the bar, even though most of my friends are bartenders.

To that end, me and my roommate have started doing this online Facebook cooking show that I keep posting the bartender tip link on, so you can give money. A lot of my friends are just not working. If I can make a jackass of myself for a few hours and teach someone how to cook a thing, then I’ve given them a skill, and they can sit there and drink and remind you every time you open a beer to click the app and give a dollar to somebody. I’m going to keep putting recipes and cooking.


I also understand that you have a wonderful, weird house.

I call my house Grandma House and it’s a wonderland of weird knickknacks and bizarre items. My coffee table is the letter E from a Winn-Dixie sign and I fixed it up so it lights up.

I was obsessed with the speakers in the Johnny Harris ballroom, and I got ‘em. Sometimes when new friends come over, they’re like, “Is this your flex room? It’s a very strange room.” There’s this weird atomic lamp and wolf plates on the wall from a really embarrassing period in my life.


Everyone has a wolf period in their past.

I didn’t have a wolf period, but my family decided I did and battled over who could buy me the most wolf stuff.


What else do you want people to understand?

The longer everyone takes to do the thing, the longer we’re going to be doing the thing. Originally, I had all these friend saying, “Oh, this’ll be over in a few weeks.” We’re going to be in this through summer. I don’t think people get it. There’s no coming back. We are on a new path now and we have to figure it out.

I don’t know what the future is. Nobody does. Things just truck on like normal, except you can’t plan any vacations in all the fun places you like to go because they’ve all shut down.

We’ll see what happens. The statistic is that 50% of all the restaurants that close from this will not reopen. We’re going to have a wave of new places! Lots of new food to try!

I don’t know what Savannah is going to look like in six months. It’s going to be completely different.
cs 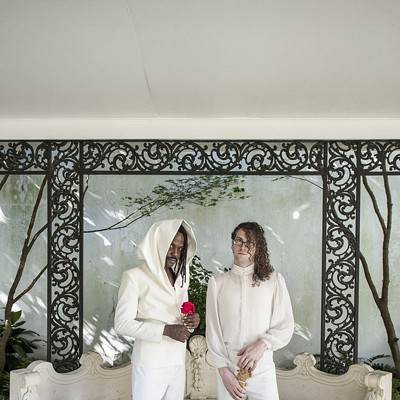