KAMRAN MOHAMMAD is a second-year resident physician at Memorial Health. While this hospital hasn’t seen COVID-19 positive patients en masse like in other places, Kamran and his colleagues feel prepared for what may come their way.

He also hopes this moment in our history moves people beyond calling healthcare workers heroic and encourages them to enact change in our system themselves.

This is Kamran’s Quarantine Chronicle. 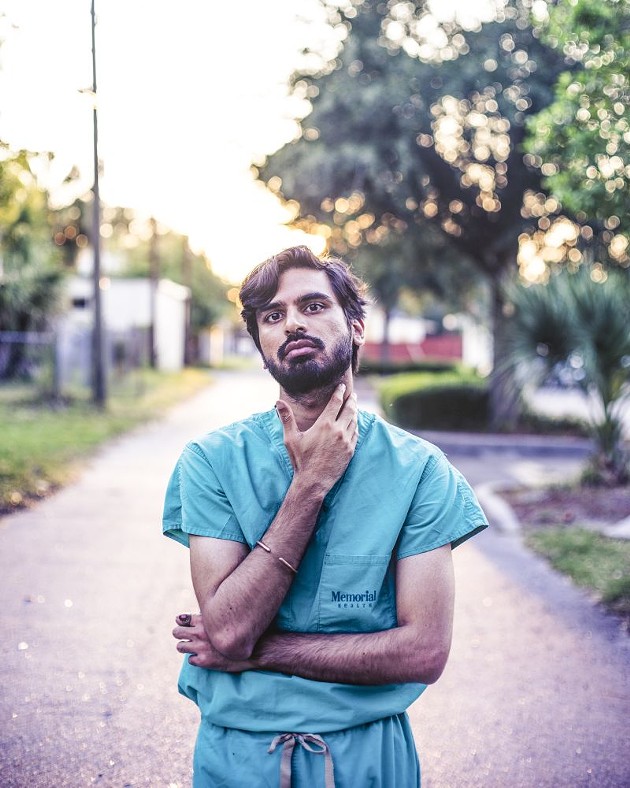 How have things been at the hospital? Have you had an influx of patients?

I think it might be a little early to tell still in this particular area, from numbers I have seen personally. Savannah, I think by the time the virus was reaching here, did a decent job of trying to prevent huge events and businesses being open to the point that it seems like the curve is relatively flat here. Though we do have patients that are positive for COVID that are coming in, but it’s at a steady rate.

And then, of course, because Savannah has a bigger medical center, other hospitals that are more overwhelmed in other cities may transfer patients to us who are COVID positive because they don’t have the resources to care for them right now.

In my personal opinion, there’s also probably some degree of underreporting, given the fact that not many have been tested. I also read an article that they released 400 prisoners out of the county prison here locally, and one of them was positive, so I’m assuming that other people have been exposed within that prison system and they are now in the community.

We don’t really know yet how bad it’ll get here.

What is the attitude with people in the hospital? Do you feel like you’re ready for this?

Yes. If you’re asking about preparedness as far as PPE availability, yeah, we do have it. As a doctor who’s working in the hospital, I do feel supported. I’ve heard reports in other places where people don’t feel comfortable asking administration for protective gear or things like that.

I’m very fortunate that I feel like I’m at a place where I can speak comfortably to authority figures and get what I need from them. They’re very supportive and they try their very best to limit our exposure. Yes, I do spend time in the patients’ room from time to time who are COVID positive, or potentially COVID positive, but I do have protective gear on, and I’m usually not in there for extended periods of time to limit my exposure to them. So we are a good team at Memorial. People are supportive.

How has this changed your life personally?

Obviously, this has changed all of our lives. I don’t know about non-medical people as much, but I keep myself completely isolated when I come home now. I shower twice a day, which I didn’t usually always need to do that. There are a lot of added steps to my routine now, and this is probably going to be the case for the foreseeable future, at least for the next six to 12 months.

I don’t really feel comfortable going out in the public because I have been exposed to confirmed cases in the hospital, and I don’t want to expose other people in the community to it. Socializing is a minimum, which of course it is for everyone at this point, but much more so for me and other people in healthcare.

I can’t see my family for probably at least several months. I have parents who are older, and my dad’s chronically ill as well. It’s a few added layers of isolation.

The positive thing is people who are in healthcare are still working, and I think that’s a nice thing right now, because a lot of people who are isolating and practicing social distancing are not able to leave the house or be out at all. Sometimes just leaving the house and going to work for a week is a reprieve for me, so that’s nice.

Of course, it’s really rewarding. I don’t think I’ve felt as passionate about what I’m doing as I do now. I always did, but it feels even more so right now because of how our entire world is dealing with it. It feels like you’re part of something greater.

In your personal opinion, how does that feel to have people behind you like that and singing your praises?

It feels good, but this is something I’ve been thinking about. I’m very appreciative of people’s expressiveness about what people in healthcare are doing for them and the community at large. It’s incredibly humbling to hear about.

But I also really think it’s necessary for our society in general to try to initiate legislative change and actual societal changes in how we deal with healthcare access in this country. These are things that—it’s not to demean anyone, but it is very easy to clap and be like, “Oh, you’re a hero,” but what are we doing as a society to actually effect change instead of just say thank you? The real thank you would be if we could learn something from this and grow from it.

Are people clapping here in Savannah?

They did write a lot of positive messages on the sidewalk while we were walking in, which is nice and humbling. When I see those videos in New York, I want to cry because it’s really nice that people care that much.

But at the same time, we’re suffering the way we are because there were a lot of things along the way that were preventable in this situation. If we had better access to healthcare ... The fact that, in a place like Savannah and the southeast in general, there’s a lot of poverty, and people who are of racial minorities are going to be the ones who deal with this the worst. Those are all things that need to be brought to the forefront, as opposed to just cheering on healthcare workers. Politicians need to be a part of that change. People need to call their senators and do all that stuff that will really spur change, because this should serve as an impetus for change. Who would have ever thought in our lifetimes we would witness something like this?

It has changed me and other people in healthcare, and I think it’s made us feel more of a sense of empowerment and motivation to advocate for ourselves. We at least feel like the future is going to be different for us, because we’re going to take things into our own hands.