This week, we debut a new series, Quarantine Chronicles, which is a look at life for real people in our community during this time of uncertainty.

Rubi McGrory is an artist and a personal chef for Arnold and Lorlee Tenenbaum, who both recently passed away due to complications from COVID-19. 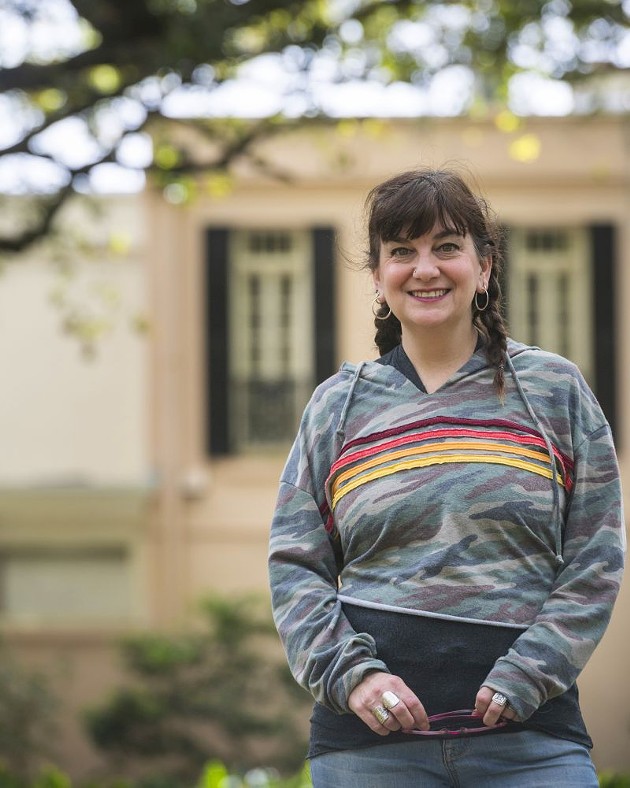 What’s life like for you? How are you doing?

Right now, I’m actually making frosting for a birthday cake for someone. It’s sort of weird because I’m in a situation where I just lost two people that meant a lot to me, and I worked for them, but sometimes when I was working I was living in their house with them in Santa Fe.

I’m first processing that these people are gone, and they were wonderful people. The world needs as many good, kind souls as possible, and we are now in arrears two of them.

At the bottom of that, and not the least of my concerns but not the forefront of my mind, is that fact that I’m unemployed now. I don’t think there’s going to be a huge market for personal chefs for dinner parties anytime soon. I was also supposed to have a solo show that opened [April 3].

I want to talk about the feeling of processing things while being unemployed. How are you managing that?

Two of their daughters are still in town, so I’m cooking for them; they’ve quarantined themselves. It’s this weird thing where I’m quarantined in my house and their house because their house is where I was exposed to it.

Are you feeling okay?

I feel fine. I haven’t been able to smell anything for a week, which is really weird because I’ve got a really strong nose. I’ve had no fever or anything else. I’ve been tasting as many possible cookies as I can to make sure I have not lost my appetite.

You know what? I think I’m so lucky. My husband is home, we really like each other, there’s not an issue of feeling like I’m in an unsafe situation or anything like that. He is a yacht captain; he’s clearly going to be out of work for at least six months. We have enough in savings that we’ll be okay for a couple months.

Part of me feels really helpless that I can’t help people more. I don’t think I should be exposing myself to people. Molly Lieberman did that big push two weeks ago and she was getting the art kits to everybody, and I knew there was nothing I could do to help with that amazing effort.

I’m definitely going to be quarantining myself for at least another two weeks. I feel like there are people who need help, and I don’t know how to help them, which is how my artwork is coming into it. I’m going to circle back and talk about that now.

I don’t have the show opening, and when Peter [Roberts of Location Gallery] and I talked about it—I can’t believe that was only two weeks ago—it seemed like such a premature decision, but I’m glad we did because I was able to shift my focus from feverishly getting work done for the show, to then my focus was, “Okay, so how am I going to make the world a slightly better place as we work our way through this?”

I decided that every day I’m going to make something and post it on Instagram and try to lighten anybody’s mental load. One of the things I’m doing is offering to anyone who wants, I’ll put together a little goodie package and send it to you. It’s going to be random as fuck. I set up something on my website for people to go and fill out.

I can’t imagine what it’s like to be home and unemployed if you’ve got kids in the house, you’ve got to try to educate them, God forbid the kids have special needs.

Tell me more about the Tenenbaums. What were they like?

My heart isn’t just broken, it’s smashed to smithereens. But I am so grateful that I got to know them the way I did. They’re such amazing people, and they’re like the kind of old person I want to be, who was really happy and can look back on their life with gratitude for all the adventures they had and how much fun they had.

Arnold, I think, is one of the smartest people I’ve ever met. He was always reading; he was a strong thinker. He’s a really fair man. He examined all sides of everything before he made a decision. Lorlee has a million stories to tell, and nobody thinks her stories are funnier than she does.

What was really heartbreaking about the way he died in the hospital was that, once he went to the hospital, he couldn’t get any visitors. Their family was very close, and the fact they couldn’t be together or have any kind of memorial is really hard. I think the only consolation is that their parents died together.

This question seems unfair to ask, but when this is over—

What do I want to do when I grow up?

Honestly, I have absolutely no idea. And on one hand, I don’t see any opportunities to do this anytime soon. I write for a yachting magazine, which I’ve done for like ever. I might revisit some of that work.

I’ve always wanted to write a book about my yachting adventures, but I don’t want to be that person who’s like, “I’m stuck in quarantine, so I’m going to learn a foreign language, teach myself a musical instrument, and write the great American novel!”

So, what I am doing is, although I’ve been super busy, I’m trying to give myself latitude to just chill out. I’ve decided that since I know we’re in place for at least the month of April, I’m going to treat it as an artist residency and play around and see what I want to do. But again, I don’t have kids, I don’t have that to worry about. It’s just me and my husband, and pretty soon we’re going to get to the end of Netflix.

The persistence of McDonald's