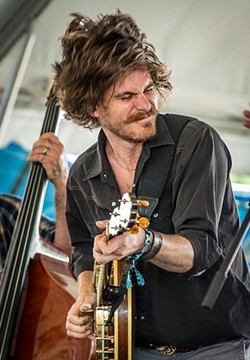 Savannah native Austin Quattlebaum is heading home for the holidays with his signature banjo, guitar and kick drum in tow.

A one-man band with an explorer’s spirit and proud roots, Quattlebaum was born and raised in Savannah, spent some time in the Appalachian Mountains, worked as a river guide, lived in a van while touring in support of his music, and eventually found his way to Portland, Oregon, where he started a bluegrass band, Crow and the Canyon. He also tours with San Francisco eight-piece folk band The Sam Chase & The Untraditional.

Though he may be a resident of Portland now, his childhood home shines through in the swampy tones and sleepy Southern lilt of his banjo and melodies (and in his titling, as well—it doesn’t get much more Savannah than The Ghost Tangled in the Oaks, the name of his 2013 LP).

An upholder of tradition who jolts new light into vintage practices, Quattlebaum’s a talented player, utilizing clawhammer and three-finger banjo techniques, as well as flatpicking on the guitar. He’ll play two full sets of music beginning at 7 p.m., surrounded by the artwork of Maggie Hayes; go tap your toes and welcome the troubadour home.