Bassist breaks out with debut album as Lulu the Giant

YOU'VE SEEN her rocking her full-size upright bass on countless stages, playing guitar and singing on the gigging circuit and, in the rare moments she’s not doing either of those things, dancing in the audience, supporting her fellow musicians.

Rachael Shaner is a staple of the Savannah music scene, and after years of playing with others, she’s releasing an album of all-original material as Lulu the Giant.

Kingdom’s Fall is a peek into Shaner’s musical past and future. It’s an album that’s steeped in tradition but lovingly breaks all the rules. 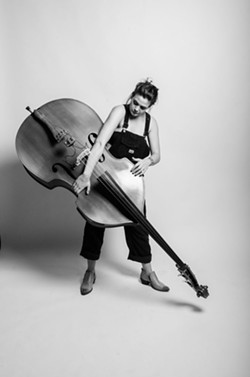 One moment, she’s whisking her audience away in an Americana-style story-song; another, she’s pared down to the bare essentials for a sultry R&B-tinged ballad.

Shaner, joined by drummer Daniel Malone and guitarist Alex Bazemore, releases her debut LP at Trinity UMC on Thursday. We sat down with the singer-songwriter to learn more about her origins and big breakout moment.

So about two years ago you played Savannah Songwriters Series. Was that one of your first performances as a songwriter?

I’ve always been writing, but I didn’t play guitar until then. I’ve always written, but it was always on bass. That show I decided to play on guitar. I didn’t always sing, but I always wrote.

When you write on bass, are you finding a melody line? How do you do it?

Sometimes I hear a melody and I'm not with my bass, so I sing it, bring it back to my bass. Now that I can play guitar, I can totally find the chords, but the bass, it's this comfort thing: "Bass, I'm bringing this song to you, how do you feel about it?"

Then it becomes this difficult thing where I have to write a bassline separately. If I’m writing a bass riff, it has to be separate from the melody I just created. It’s really difficult to sing a melody rhythmically and play a separate rhythm with just the root notes—it’s not even chords. Even though the note I’m singing is eventually in the chord, I’m not playing that note on the bass.

And the rhythms counteract—otherwise, I’d be singing staccato words with one note following the bass. When both of those sides are done, I bring them together and try to run that.

There are a lot of genres on this album. Do you call Lulu the Giant a certain style? When people ask what kind of music you play, what do you say?

I usually say I play upright bass, and that usually changes the direction of the conversation.

Because if I was like, “Oh, I also have this album coming out,” it’s really hard to bring up some super-sultry blues song like “Kingdom’s Fall” and say it’s in the same genre as the straight pop-country song.

I say it’s Southern. The end. There’s gospel in the lyrics, blues rock, roots, then you’ve got some jazz, and there’s country. My background has given me the ability to play many styles.

What drew you to the bass as an instrument?

It was huge. A giant. It was the biggest instrument, and I always wanted to be big enough to play it.

The comment I get the most often is, “Oh, that’s usually a male-played instrument.” Well, usually men are everywhere and dominating everything! To have what some would look at as such a masculine instrument in the hands of a woman wasn’t intentional, it just happened. I didn’t see a lack of strength associated with it; I saw a challenge for me to be able to do it.

I was 8, and I would carry that thing on the bus. The first two seats couldn’t be taken because I would carry it up the stairs, swing it around, and I wouldn’t let anyone help me. I just shunned the fact that there were wheels on some instrument cases—it was totally, “I’m as a strong as I think I am, and I’m as big as I need to be for whatever it is that I need to do.”

I was playing violin when I started—which I hated, it was so loud—and [bass] went underneath everything. It was underground and warm and struck you, but not in a punch-to-the-face way. It was an embrace. And that’s what I wanted to feel all the time: this huge, enveloping sound so subtle that you don’t recognize that it’s already inside of you.

Do you feel like your lyric style shifts with genre?

Absolutely. I still try to stay true to my writing—not compromising my lyrics just to make it rhyme. There are some songs that don’t have hooks. When the style shifts, the theme shifts and the writing style does change, but it’s not a full-on turnaround. There’s still allusions and hints. People can take it at face value, or they can go a little further.

How did you like working with [Kingdom’s Fall producer] Suny [Lyons]?

Love him, so much. He has such an open personality where I was able to bring these fragile things and he just grew them and made them stronger.

It was just like, “Thank you for listening, a lot of people don’t really listen.” Not to get “down-with-the-man,” but especially as a woman, it’s always like, “Are you the drummer’s girlfriend?” No. I’m here because I’m a bassist. There was never a question there.

I brought him like 30 songs. There were some that were really catchy, but I didn’t tell him the songs I personally wanted to do. It turned out, he chose the songs that were lyrically the strongest, and I was thankful for that. When he sent back his list, I was like, “That’s it, he gets it.”

Why Trinity for the album release?

Best. Venue. In. Savannah. The acoustics, it’s beautiful, it creates the atmosphere, and it’s just a stern presence that I wanted already, so I feel like having to recreate that an intimate but also bigger-than-yourself setting is difficult to do, but the fact that this church venue brings solemnity and also allows you to be there fully and openly, and we can rock out, too, and it’s big enough to do that—I think it’s going to be a really cool foundation for us to build on, fill up, and play.