Where: Ships of the Sea Museum, 41 MLK Blvd.

CHATHAM-SAVANNAH Authority for the Homeless Executive Director Cindy Kelley approaches the overgrown forest behind the Blackshear Basketball Complex off Wheaton Street as if she’s walking up to someone’s front yard.

In a way, she is, as this patch of land is inhabited by forty-five or so homeless folks—men, women and children—camping under the trees, their worldly possessions strung up between the branches.

“Hey there, it’s Cindy from the Homeless Authority,” she calls out to two men sitting on crates outside a tent.

“Hey, hello,” one calls back with a wave, a dog lifting its head sleepily next to him.

Technically, Kelley doesn’t have to be so friendly, since the agency she heads owns the land. The three-and-a-quarter-acre parcel was bought last year for $207,000 as the site of the Tiny House Project that will provide housing for 72 homeless veterans, and it has to be vacated within the next few weeks for the bulldozers to clear and level the spot.

“Did y’all get that eviction notice?” she asks the man apologetically.

“Well, that’s good, helping the vets,” says the man, strumming a battered guitar. “It’s gonna be real nice. Don’t you worry about us, we’re heading down to Key West anyway.” 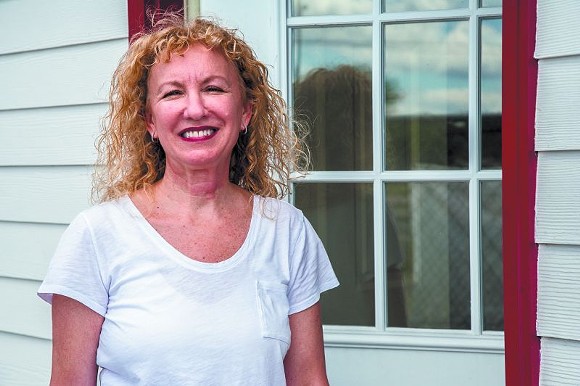 Photo by Jon Waits
‘Some of our homeless veterans are quite frail,’ says Kelley.

Even for those it will displace, the Tiny House Project has generated sweeping enthusiastic approval since Kelley announced it last year. An anonymous donor put up the money for the first model, a sunny 16’x8’ mini-bungalow built by soldiers at Fort Stewart and currently on display at 704 Wheaton Street.

The remaining 71 domiciles—each with its own bathroom, kitchen and key—cost a little less than $7000 apiece to construct and will be arranged in six villages to help establish community and direct residents to available services, including job training and mental health counseling.

“Many of our homeless veterans served in Vietnam, and some of them are quite frail,” says Kelley, whose staff has documented 238 homeless vets in local shelters and makeshift camps. “This is going to be permanent housing for them.”

The $1.7 million project has elicited many promises of sponsorship, and supporters can start with the next land payment of $30,000. That’s what organizers hope to raise at the Tiny House, Big Heart fundraiser at Ships of the Sea Museum on Thursday, May 4.

“We wanted to help keep costs down as much as possible, so we structured the deal so that payments only need to be paid once a year over the next seven years,” explains Lori Judge of Judge Realty, whose firm donated brokerage services to purchase the site. “We hope folks will come together to help the Tiny House Project get over this second hurdle.”

Many people have already rallied: The Ships of the Sea is hosting the event in its open-air Assembly Room, a normally high-ticket venue that is occasionally able to offer discounts for a good cause.

“As a non-profit, we like to support other non-profits, especially on a first round fundraiser like this,” says Sarah Shartzer, the museum’s event manager.

The Savannah Clay Community will contribute 20 handmade ceramic fruit bowls to bid on, and the SCAD Metals & Jewelry Club has fashioned “house angel” pins for the biggest donors.

Food will be available for purchase from Big Bon Pizza and Atlantic chef Lauren Teague, keeping the cost of tickets to the event at an accessible $10, which includes a drink ticket and a raffle entry for a Big Green Egg tailgating grill.

“This is an educational event as much as it is a fundraiser, and we want everyone to be able to come and check out the project,” says Meredith Sutton of Service Brewing Company, which regularly raises money for veteran-related charities in its beer tasting room and has already donated several checks to the Tiny House Project.

“Those who can give more, will.”

While other cities like Kansas City, MO and Racine, WI have broken ground on similar small-scale affordable housing for veterans, the Savannah’s Tiny House Project is unique in its scope and expense with its 72 separate residences, organic gardens and community centers. Residents will pay $210 a month in rent, but community support is essential.

“If we can get the infrastructure in, I’m not worried,” says Kelley of the land payments and clearing the property.

“Everyone wants to sponsor a house.”

She is relieved that the project’s projected success will mean blessed respite for several dozen deserving folks who have served our country.

Still, the woman charged with overseeing the Homeless Authority’s slew of services and compassionate outreach laments that many of those displaced from Blackshear will inevitably migrate to one of the city’s other homeless camps, already filled with tents and shopping carts.

By tracking those sites and the city’s few shelters, CSAH estimates there are 4000 homeless people in Savannah with approximately 1500 on the streets and in the woods on any given night.

Kelley reminds that a solution to Savannah’s homeless situation still present a formidable challenge that will require decisive action by city leaders.

“We need to change the policy on affordable housing and build what we need,” she sighs.

“In the meantime, we need an interim plan, a place to safely and sanitarily accommodate the many hundreds of people who live outside every day.”