IN fitted white tees showing off rippling abs with tattoos up and down in his arms and nary a cowboy hat in sight, Kane Brown doesn’t fit the mold of boot-scoot boogieing country superstar.

But with a voice that recalls his heroes like Alan Jackson and Billy Currington and a natural performer’s magnetism, Brown is storming the country charts—all of them.

As of last week, the 23-year-old singer landed a spot in the Guinness Book of World Records as the first act to top five U.S. country music charts simultaneously.

On October 28, 2017, Kane Brown Deluxe Edition was No. 1 on the Top Country Albums charts; as of press time, it’s still there in its eighth week, and it’s the first country music album in history to do so. The gold-certified single “Heaven” topped Country Digital Song Sales, and “What Ifs,” the smash-hit duet with Lauren Alaina, was No. 1 on Country Airplay, Hot Country Songs, and Country Streaming Songs. 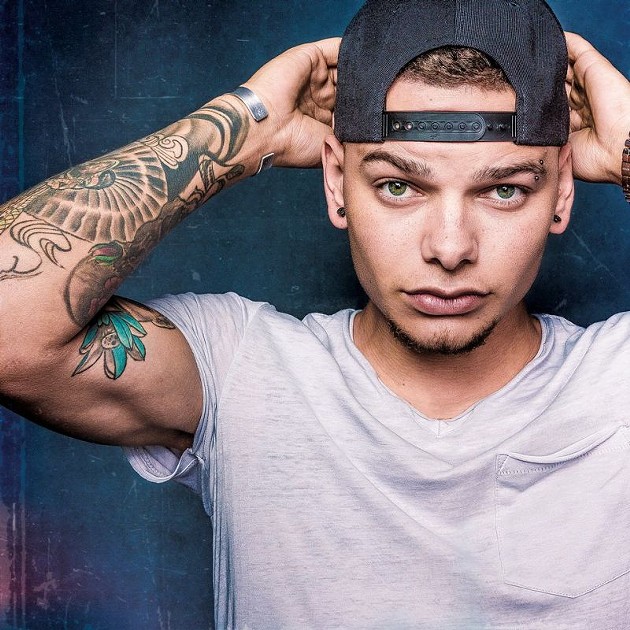 It wasn’t that long ago that a young Brown was checking the Guinness Book of World Records out of his school library and pouring over the statistics. The son of a single white mother and African-American and Cherokee father, Brown grew up in northwest Georgia (he’s been known to rock Dawgs colors).

Times were hard—he and his mom lived out of a car for some time and stayed with friends intermittently. Ready to get out of his small town, Brown attempted to join the Army, but was denied due to his tattoos.

All the while, he was singing. Back in middle school, Brown was a member of the school chorus, where he sang alongside Lauren Alaina. Shy Kane didn’t sing out in class, and Alaina, noting his talents, encouraged him to explore his voice.

“That’s where I found that I knew I wanted to sing,” Kane recalls over a phone call with Connect Savannah. “I found my voice while in high school.”

Alaina would go on to compete on American Idol, finishing as runner-up. Brown was inspired by his friend’s success and auditioned for American Idol and X-Factor, the latter of which picked him up after a 2013 audition.

The show’s producers wanted to fit Brown into a boy band mold; he refused, went home, and started uploading country covers to Facebook, hoping one might get some shares.

Of the videos of Brown singing songs by Lee Brice, Brantley Gilbert, and Billy Currington alone in his room, his take on George Strait’s classic “Check Yes or No” was viewed more than 10 million times.

It was 2015, and he’d never played a gig—but the whole industry was watching him.

In 2014, Brown used Kickstarter to fund a six-song EP, tracked in Nashville with Noah Henson, Brantley Gilbert’s guitarist. It did well, debuting on the Top Country Albums charts at 22.

Then, in October 2015, the single “Used to Love You Sober” arrived and clocked one million views in less than three hours; in two weeks, it had over 11 million. The single was an early glimpse into Brown’s ability to use his enrapturing country lilt against gentle piano strains for a pop/country/R&B crossover sound that’s dominated charts and playlists.

The breakout hit was followed by “Last Minute Late Night” and “I Love That I Hate You,” and soon, Brown was on the road with Florida Georgia Line, learning his way around arenas and the legions of fans who’d become enamored with his voice and looks.

“The first time in the studio with my first album, I didn’t really know what to expect,” Brown says.

An old friend stopped by the studio to lend vocals to a song. “What Ifs,” recorded with Alaina, is now a Platinum-certified hit, and both singers are far away from those chorus class days.

“It was meant to be,” Brown remarks of his and Alaina’s career paths crossing. “It’s been awesome. I feel like I’m being recognized, and it feels good that we’re at a good place on the charts.”

As concert tickets sell out and singles stream, Brown is trying to find time to work on a new album.

“This next album, I want to go into the studio and try and lead them a bit where I want to go,” he explains. “I want there to be one song for everybody. I really think my first album was telling you about my life, and this one’s going to be a fun album—something that, at a live show, everyone can come move and dance and have a good time.”

Until then, Brown’s glad to be back on Georgia soil and singing for his fans.

“Make sure everybody knows the songs,” he advises. “It’s going to be really rockin’ and heavy.”