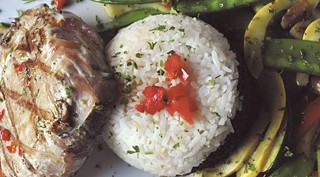 I rarely ramp up expectations when heading to a new waterside eatery on Tybee Island– there are winners, and there are losers. Topsail Bar & Grill, in the former locations of Groover’s, Dewey’s Dockside, et al, falls into the winner category.

Buzz had been good, but indicated the menu had taken an Asian spin – with an decidedly Korean influence. How would bibimbap play on the shrimp docks? Apparently, very well.

I found a menu featuring Yin Yang rice, wok–sauteed veggies and even bibimbap. The more pedestrian offerings designed for tourista palates and less adventurous diners took on a whole new interpretation. There’s no simple burger on the menu here, but a near half–pound burger topped with sliced avocado and grilled shrimp.

Korean barbecue is served savory and with a delicious mountain of stir fried rice. My grilled tuna was truly grilled! It was rare, had a definite smokey flavor and exploded with flavor when touched with a spot of ginger–chile sauce. Sauteed veggies with an ample supply of snow peas were crispy fresh and flavorful – but took well to a few splashes of sriracha sauce.

My friends and I split two apps – golden brown home made hushpuppies served smelling of sweet onion and enhanced by dunking in melted butter. Crab–stuffed, bacon–wrapped shrimp are made fresh in–house, according to the owner.
We were stuffed, but managed to put a hurtin’ on a pair of homemade desserts – a huge triple chocolate cake filled with mousse and topped with thick fudge sauce and a pleasantly balanced piece of Key Lime pie. I’m not a Key Lime pie fan – but will go back for another piece of Topsail’s.

Chef Chris Russell, the intuitive and imaginative driving force behind the remarkable small plates menu at Sugar Daddy’s, has taken his toque and moved on. No word yet on where he will resurface, but it’ll be interesting to see how this affects the fairly new Sugar Daddy’s. The tiny small plates wine bar had gotten a fast start, thanks in no small part to Chef Chris. Staying relevant among picky diners is tough enough – without turnover of key staff.