I meet Randy Akers in his recently renovated, spacious, and well-ordered studio at his Skidaway Island Home. While he enjoyed a prestigious career directing and designing international television commercials, movie titles, music videos and print for Fortune 500 companies, he shares, “I always wanted to be a painter. Always.”

Akers took fine arts classes whilst earning his Bachelor of Fine Arts at Chouinard/Cal Arts, but ultimately majored in Film because, “it was costing a boatload of money and I was on full scholarship living on a shoestring, and I needed to earn a living.”

Following a three-decade film career, Akers came to SCAD in 1997 to teach in the Computer Arts department (later renamed Digital Media). And this presented an opportunity to get back to his first love. The college required him to have a master’s degree; he chose painting, receiving his Master of Fine Arts in 2000.

But again, painting was relegated to the back burner as, “I’m not a dabbler. I needed to be immersed into it.” Akers stands before ‘Bramble and Stone’ in his home studio.

Fortunately for the art world, Aker’s immersion came in 2004, by which time he’d earned a sabbatical, went on vacation to Mexico, and created a series of small paintings called “The Dogs of Todos Santos.”

They sold quickly with profits being donated to an animal rescue sanctuary in Mexico. The dog series earned him attention from art galleries, but two more years of teaching followed in upstate New York while his wife worked on her doctorate.

Returning to Savannah, Akers finally made the decision to commit to painting full-time.

He was happily creating, buying supplies, and entering competitions, when his supportive wife, a senior lecturer at Georgia Southern University, said, “You just dropped ten grand. It’s OK but it’s time to think about replenishing the coffers…As soon as she put that on my shoulders, I started running it like a business. Devoting a chunk of my week – anything from 12 to 20 hours – trying to source out new competitions, new galleries, new possibilities. Making it a job. I was used to hustling from the film industry. If you want to play, you have to hustle.”

The hustle has paid off. Akers has been accepted into Jane’s Art Center in New Smyrna Beach, FL; L/Ross Gallery in Memphis; J Costello Gallery on Hilton Head Island; and Reinike Gallery in Atlanta.

Additionally, he has enjoyed three prestigious residencies. The first was with the Brush Creek Foundation for the Arts in Wyoming in 2015, after which he was invited back two years later to serve as juror. 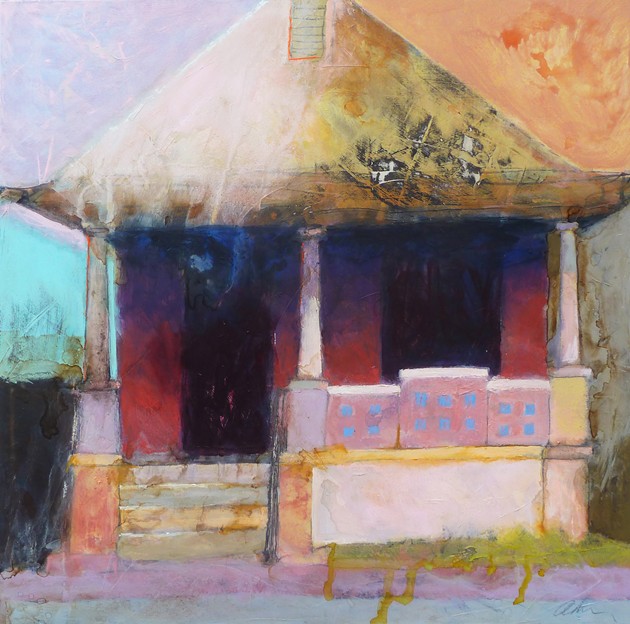 “That got me to Foundation OBRAS in Portugal. The beauty of a residency is to be able to spend three or four weeks with people from all over Europe and talk about all kinds of stuff with other artists, musicians, and writers. Our process of creating a body of work is the same.”

Then in 2019, he was accepted into a residency in a stone pre-famine house at the Cill Rialaig Arts Centre in Co. Kerry, Ireland.

The pandemic caused this last opportunity to be delayed.

Akers recalls, “The minute Ireland opened up, I had my flights booked! That night I couldn’t sleep so I get on the internet to research past residents. I discovered Kari Cahill in Sligo who makes natural pigments and saw she was giving a workshop right before my residency.”

He changed flights, enrolled, and rented a little cottage in Ballinskelligs which he used as a lab to make the pigments he learned about in Cahill’s workshop. “I don’t do it as much anymore. It works on paper, but not on canvas so well.” However, he shows me a canvas where the background color is derived from turmeric, and he’s used blueberries, oak charcoal, peat, and yellow oxide before adding acrylic.

In Ireland, as in other locations, Akers was drawn to the forgotten places, the lonely places, and the abandoned houses in disrepair.

We look at a painting of an Irish cottage, derived from a combination of four or five views. Almost scientific in his approach, Akers is constantly making little studies and sketches as the artwork starts to emerge. There may be multiple paintings below the finished work – each painting becoming increasingly less realistic.

“I don’t want them to be fussy.” He shows me two paintings pulled out of the original rendering of the cottage: Each iteration has become more abstract. Ultimately, he wants to be as loose as possible, not be representational.

“But more representational is what sells.”

There is a very textural quality to Akers’ work, surprising for an acrylic painter. He explains that he uses ceramic tile adhesive for his ground, bitumen - a water-based asphalt - and grout. Then he carves and gouges the surface with chisels and pneumatic sanders and grinders and draws lines with a Dremel.

For Akers, the houses are a metaphor for shelter, social conflict, economic oppression, or racism.

“It’s the narrative and the history that knocks me out. Savannah is FULL of that. The best stuff that I’ve done has been buildings from Savannah. I did a three-week trip through the Mississippi Delta last year and took 1,500 photographs, but Savannah has more to offer. I love driving through Cuyler-Brownsville and seeing the houses on Anderson Street. The Historic Savannah Foundation may be saving houses because of their architectural integrity, but MY perfect house is like a monopoly house – the most basic simplistic elements.”

Akers tells me, “My family came from dirt-poor poverty in Illinois. Great grandfather’s farm was destroyed by the 1925 Tri-state tornado. My father left home at 13 and hopped trains.” His father, he goes on, “could do anything. He could build things. I’ve inherited that figuring-out ability, the ability to be scrappy and self-reliant. That is the quality I see in these hand-built houses that I’m so drawn to. It’s the story that gets me. Why is it abandoned? Why is it here? Who lived here? What is the history and the stories?”

As an example, he shows me a painting of a turpentine farm in Adabelle, about 20 miles north of Statesboro.

“That was grisly, nasty work. It was impossible to get labor after slavery ended, so in 1870 they got a tribe of Croatan Indians to migrate from their homes in Robeson County, NC. They lived in communal houses, and this is the only one left standing.”

For the galleries who represent Akers, the houses are what have taken off. “I think people see emotion and nostalgia. They don’t like to talk about the social aspect, which I’m all about.”

The words from his artist statement ring true: “I drive down the road and see a place or a name that triggers an immediate response. These locations are always in rough condition: messy, dirty, rusty and in disrepair. These sites have been either a source of conflict, social unrest, economic despair, or oppression…I always have to look at the underbelly of those places and convey it in my work.”

Up next for the ever-hustling Akers is a solo show at his gallery in Memphis, a long overdue vacation in Sicily with wife Tricia, and a multi-disciplinary residency for contemporary international artists and writers at JOYA in southern Spain.

And, of course, his next painting…He recently parked by the old Sherwin-William’s store on MLK and had a view of the Georgia Railroad Museum he’d never seen before. He gushes about the perfect view of the perfect fence, the perfect yellow stripe on the road and the perfect lines of the buildings with the giant phallic smokestack rising out of it. Stay tuned.