I’VE followed the same route on evening walks around my neighborhood for years. It’s a rectangular ramble that takes me down shady streets and through several parks. Now I’ll have to find a new circuit.

My route has become popular and there are just too many people out walking, pushing strollers, and riding bikes to physically distance without constantly zigzagging back and forth across the street to avoid close contact.

The good news for me is I can simply shift my route a block in either direction to streets that are less traveled. Although it was developed at the dawn of the motor age and anticipated increasing use of private automobiles, my neighborhood was also designed at a time when most people still walked to where they needed to go.

Again, I’m lucky to live i n a place where parks and sidewalks are plentiful.

Most Savannahians aren’t so fortunate. Almost 75 percent of streets in our city lack sidewalks. 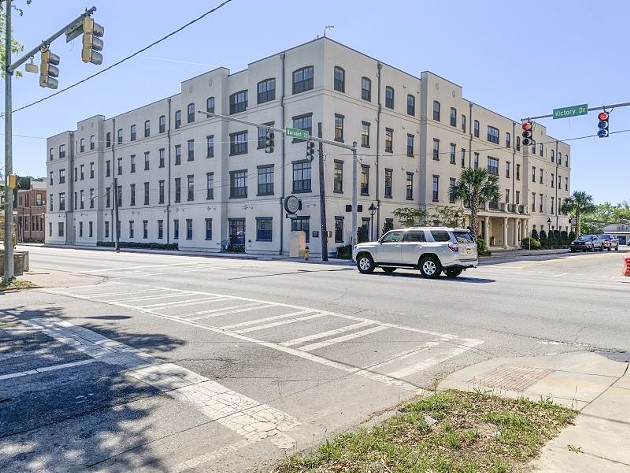 A March 27 estimate by StreetLight Data and Cuebiq suggests vehicle miles traveled in Chatham County is down between 48-58 percent. Wide streets, such as Victory Drive, are now wide open, which encourages some drivers to speed. At the same time, more people are out walking and riding bikes. Photo by Kim Turner

Many Savannah residents can’t open their front doors and walk to a park in less than five minutes. I can walk to four in that time.

“I think it’s important to acknowledge how dramatically and quickly this pandemic has exposed systemic inequities in so many aspects of daily life from healthcare and employment to housing and access to food, and of course, transportation,” said Jennifer Toole, president of Toole Design, a planning, engineering and landscape architecture firm with offices in the U.S. and Canada.

“It’s also important to reflect on the fact that these inequities have been there all along and were a daily reality for millions of Americans before COVID-19.”

She made her comments while hosting a April 2 webinar called, “Rebalancing Streets for People,” which explored how to reconfigure streets, at least temporarily, to provide more safe places for people to walk, bike, and run while maintaining a safe physical distance from each other.

The solutions developed to achieve this goal must be implemented with “equity, ethics, and empathy,” Toole said.

With motor vehicle traffic down some 40 percent nationwide, many cities are opening traffic lanes and even entire streets to people as a means to relieve pressure on increasingly crowded sidewalks, trails, and parks.

“We are seeing that traffic volumes are going down, and pretty significantly. But we are also recognizing that every road now looks like every car commercial we’ve ever seen in our lives. The roads are wide open and that’s accommodating faster speeds” he said.

“This is a troubling trend given that we have more people out walking and biking, whether they are trying to get to their essential jobs, or just out to get groceries or fresh air,” he said.

As weeks of sheltering in place go by, people will become even more desperate to spend time outdoors and it’s best to plan and put safety measures in place now to meet demand, instead of ignoring it, Toole said.

There’s also growing speculation that high demand for safe places to walk, bike, and roll will persist after the pandemic peaks. People may not be willing to surrender an expanded public realm to car traffic, once they’ve benefited from improved safety and access.

Gil Penalosa hopes they won’t. He’s founder and chair of 8 80 Cities, an international non-profit organization that endeavors to enhance mobility and public spaces and create “vibrant, healthy, and equitable communities.”

For decades, he explained, “we have been building cities that are unsustainable. I hope we don’t go back to the past.”

And permanent. He offered the Eiffel Tower as an example. Constructed for the 1900 Paris Exposition, it was originally scheduled for demolition 20 years later.

Like Toole, Penalosa said the crisis has revealed the cataclysmic impacts of poverty and he urged communities to focus on their most vulnerable residents.

That’s what Armand Turner, Healthy Savannah’s program manager for physical activity, is aiming to do through his work to engage the public in planning for the Tide to Town trail system.

“Over the past few months Healthy Savannah has been making an effort to work with the residents of Savannah’s under-served neighborhoods to bring more opportunities for active transportation,” he said. Although his efforts have been interrupted by COVID-19, he said intends to resume neighborhood outreach as soon as circumstances permit.

“The communities we are working with are rich with history and have played a vital part in making Savannah what it is today,” Turner said. “But when celebrating the diversity, we also must not ignore the disparities. Doing what we can to create safe, activity friendly routes for all of our neighbors is our top priority.”

Cycling and diversity: The larger context