"Eradication" is up now through Dec. 6 at In Vino Veritas at 102 E. Liberty St. Hours of operation are Monday-Saturday, 4 p.m. until late.

WHEN Rebecca Slivinsky shaved her head almost two years ago, she didn’t realize how it would impact her work.

She shaved it in solidarity with her mother, who underwent chemo for breast cancer and lost her hair.

“It got me questioning these ideal standards of beauty that women question every day,” Slivinsky shares. “I had a lot of comments from strangers. One in particular stuck with me: the employee checking my ID at the liquor store said my hair in my license looked better the other way.” 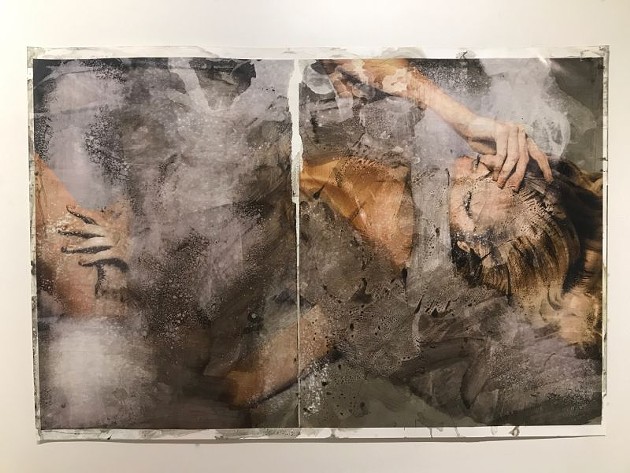 Unwarranted comments like those became so frequent that she began to look deeper.

“I wondered where these beauty standards came from,” she remembers, “so I started looking at the media.”

That examination led to the body of work in “Eradication,” Slivinsky’s exhibition up now at In Vino Veritas.

Slivinsky pulls pages from magazines and uses Citra Solv to lift the ink off the paper, obliterating or obscuring the woman’s image in different ways.

“I started by looking at ads from the 1950s and I manipulated the image using cleaning products to talk about the domesticated housewife,” says Slivinsky. “The whole reasoning behind the cleaning products is transformed later on, and it becomes not so much about the ‘50s housewife and more to obliterate the woman’s objectification in the image.”

Slivinsky also wasn’t able to personally relate to a 1950s housewife, so she switched to using contemporary ads, which typically depict thin white women. As Slivinsky knows as well as the rest of us, representation is important.

“I’m interested in the everyday consumption of the ads we see,” she says. “What’s so toxic to me is little girls going to CVS and Walmart and going through Cosmo and seeing those ads.”

Media consumption is relatable to all of us because it is constant and ubiquitous.

“I’ve had a lot of positive reactions [to the work], especially from women,” says Slivinsky. “I feel like this issue is so relatable, no matter who you are. I know there’s definitely a parallel with men’s portrayal in magazines, but what am I going to say about that?”

Through her study of magazines, Slivinsky has noticed a more diverse representation of body types.

“The thing is, I feel like women of different body types are getting represented more, but I still feel like this one type of woman that seems to be portrayed, and it’s not exactly realistic,” she says.

Slivinsky was also part of the ON::VIEW residency at Sulfur Studios back in the summer, which allowed her to further hash out her ideas.

“It was a chance for me to continue the same bod of work that I had been working on, but with more outreach,” she says. “I was able to donate $100 to Planned Parenthood.”

The residency pushed her to explore the media in different ways.

Slivinsky, who is currently pursuing her MFA in painting from SCAD, has plenty of time to hash out the ideas presented in “Eradication” before she graduates in 2019. Until then, she’s happy to foster conversation.

“I just want to bring attention to an issue that I think causes underlying anxiety,” she says. “Every time I talk about my art with somebody, it sparks some different type of conversation.”