WOULD IT surprise you to learn that two of the biggest issues that we yelled about last year had their origins in the Reconstruction Era?

You even can get a National Park Service passport stamp there.  But RENM is still very much being born and still a work in progress.

“It takes a while to get going,” says Dawn Davis, the outgoing acting superintendent for RENM. “As with any new thing, there are foundational pieces that need to be put in place to make sure that we’re moving the park in the correct direction.”

Indeed, RENM’s “Foundation Document” – its core management plan and mission statement – is set to be released any day now. And a new permanent superintendent also comes on board soon. But what is RENM? And why is it important to us, 40 miles away? 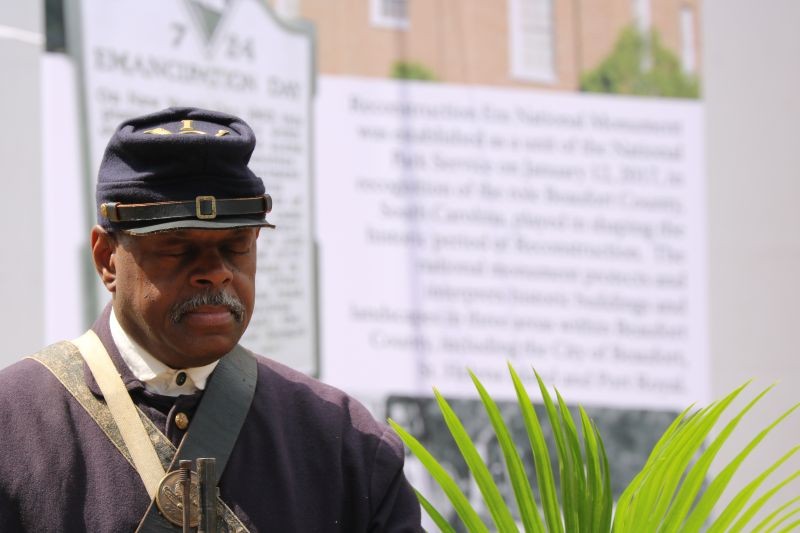 Photo by NPS
A living historian represents the thousands of African Americans who enlisted and served around Beaufort during and after the Civil War.

A dream of history buffs, Civil Rights leaders and area tourism boosters for years, RENM will tell the story of Reconstruction, when the federal government – imperfectly but with literal troops on the ground – set out to lift up the newly freed people and change society.

It didn’t last – leading to many of today’s problems. And although Reconstruction was a national experience, Beaufort is a great place for RENM. Beaufort was one of the first places under Union Army control where, in 1863, former enslaved people started agricultural communities and lasting political, religious and educational institutions.

But none of these buildings has exhibits or is open regularly. Indeed, Naval Hospital Beaufort is behind military security gates. It’s all waiting on plans and money.

The potential here is what could come as the next few years unfold. These four sites eventually will have staff, programs, exhibits, maps and brochures – things you expect at NPS destinations. But nothing prevents RENM from talking about other nearby sites.

Rangers already have walked visitors from the old firehouse, which serves as RENM’s office and its future visitors center, to the grave of Robert Smalls, the enslaved man who escaped and served five terms in the U.S. House during those heady years. The Beaufort History Museum and two parks on Hilton Head Island are “partner sites.”

The U.S. Senate last month held hearings on a bill, already passed in the House, that would establish a “Reconstruction Era National Historic Network” to bring even more sites into partnership. That presents opportunities for two Savannah sites.

The Green-Meldrim House, where “40 Acres and a Mule” came into being, and First African Baptist Church, where freed people played key roles in Reconstruction, are both potential RENM partners.

“It’s so much bigger than a monument,” says Beaufort Mayor Billy Keyserling, an early advocate of what’s really a movement. “It’s unleashing stories of our past that speak to our future. Understanding these issues and how they came about it so important.”

Look for Henry Louis Gates to come to Beaufort in March for the release of a new TV series on Reconstruction. Support the NPS. And don’t wait to visit anywhere and learn anything you can about what America did – and didn’t do – after Emancipation. There are tons of ideas locally.

Like Reconstruction itself, the Reconstruction Era National Monument is a promise but not a guarantee. We can shape its creation. Just like we can create a new nation again.