In Georgia, recycling isn't just important for the environment. 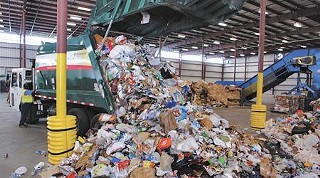 A view inside the City's recycling facility

Savannah's recycling program is six months old, and so far citizens are doing well with the exercise in environmentalism.

Before instating curbside recycling, back when eco-minded citizens still had to sort their materials and drive them to drop off centers, Savannahians diverted an average of 100 tons of recycled material per year. Now, with easier access thanks to curbside pickup, the City is bringing in about 500 tons of recyclables per month, according to Curtis Sanders, Director of Recycling and Litter Services for the City of Savannah.

"As far as participation goes, [the recycling program] has exceeded our expectations," Sanders says. "Not everyone is recycling, but the ones who are doing it are doing an outstanding job."

While such a dramatic increase of volume in such a short span of time is commendable, there remains a sizeable number of residents who remain uncommitted when it comes to recycling, something the city and state hope to remedy with a new viral campaign aimed at educating people about how important recycling is in Georgia, for our environment and our economy.

It may be a surprise, but Georgia is home to the second largest recycling industry in the United States, surpassed only by California.

"We have the second largest end use infrastructure for recovered material used in re-manufacturing new products," explains Gloria Hardegree, Executive Director of the Georgia Recycling Coalition.

"What we have is markets, homes for the materials that we recycle in the state," says Randy Hartmann, Director of the Department of Community Affairs Office of Environmental Management. "One third of [plastic beverage containers] recycled in North America come to Georgia to get recycled into carpeting."

That means a lot of jobs depend on not tossing out that plastic soda bottle, and the state's thirst for recyclables doesn't stop with plastic. There are strong markets for paper, aluminum and glass, among others. According to Hartmann, of the 16 paper mills in Georgia, nine rely solely only recycled fiber to produce their goods.

"These businesses create jobs and a tax base for the jurisdictions in which they operate, contributing to positive economic impact in our state," Hardegree says.

Currently only about 45 percent of Georgians are committed recyclers, which translates to 2.6 million tons of re-usable material being lost to landfills every year. That these materials are being discarded damages the bottom line of these companies, as well as the environment, by forcing them to import recyclables from around the country.

"We have this recycling industry that needs this material," says Hartmann. "Aren't they a lot more viable as a business if they can get those raw materials closer to home?"

This need has been a driving force behind the state's new viral marketing campaign, built around the website YouGottaBeKidding.org, which tries to use humor to help convince non-believers that they need to be part of the solution.

The ads place two proud non-recyclers, Tommy and Maria, in the spotlight to share their reasons for not recycling. "Hey, we'll just find another planet for your kids to live on," Tommy proudly proclaims in one spot while wearing a T-shirt that says ‘I don't recycle.'

Another slogan from the campaign, which will appear on drink coasters in some bars across the state asks, "Does dating my ex count as recycling?"

Hartmann hopes the light-hearted campaign will help draw people to the website and teach them how big a difference they can make. "I didn't realize the importance of recycling until I came to Georgia," he explains. "Recycling one aluminum can is the equivalent energy savings to run a computer for three hours." He hopes tangible facts like that will show people the impact they can have.

While Savannah's capacity to recycle has improved drastically, even committed recyclers in the city could still be doing a better job, something the new marketing campaign hopes to teach as well.

Of the 500 tons of materials recycled in Savannah every month, 10 percent of that is actually non-recyclables people mistakenly put in the bins, which can cause contamination that renders larger amounts of recyclables unusable.

"I think our biggest challenge, other than the current economic situation, is contamination," Hardegree says. "The main issue is to change [people's] mindset from ‘waste' to ‘recoverable resources' that allow us to save natural resources while creating and maintaining jobs that contribute to economic development in Georgia."

Sanders estimates that even those who currently recycle could still be throwing away up to 20 percent of their recyclables. "If we could all be better recyclers, with no increase in actual participation, we could probably pick up another 100 tons or more," he says.

For everyone involved, hope for improving the situation rests with the new marketing campaign. "The ability to recycle is out there," says Hartmann. "What we've done is a lousy job of getting the information out there as to why it's important to do it, and how to do it."