Barbecue is about community. Bountiful plates of painstakingly cooked meats are often shared across the dinner table with more Southern sides than most diners know what to do with. Sharing lovingly cooked hearty food with others is how community is built.

For one new food truck, Reece Barbecue, the community aspect of barbecue means so much more. What started as a way to contribute to his community has now blossomed into a profitable business.

The owner and self-taught meat smoking master, Maurice Green, took the first step to creating his empire 17 years ago in an attempt to give back. As part of the Omar Temple No. 21 Shriners, Green started cooking at community events serving hotdogs, burgers, and the works. After leaving Omar, Green began working with Shooting Stars which soon followed with Savannah Stars, where he continued his philanthropy through food by selling dinners all year around at various events hosted by each organization. 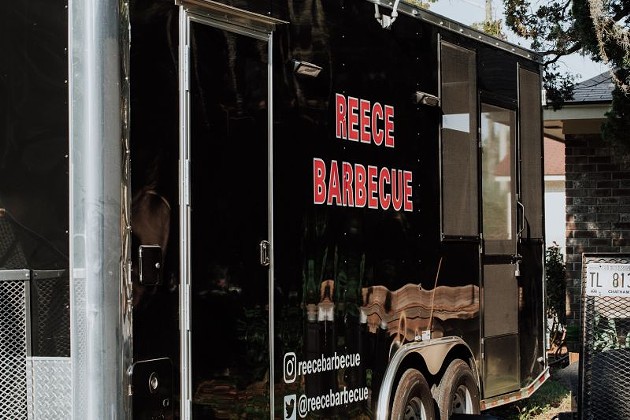 The idea was to give a little barbecue in order to raise funds for better uniforms and equipment. “I watched how [the barbecue] raised money, and people liked the food. So I came up with my own recipe as I was cooking all the food,” Green explained as we sat inside of his shiny new food truck smelling the food that was smoking in preparation for the upcoming weekend.

The barbecue dinners continued year after year, which allowed Green to perfect his recipes while raising thousands of dollars to share with each organization. Even better than his barbecue was the effect the work was having on the kids. “We were always looking good, in the whole community, with the best uniforms. We changed the whole game. We followed another team called Savannah Staggs. They had the blue helmets, so we went out and we go the orange helmets. Everyone else had white helmets because they used the city equipment, and we did not use the city equipment. We started fundraising on our own and buying our own uniforms,” Green smiled and told me.

Those who loved Green’s food began to ask for catering services. As a natural next step, Green took the opportunity to continue his barbecue outreach by cooking for weddings, family reunions, and everything else in between.

Mind you, Green did all of this work while maintaining a job with the City of Savannah until the time came for retirement. He even cooked for his coworkers from time to time. “I get to work in my passion. I do not have to wait until I am sixty-three, sixty-five years old to say I am going to go try what I always like to do,” Green explained.

He elaborated, “I figured one day I would try to get a food truck or a food trailer. At first I thought I would get a brick and mortar until food trucks came out three years ago.” 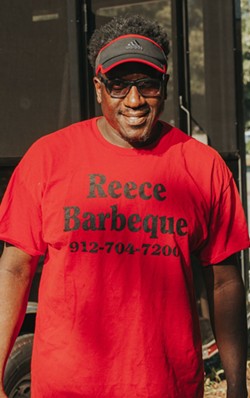 As they say, the rest is history. Green worked double time until he was able to accomplish his dream and buy his very own food truck. The name came naturally, giving credit due where it was owed. Reece Barbecue also designates to everyone that this is his barbecue and no one else’s.

Reece Barbecue, although only on wheels for a few short weeks, has been an absolute hit with the community—constantly selling out and receiving five star ratings on his social media platforms. According to Green, “I sold out last Saturday on Ogeechee Road. The demand on the food down there was so high. I did not know it was going to be like that. That was only my second week being out on the corner, selling.”

Just because Green and Reece Barbecue hit the big time does not mean the giving back has stopped. Now Green is able to drive his mobile smokehouse to various community and charity functions throughout Savannah.

As for the smoking process, Green uses wood that is native to Savannah. White oak, water oak, red oak, laurel oak, and hickory are just some soaked wood chips thrown onto the grill before smoking. “I don’t like live oak; it tends to be a little too dark. It is a hardwood tree, and it gives out a tart taste,” said Green.

To be expected, Green would not share the secret parts of his recipe, but he did enlighten me as to what sets his barbecue apart. Barbecue is like a thumb print. It’s unique to each person that cooks it.

I did learn how to put that fingerprint on your meat. According to Green, preparation is key, along with heavy seasoning, using good meat with good fat lines, and learning from others. He told me, “I don’t write anything down, I know what I use. I only use a number of seasonings and how I put everything together on certain foods.”

The meat on his menu includes pulled pork, ribs, turkey legs, and chicken. And for the sides you will find red rice, dirty rice, collards, baked beans, cabbage, and squash and zucchini.

“I don’t use barbecue sauce—my thing is the meat. I do not put any sauce on it when I serve it to them. They get meat with no sauce,” Green elaborated, “I do not have anything to hide, so all I do is cook the meat. You get to see the meat and you get to taste it.”

Reece Barbecue has set up shop on the south side of Savannah but can also be found at many of the various summer events around the city. To give back like Maurice Green has done for so many years, you can find his location on his Facebook page. But be warned: get to his truck early before all of his food sells out. 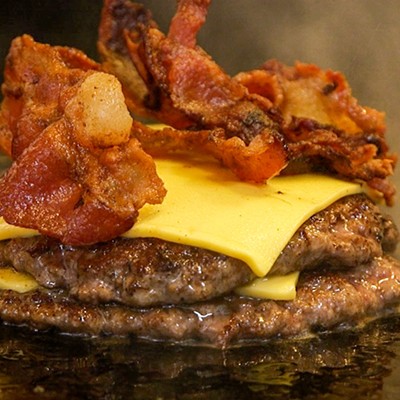 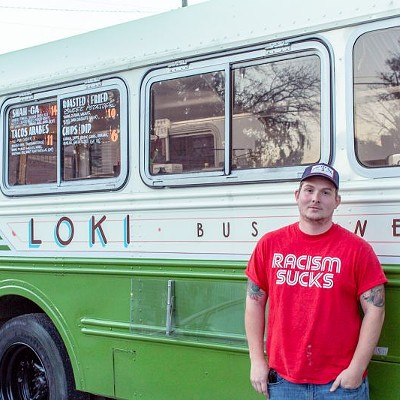