REEL BIG FISH rose to prominence during the third wave of ska that emerged in the late 80s and early 90s. It was something of a punk rock infused version of the genre, that saw bands like the Fish achieve critical and commercial success alongside the Mighty Mighty Bosstones, Less Than Jake, and Fishbone.

The band is still touring, decades later, amid a few lineup shifts. One of those came in 2004 with trumpet player John Christianson joining the fold. He’s still with the band to this day, and has contributed to several of their albums.

It was evident on our call with him, ahead of the band’s Victory North gig on Wed., Feb. 26 as part of their This Life Sucks...Let’s Dance! tour, that he loves what he does for a living. 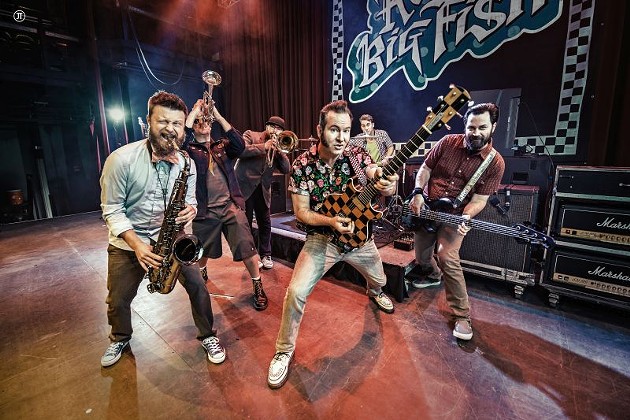 It’s great to get to talk to you about being in this crazy band!

[laughs] Hey, to be able to make a living playing music for people that love what you do is the best job in the world.

Prior to joining, did you know the guys? How did you end up joining?

I went to high school with Derek Gibbs, our bass player. He’s two years older than I am, and when he graduated he started playing in a ska band and I went away to school. Occasionally, I’d go to their concerts. Reel Big Fish was having some internal strife around the time that they were recording Cheer Up!, and Aaron [Barrett, lead singer and remaining original member] wasn't sure that the band was going to go on anymore.

That must have been so crazy to jump into a band like Reel Big Fish. Especially at that point, when they’d already achieved a lot of success and had cultivated a dedicated fanbase. What was that first little bit of time in the band like?

It was definitely a learning experience! Being in a band like this, you can do whatever you want in your off time, and that tends to get people into trouble. I had to learn that. I had to go crazy a couple of times, and experience that excess that the road can provide. I learned that I’d rather keep my job than party all the time.

I feel like a lot of people don’t think enough about that. Having music as a full-time job does mean that you have some freedoms, but it’s still a job.

And you have to learn how to take care of yourself to maintain your relationships. I have a wife and a 7-year-old daughter, and maintaining those relationships while being gone for seven months out of the year is a real learning experience.

The whole third wave thing is fascinating because there were so many great bands that came out of that. What’s maybe the most amazing thing about it is that bands like Reel Big Fish still have incredibly passionate and dedicated fan bases that allow them to keep going. To what do you attribute that longevity?

You have to have songs that people know and love, that become part of the lexicon of people’s lives. That’s a testament to Aaron and his ability to write songs that people really love. But if he would’ve written those songs and we would never have toured, it wouldn’t be the same. Everyone loves coming and seeing a Reel Big Fish show because it’s their chance to forget about all the shit that happens to them during the rest of the week.

They go and have a good time, and learn how to laugh at yourself. They laugh at the absurdity of life, and we definitely really need that.