“I did too much research,” she confesses. “Everyone told me I needed to stop!”

Seidl’s thesis, “Tell Me Who You Are Haunting, and I’ll Tell You Who You Are,” explores the idea of haunting in all its forms. Among other ties, she incorporates Martin Heidegger’s idea of the Dasein, a being that confronts mortality, and refers to André Breton’s surrealist novel “Nadja” in the title of her work.

The thesis will be at Alexander Hall Gallery Oct. 9-26. In lieu of any live events at the gallery, there will be a virtual walk-through on Oct. 9, as well as an exhibition video slated to be released near the end of the exhibition.

Through her extensive research, Seidl creates a moving body of work that perfectly captures that haunting feeling.

Since she was a child, Seidl has been keenly aware of death.

“There was this deep awareness in me since my earliest recollections about death and the dread of it,” she says. “I don’t know if part of it is related to my Catholic upbringing, but I think about eternity and the opposite of eternity, and I don’t know which one was more upsetting.”

To cope, she sought ways to cling to the things she loved to offset their temporality.

“We are these transient beings and we don’t last. Part of the things that make our lives beautiful is just that: it’s fleeting and it’s beautiful,” she says. “The idea of haunting, for me, is about finding ways to bring those memories back to you.”

In her thesis, Seidl writes about the element of identity and how haunting influences that. She doesn’t exclusively define haunting as something paranormal; rather, she sees haunting as things that we have lost.

“For me the notion of haunting is so alluring because it is so ripe with connotations,” says Seidl. “Our ghosts can take the shape of our fear, desire, anxiety, memories. But the desire to be haunted is born out of love. Most of us eventually accept the pain of loss so that we can hold onto cherished memories. It’s a more pleasant alternative to the permanence of death.”

This can be found best in the painting “Nocturne of Remembered Spring,” whose title references the work of Conrad Aiken.

The painting depicts a man and woman standing together, but the man is faded and almost looks like an apparition. Seidl admits that the ghostly effect first began as an accident: she didn’t like the way the couple looked and found it to be too twee.

But after going through the piece with a power sander and removing him from the painting, she loved the effect and the statement that the piece now made.

“Youth is all fleeting—it doesn’t last,” she says. “You don’t know if he’s a ghost or a memory; he could be anything. It’s open to interpretation.”

Further, the painting ties in the notion of romantic love as being fleeting.

“For someone who thinks about death, finding the love of your life and getting married and realizing that one day, one of you is going to exist without the other one,” she says. “With great love comes this risk, and this fear.”

Seidl was also inspired by Heidegger’s thoughts on death and life.

“What is this mind-boggling reality we’ve been thrown into? For Heidegger, it is our death that defines our life and gives it meaning,” she writes in the thesis.

The idea of Dasein is used in one of her earlier works, 2017’s “City Street,” which captures a woman in a busy sidewalk screaming out in fear while people around her don’t notice or react. The painting captures Seidl’s anxiety and was created before she ever knew about Heidegger, but the idea fits so perfectly.

“The written component of my thesis talks a lot about existentialist philosophy,” says Seidl. “Where we all tend to wander through life blindly and we’re okay with that, the Dasein is aware of the darkness and aware that he’s been thrown into this world of no purpose and no compass.”

Seidl’s meticulously-researched thesis is shadowed only by the beauty of her paintings, which tend to capture a Victorian-era feeling through a slightly Impressionistic style but with her own twist. Seidl often uses reductive techniques in her work, wiping things away or going back through it with a power sander. The resulting feeling is slightly aged, slightly haunting, but beautiful all the same.

“I can carry sensation in my brush work or the mood in color,” she says. “A lot of the techniques I use bring them a little more in time.”

While her body of work is on display now, Seidl notes that her written thesis may never end. She’s fascinated by the things she studies and loves bringing them into her artwork, so expect more of the same type of art from Seidl in the future. 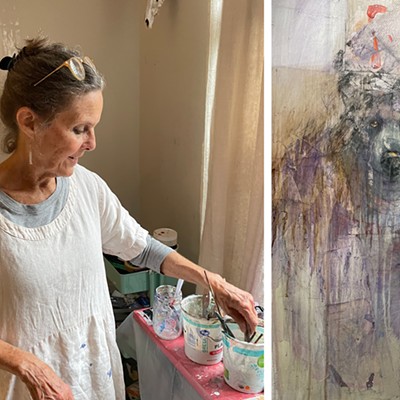