A banner year for local art so far

Lauren Flotte is a co-founder and board member of Art Rise Savannah, which produces the First Friday Art March and Art Rise Exhibitions.

WHEN AMIDST something great, you feel it—pulsing, pushing and tingling. The energy is palpable.

This past March, at the First Friday Art March* I felt it. The air was thick with activity as marchers bounced through the Starland District.

There was a gathering at Non-Fiction Gallery for Heather MacRae-Trulson’s “(un)Framed” a show of small abstract watercolors on paper, exploring architecture and offering an intimate look into the artist’s mind.

A breezy trolley ride to Desoto Avenue brought the Starland Wall-To-Wall Live Illustration Battle. A crowd surrounded illustrators Johel Rivera and Jake Larsen. Stationed back to back, they articulated forms with black paint on 8’x8’ walls, propelled by live music.

While that evening was electric, in the past six months I’ve had countless magical nights charged by a sense of creative mass.

This density is fed by public celebrations of the arts and a diversity of expressions. Looking at the visual arts in 2015 reveals why the cultural climate is rising.

Notably, Best of Savannah winner Jose Ray’s murals popped up across Starland. Late last year Ray livened Drayton Street with a mural, a graceful tree cradling a lounging book reader, on the side of 40space.

A jump away on the corner of Barnard and Victory, Ray recently completed a piece expressing connections between humans and nature in brilliant hues.

The menu of performances for the night included “Cellphone Concerto” by Collin Richard wherein he conducted a pseudo-symphony of electronic sound by texting cell phones.

Allie Sherman also served a stark performance. In “The Better Way To Catch A Snake” Sherman blindly battled a punching bag in a tense performance exploring athleticism, aggression and vulnerability.

She reprised the concept for “Transilient” at Non-Fiction, teaming up with Jo Noble and Moss. Noble’s installation was entrancing. A full classic yellow rain suit sat stooped, empty but postured as though it contained a figure as projected rain fell on the pensive form.

In May, Jeremiah Jossim’s outdoor installation, “Shrine,” presented a powerful experience. On a large concrete slab two small fires burnt inside a rectangular space formed by six tall tree limbs standing upright on stones and two altarpieces at either end. It invited and quieted the soul. 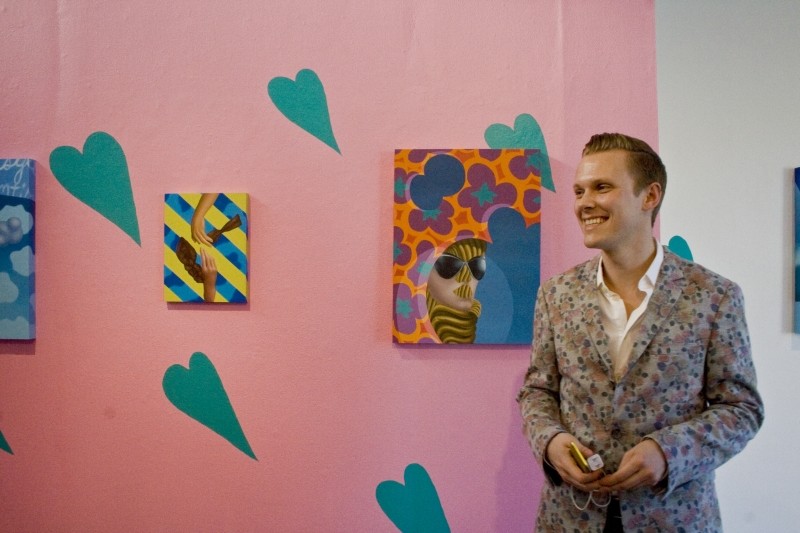 Artist Ben Tollefson at the opening of his exhibition ‘The Distance That Separates One Person’s Heart From Anothers’ at Art Rise Exhibitions.
>


Ben Tollefson staged a Lisa Frank-esque gallery takeover for “The Distance That Separates One Person’s Heart From Another’s” at Art Rise Exhibitions*.

Tollefson’s works pushed past the canvas onto the walls. Wispy teal hearts blew like dandelions across the scorched pink walls adorned with glimpses into his bizarre plastic world, where patterned space collides and fractures.

Up the street, Sulfur Studios opened its doors this year, quenching a thirst for artist studios and gallery space. A true boon to the art scene, since opening the space has welcomed in crowds at each event, whether it be a bizarro puppet show, open studios, or exhibitions of works traditional to experimental.

The other notable newly minted venture is Savannah Art Walk.

Each first Saturday, founder and producer Tiffani Taylor welcomes guests with wine and escorts them to 20 downtown galleries including Kobo Gallery and The Savannah Gallery.

Downtown is also home to Best of Savannah’s top Art Gallery and Tattoo Studio, The Butcher.

Most recently, The Butcher unveiled “The Mermaid Circus” featuring paintings nearly as creepy as they are colorful by sisters Lisa Ocampo and Tiffany O’Brien. At the opening Dame Darcy, who herself occasionally moonlights as a mermaid, practiced palmistry and turned tarot cards.

Exhibitions at the Law School are among Savannah’s hidden gems.

Venues like Roots Up and the Beach Institute offer alternative artistic perspectives that round out and strengthen Savannah’s cultural offerings.

This is essential as, the unmistakable energy from the arts emanates not only from the abundance, but also the richness and texture of activity.

So, hats off Savannah. The first of 2015 was a true reminder why myself and countless others remain devoted to this place. You’ve got your own unique brand of artistic magic and the spell is only getting deeper.