Scrooge gets a new face in ‘A Christmas Carol’ 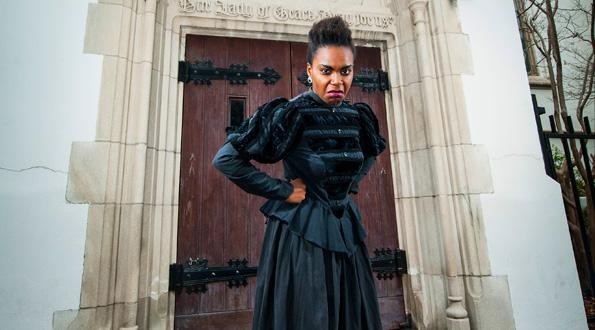 The latest interpretation of his Victorian holiday classic might have Charles Dickens turning over in his grave — with joy.

Always interested in poking at stuffy societal conventions through his writing, Dickens would have marveled over this season’s theatrical collaboration between community youth program All Walks of Life (AWOL) and the City of Savannah Department of Cultural Affairs.

While Dickens’ A Christmas Carol already addresses the coldness of commerce over humanity and the evils of class discrimination, this winter production also amps up the context with some good old–fashioned genderbending: In a move that would have made the Victorian ladies faint, director Jonathan Johnson has cast a woman in the role of Ebenezer Scrooge, that “squeezing, wrenching, grasping, scraping, clutching, covetous old sinner.”

“I wanted to do something different, put a new spin on a story that everyone already thinks they know,” says Johnson, who has also directed local productions of For Colored Girls by Ntozke Shange and Before It Hits Home, Cheryl L. West’s homage to the AIDS crisis in the African American community.

Johnson didn’t actually conceive the change–up until he met Tamara Jackson, a recent SCAD performing arts graduate who answered the audition call. Her strong presence and acting abilities planted the idea that a new face for Scrooge was the perfect way to make Dickens’ tale relevant to diverse audiences in 2012.

“I think accepting a female in this role will make the audience think deeply,” says the Alabama native.

“It’s been a challenge,” admits the 23 year–old. “This is the most exhausting character I’ve ever played, and I’m onstage ninety–five percent of the time. Scrooge is such an angry and bitter person, it takes a lot of energy.”

Johnson’s creative casting brings complexity to the role, adds Jackson. “With Scrooge as an angry black woman, the character takes on more and different meanings.”

Scrooge’s redemptive journey through Christmases past, present and future hinges on the plight of one of his oppressed workers, Bob Cratchit, played by D.Antwan Roper, and Crachit’s disabled son, Tiny Tim, played by sixth grader Marquis Erving. With a cast of nine, Roper, Erving and the rest of the players will double up on the small roles as well.

The age range of his cast was a welcome change for director Johnson, who has worked with college students and the kids in AWOL’s afterschool programs but never with the community at large. This production marks the first alliance between AWOL and the Dept. of Cultural Affairs, and he hopes the joint effort will become a winter tradition.

“We had these two productions going on every year, and it made sense to combine them by incorporating our AWOL kids into the theater of the whole community,” says Johnson. “Now we’ve got the kids with the adults and everyone is represented.”

The true meaning of Christmas is the moral of Dickens’ enduring tale, which Johnson believes goes beyond religion.
“It’s about the human connection, how we value morals, how we value family,” he muses.

He’s incorporated song, dance and special effects into the production, being staged in at the Black Box Theater at the city’s S.P.A.C.E gallery. Johnson says the intimacy of the theater helps showcase the humanity of the characters and the emotional charge of Dickens’ classic.

“In this small space, it hits you hard. It’s going to be a transformative night.”

A Christmas Carol presented by AWOL and the City of Savannah Dept. of Cultural Affairs