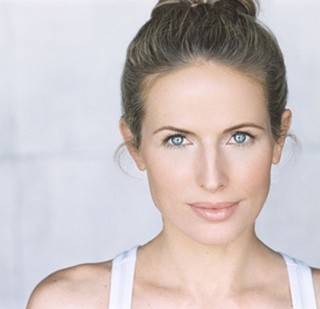 Refugio screens Wed. Oct. 26 at 4:30 p.m. at the SCAD Museum of Art. Sherk and Director Demian Bichir will attend the Q&A.

SHOT on location in New Orleans, Refugio is a sexy love story between a hot-blooded young man and an exotic dancer.

We spoke to Stefanie last week.

Tell us about this movie.

It’s about a very different, very unique young man who is one of these people who just shoots for the stars in trying to find ultimate love. He just never gives up.

I play a dancer named Kay. She’s one of these girls who has lost her way. She wanted to be a professional dancer, but ended up a stripper. That’s sort of her place to shine.

She meets Demian’s character and he helps her believe in herself again.

You are in this film with Eva Longoria.

Yes, Jose (Jose Angel Bichir, Demian’s nephew) plays another version of Demian’s character. In those scenes his love interest is played by Eva Longoria. She’s more experienced than he is and that sort of sets the stage for what’s to come.

People on a movie set don’t always work together because of how the scenes are filmed. Did you get much time on set with Eva?

We didn’t have any scenes together, but she’s been friends with Demian for a long time, and we became friends too. She is just the most impressive and positive strong woman. She’s one of these people who is always looking to help those around her. She stays very busy! She was nice enough to invite me on her show Telenovela. She’s an incredible woman and I can only aspire to how amazing she is.

Other than the pressure you put on yourself, what were the most challenging things about this particular role and script for you?

Kay goes through a lot of emotional stages that are very cathartic. Of course the biggest thing to deal with was having to play an exotic dancer. There’s nowhere to hide anything!

How do you really prepare for that?

The thing is, in LA that’s a really trendy workout class. You don’t have to go far to find one.

I did spend a week training with a professional pole dancer. She actually competes at it, she’s in amazing shape! I worked with her and learned the main two routines in the film over the course of a week.

My most nervous moment making the movie was that first shoot of a dancing scene. There was no nudity in it, but I was really trembling.

Tell us the truth: Did you do a couple of shots before doing that scene to loosen up?

No, it’s a pretty complicated routine with lots of really athletic moves. I don’t think that would have worked out very well!