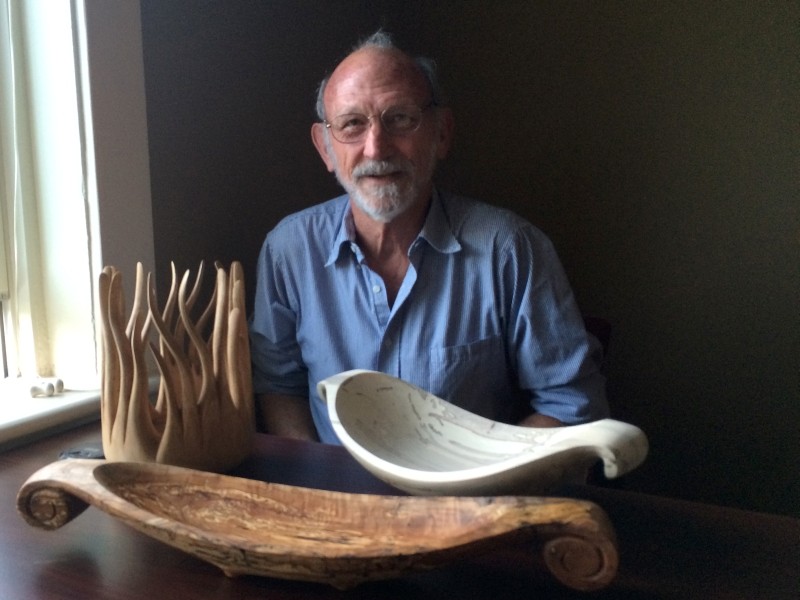 DICKY STONE awoke to the sound of a chainsaw one morning. Pulled from his home, he followed the roar to the promised scene—pieces of a downed tree.

“They’re putting it on the side of the road and I say ‘May I have some of that?’” Stone says.

The Savannah-native carves forms designed to reflect the coastal environment and showcase the natural beauty of the found indigenous wood.

Artist Dana Richardson also finds inspiration in things right around the corner from her home.

“I look at all the stuff I’ve painted and it seems to be a documentation of the area of Savannah that I live in on 40th street,” says Richardson, the Visual Arts Instructor at Savannah Christian Preparatory School.

“I find it fascinating. It’s so foreign to me still, just to see some of the colors of these houses with the bright sun. It whacks you over the head a little bit,” she chuckles.

Opening this Friday, April 10, is an exhibition of work by Richardson and Stone at the Hospice Savannah Art Gallery, a unique local art institution in a non-profit end of life care facility.

For about 15 years Hospice Savannah has showcased works by noted local artists. The gallery raises money for their Daily Impact Fund, supporting some of Hospice’s most potent programs, like a weekend grief camp for kids.

“Really to me it’s not so much about the money as it is about just getting people to come in here. It has a stigma that it’s a dark, scary place, but when they come, they say, ‘It’s so nice!’ So it’s a way to normalize it and get the community in,” says Beth Logan, Director of Marketing and Volunteer Services at Hospice Savannah, who also runs the gallery.

“I just think her work is very raw and organic really,” Logan says.

Richardson’s work focuses on Savannah’s architecture. She devolves the structures into minimal planes as precise and muddy as memories. In oils, she paints outside, reacting directly to the scene.

“I set up with no preconceived ideas of what I’m gonna do. It’s sort of like a meditation, being in the beginner’s mind all the time. I try not to rely on any technique even though I’ve had lots of schooling,” Richardson says.

“The only thing I’m really thinking about is just trying to be in the moment that I’m in.”

In addition, she will exhibit collages, which have a sharper graphic edge and play freely within the color wheel.

In both mediums, her compositions are striking, concentrating on intersections of space and harsh shadows. The works are small, intimate—almost voyeuristic.

“I’ve been doing small ones because I feel like they are little poems. Just like haiku sized,” Richardson smiles.

She’s just begun exploring larger sizes, but Richardson continues to be called to the scenes in her neighborhood.

“This is the only place I really want to paint,” she says.

Similarly, local trees of all kinds—pine, cherry, pecan, magnolia, holly and sycamore—call out to Stone.

He turns the wood on a lathe then carves into it, enhancing the form. Stone is best known for his “Sea Grass” series, capturing the movement and form of grasses in bowls, vases and platters.

Stone is a founding member of Kobo Gallery—an artist co-op reaching its nine-year anniversary—and a staple of the local art scene, but audiences can expect something new at the Hospice exhibition.

Shunning the lathe in favor of hand tools, he forged a series of oblong bowls. While simple, the flawless craft, the allure of the grain and the almost provocative symbolism of the form make a powerful impression.

“I know precisely what they do and it’s valued. They do great, great work in helping people through that transition to whatever is beyond, so anything that I can do to help them I think is awesome,” he nods respectfully.

This personal connection guides and permeates the work. The gentle curve of the bowls is like the nurturing arms of a mother. The shapes echo a boat, paralleling the final journey of Hospice’s patients.

“One reason that I only use only local and found woods is because a lot of this stuff is destined for the dump. It’s trash to most people. So there is a regeneration here,” Stone says.

“That is part of the process at Hospice as well, because depending on what you believe, that transition is a regeneration. It’s moving from the physical into the metaphysical, the spiritual, the soulful.”

Both Stone and Richardson are honored to be part of the Hospice Savannah tradition.

“What Beth has done is a really cool thing, bringing two entirely different ideas and concepts together in order to help with awareness and also to help with the fundraising,” says Stone.